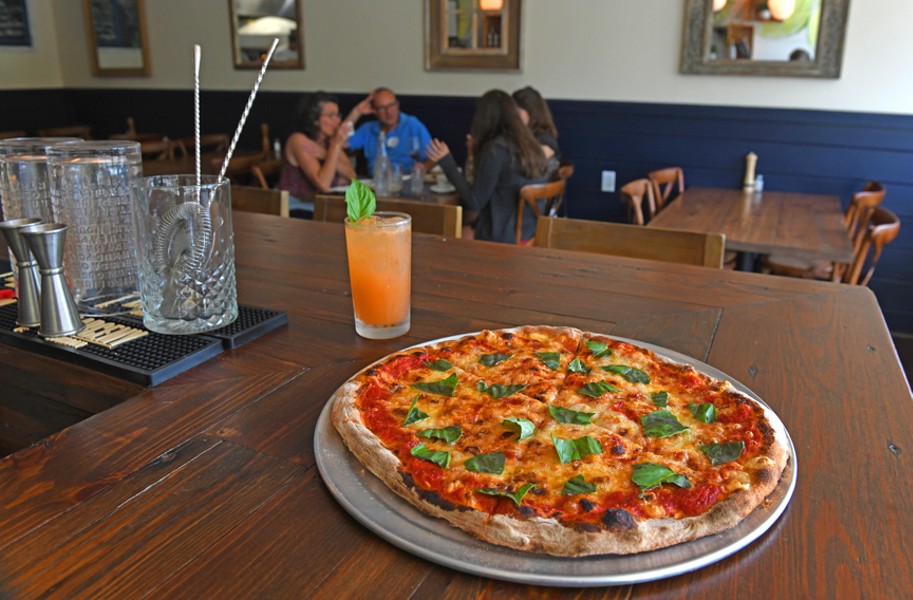 Just when you thought Richmond had reached peak pizza, yet another concept debuts.

Already we can have pizza with local beer, pizza with patio games, brick-oven pizza or pretty-close-to-Neopolitan pizza. Carmela's brings pizza for grown-ups to the table.

With cozy decor, a full bar and downtown location on the 17th Street Market near Main Street Station, Carmela's pulls in a diverse dining crowd that skews toward date-night couples, travelers and hip young families. The vibe is warmly neo-rustic, but the execution falls flat.

Kudos to Carmela's for rolling out a tight menu of pizza and classic bar drinks. No pasta, no eggplant and no subs. The cocktail list, menu and decor all work together smoothly to signal "simple, rustic Italian pizza." It's a welcome change from too many tastefully generic restaurants with huge menus trying to be all things to all people.

The pizza was the item we most enjoyed. The excellent crust was lightly charred top and bottom on the two white pizzas we tried — mortadella with pistachios ($14) and La Carmela ($13) with Parmesan "creme," arugula, artichokes, garlic and lemon. Both needed salt, but had good flavor with high-quality cheese.

Carmella's pizza crust deserves a shout-out. It's flavorful and chewy, but not tough, and it's just as good the next day. It's one of the best crusts in town.

But the pizza sauce is markedly sweet. Adding sugar to the tomato sauce is the kind of thing Domino's or Little Caesars does to appeal to the mass American palate, but sugar has no place on Neapolitan-style pizza. Not only does the sweetness mar many of the pizza flavor combinations at Carmela's, but the sugary sauce leaves glistening black burned blisters on the pizza crust, very different from the delicious char on the white pizzas.

On the prosciutto and arugula pizza ($14) the burnt-crust blisters gave it an acrid taste. Two of our guests declined to eat more than a few bites because the sweet sauce overwhelmed the delicate prosciutto.

The funghi pizza ($13) featured a scatter of raw mushroom slices, topped with a sprinkling of dried parsley and tarragon. It had zero truffle flavor from menu's promise of truffle oil. The crust bubbles were again burned.

The vegan margherita pizza ($11), declared very good by the vegan at the table, is made with Richmond-based Unmoo cashew-milk cheese. It was covered with giant fresh basil leaves, both pretty and flavorful. A drizzle of olive oil made it a little greasy when freshly served, but it was delicious the next day for breakfast.

Although problematic, the pizzas were far better than the few starters we tried.

Usually small plates are the most exciting dishes on a menu, but the Gorgonzola salad ($7) was simply boring, with hothouse tomatoes and romaine lettuce under a few folded slices of salami and surprisingly bland cheese squares. Like pretty much everything we tried, it needed salt.

Our server recommended the panelle ($6), chickpea fritters served with chili aioli. The sauce was tasty, but the small crescents were greasy and undercooked. One had blown up in the fryer, exploding the insides so that we only got the crispy shell, which was actually quite delicious.

We vastly preferred Carmela's bar seating to table service. Every time we visited, the bartenders were exceptionally welcoming, friendly and efficient. But on each visit there was only one server for the entire floor, and table service was painfully slow and badly timed. Our drinks took forever, and arrived one after the other, one coming after the appetizer. The server whisked by our table several times when we had questions, glancing at the table top but not noticing our raised hands and expectant faces. The drinks are refreshingly Italian inspired. I highly recommend the aperol spritz ($9) and Carmela's Way ($8), featuring vodka, grapefruit cordial, lemon and basil. Many of the cocktails are $2 off during happy hour. The classic Negroni ($10) is prettily presented over a single giant ice cube, but I was sad that Carmela's does not offer the trendy white Negroni, a cousin of the original with the liqueurs Lillet Blanc and Suze.

Our experiences at Carmela's were so uneven that one guest swore never to return. Two others would go back, but only at the bar and only for the white pizzas.

I'm on the fence. The welcoming space, solid drinks, friendly bartenders and view of Main Street and the pedestrian mall tempt me, but Carmela's needs to tighten up the execution to match its menu.