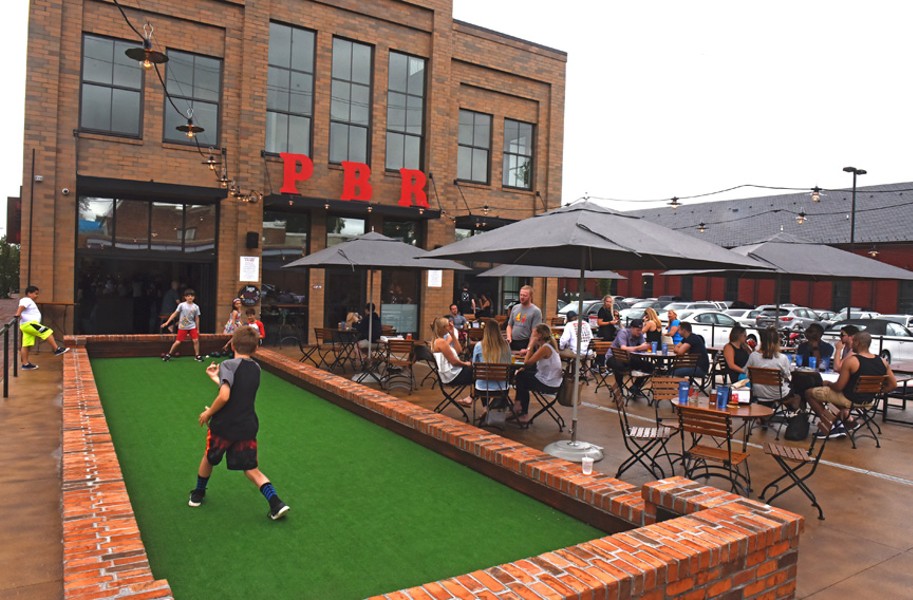 It should come as no surprise that a restaurant in the Fan serving pizza and local beer has cultivated an enthusiastic customer base — in less than a month.

Pizza and Beer of Richmond, in the Cary Street Station development at Cary and Robinson streets, opened a couple of weeks ago, and the neighborhood has gone bananas over it.

Walk by any time after 5 p.m. and the 2,500-square-foot patio bustles, baseball plays on the giant indoor TVs and folks sip beers while waiting their turn at the boccie ball court.

Affectionately shortened to PBR, it's the latest venture of Eat Restaurant Partners, which also owns such local spots as Foo Dog, Fat Dragon and Boulevard Burger and Brew.

Marketing director Chris Staples says the group had the location before the concept, and the giant patio space just called out for pizza and beer.

"The neighborhood sort of helped mold and dictate the concept," Staples says. "We wanted something at a lower price point that was still fun and still chic."

Staples describes the offerings as "elevated craft pizza" in a Neapolitan style. The gas oven was assembled in Maryland but the parts came straight from Naples, and the selection of pizzas include both classic and unexpected toppings. 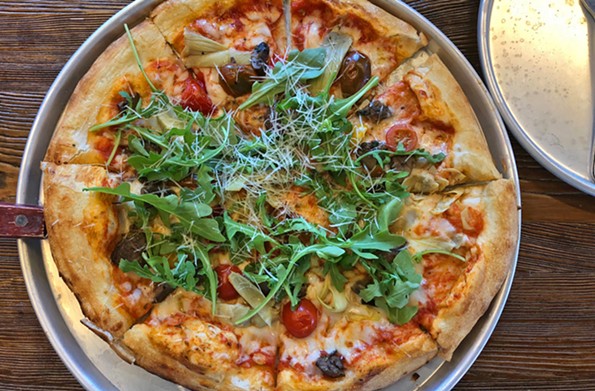 You can build your own, starting with a glutenful or gluten-free crust, at no extra charge. Available sauces include zesty tomato, Buffalo, spicy garlic ginger, pesto tomato and blue cheese. Between that and the meats, veggies and special toppings, you have more than two dozen toppings to choose from.

If you want to let them do the work for you, go for a specialty pizza. The Daisy Duke features sausage and Fresno peppers with fried eggs — yes, you read that correctly, and yes, the yolks are a perfectly silky over-medium.

Freshly-sliced basil tops the Moonstruck, and its sweet, caramelized onions balance the earthiness of the cremini mushrooms. There's also a burger-inspired pizza, with a mix of cheeses, meatballs, bacon, lettuce, tomato and onion, all on a base of burger sauce.

Once the pizzas are served, it's clear that these guys don't expect you to skimp on the Parmesan — the shakers on the table have long, wide openings, not those chintzy little pinholes that result in an unwanted arm workout.

With 48 draft lines, there's no shortage of options at the bar. About 30 of those beers are from Virginia, many made in Richmond. Staples says a handful of core local brews always will be on tap, like Hardywood Park Craft Brewery's pilsner, and the rest will rotate based on availability, such as the seasonal watermelon-rosemary from Buskey Cider.

But there's more to the menu than pizza and beer. Don't overlook the sandwiches made with freshly baked pizza dough, known as grinders. Appetizers include meatball sliders, crispy Brussels sprouts, oven-roasted wings and kale-artichoke-spinach fondue. Four salads, five entrees and three desserts, including Nightingale ice cream sandwiches, also are on the menu.

Red and white wines are available by the glass, and the 10 house cocktails are Richmond-inspired, like the Monument Mule, Gin Ginter and Forest Hill Fizz.

Staples says to look forward to some weekend "brunchy pieces" in the coming weeks, and a bloody mary with local Texas Beach mix is already on the cocktail list. Happy hour is 3-7 p.m. daily, with $1 off cans and bottles and $2 off drafts, wine glasses and rails. Keep an eye out for all-day Sunday specials.

The Lion Comes to Town

He's British, he's known as the Lion, apparently he's one of the nicest guys in the industry, and he's coming to Richmond. David Walker, who co-owns California-based Firestone Walker Brewing Co. along with his brother-in-law, Adam "the Bear" Firestone, will team with local chef Adam Hall to hold a six-course beer pairing dinner at Saison on Monday, June 11.

Tickets cost $100 per person, and you can reserve your spot by either visiting or calling the restaurant. The all-inclusive dinner will feature six of Firestone Walker's beers: a lager, Cuvee No. 2, Parabola, Sour Opal, Under Currants and Bretta Rose.

Gin with a Splash of Politics

You may have seen the news last week that Republican Rep. Tom Garrett won't seek re-election in the coming midterms. Garrett announced that he struggles as an alcoholic, and will instead seek treatment.

The first Virginia Republican to publicly announce his candidacy following Garrett's withdrawal is distillery owner Denver Riggleman. A former Air Force intelligence officer, Riggleman owns Silverback Distillery in Nelson County, which produces vodka, gin, rye whiskey and moonshine. It's about an hour and a half from Richmond, and if you haven't made your way out there yet, go ahead and add it to your day-trip list.