Into the Woods’ “Souvenir” is a touching comedy about the world’s worst opera singer. 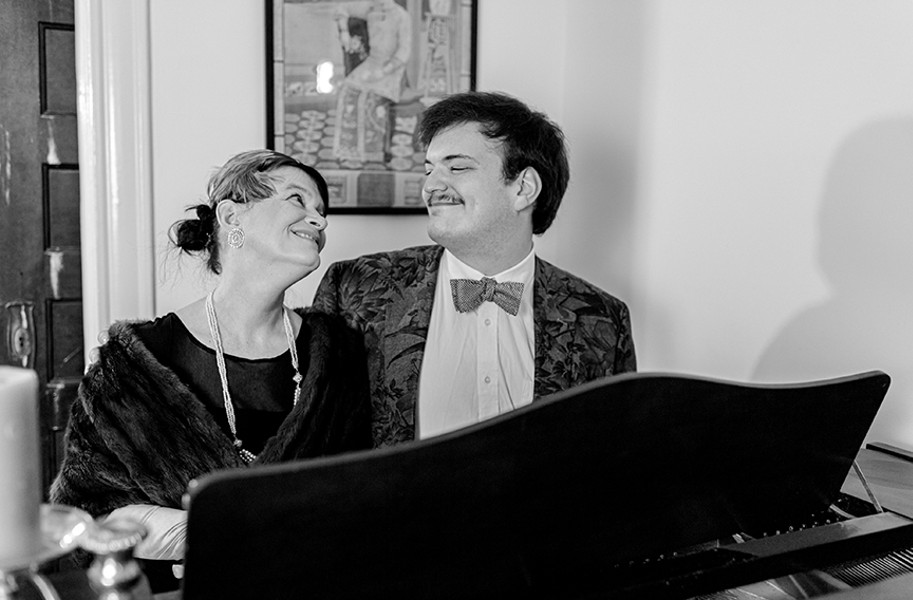 Was socialite and singer Florence Foster Jenkins in on the joke, or did she actually believe she could sing?

Ever since Jenkins began giving invitation-only recitals in the 1920s, her awareness of her own lack of pitch, tempo and ability to sustain notes has been up for debate. Detractors have called her “the world’s worst opera singer,” but she still had dedicated fans, including operatic tenor Enrico Caruso and composer Cole Porter. The latter, reportedly, would bang his cane into his foot to help stifle his laughter during her performances.

“She was just terrible, and she had no idea,” says Gabrielle Maes, who stars as Jenkins in an upcoming production of Stephen Temperley’s play “Souvenir” at her home in the Fan. “It’s really quite amazing how people can be so oblivious.”

An accomplished singer who won first place in a Broadway talent show in her native Canada and holds a graduate degree in vocal performance, Maes moved to Richmond six years ago with her husband and founded Into the Woods Productions, a nonprofit that stages musical works, including opera, cabaret and classical music performances.

Surprisingly, Maes says that despite her singing background, it’s not that difficult to purposefully sound like an alley cat attempting Mozart while being strangled.

“It’s easy to an extent, but there are these subtle nuances,” says Maes, who previously won a best actress award for performing “Souvenir” in Malaysia. “There are moments when she’s actually on pitch and sounds OK.”

Opposite Maes in the two-person show is local actor and musician Levi Meerovich, who plays Jenkins’ real-life accompanist Cosmé McMoon.

“It is a touching comedy about the worst opera singer of all time,” says Meerovich of the show. “It is a fun little romp through the music scene in the 1930s. There is opera, there’s jazz, there’s classical, and you get to hear some good singing, some bad singing, and you see a beautiful relationship unfold.”

McMoon, an Irish-Mexican-American pianist and composer who was also a bodybuilding judge and master chess player, never achieved a musical career after Jenkins’ death.

“He never had any success outside of Florence. He was a talented pianist and a somewhat talented composer, but his only big break was working with Florence Foster Jenkins,” Meerovich says. “You’d think that people would be trying to snatch him up, but nobody wanted him.”

Part of McMoon’s role, both in the show and in life, was running interference between Jenkins and the laughter of the audience.

“He’s doing his best to give her what she needs and help her sing the best she can,” Meerovich says.

Asked about dealing with Maes’ impression of Jenkins’s voice night-after-night, Meerovich says it’s something of an acquired taste.

“At first it was a little harsh on the ear, but [Cosmé] has a line where he says he started preferring the way she sang, and it’s kind of real,” he says. “When you spend a lot of time with somebody who sings a special sort of way, your ear gets accustomed to that sound.”

“The show is the story of two artists of varied talents becoming soulmates and crafting a life together,” she says. “We see their relationship grow and change, and how they support each other and how they hurt each other.”

“There’s some piece of her that might have known, but … it was a different time. There’s an irony that exists today that I don’t think really existed in her,” Burke says. “I don’t think she would put herself in front of people that way if she truly knew she was untalented.”

Even though her recordings sound like the basis for a Monty Python sketch, Jenkins would go on to play Carnegie Hall in 1944. Her performance at the 2,800-seat venue sold out weeks in advance and had an estimated 2,000 people turned away at the door. Both the audience and the critics were damning in their reception – a columnist for the New York Post called it “one of the weirdest mass jokes New York has ever seen” — and Jenkins suffered a heart attack five days later that would eventually kill her.

Still, the question of Jenkins’ self-awareness remains a mystery, and has served to inspire a documentary, a Meryl Streep film and this Broadway play.

“If you like opera, if you like jazz, if you like stories that are about redemption and love and understanding and partnership, you should come,” Meerovich says. “It’s a beautiful little story.”