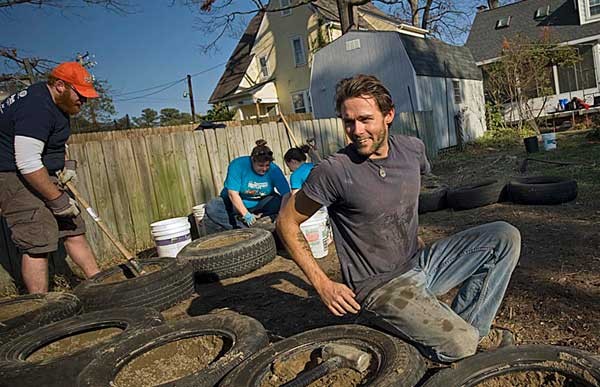 If you see a slight and scruffy man rummaging through your recycling bin, don't freak out. Eric Fulks is just looking for stuff to build his house with. And to build one for you, if you want. He aims to be an eco-ambassador, introducing Richmond to radically sustainable building techniques — constructing houses with tires, scrap lumber and other stuff you'd normally put out on the curb.

After losing a job as a carpenter in 2008, Fulks worked for the city parks department, where he was inspired by James River Park System Manager Ralph White's practice of recycling trash to earn money for the park. Fulks spent months abroad working as an adventure guide in Oman, Hawaii, and places in-between. Last year he became an apprentice at Earthship Biotecture, a New Mexico-based company that builds curvy, groovy, totally off-grid homes.

Fulks, 25, returned to his native Richmond on Dec. 9, penniless, homeless and carless — and bent on starting the building-with-recyclables movement here. He started a company, Bonzai Homes, to create these structures and give city dwellers a "conscious way of living with the environment and with their community."

On Saturday, about 20 volunteers show up to help Fulks lay the foundation of the model house he's building in the backyard of a friend's Westover Hills residence.

The house, where Fulks plans to live, will be a 120-square-foot L shape made of earth-packed tires, reclaimed lumber, glass bottles and what he calls "industrial papier-mâché" — a combination of cement and shredded paper. It won't need electric heating or cooling, he says. In an attached plastic-bottle greenhouse, Fulks intends to grow bananas and tropical fruit.

"The neighbors thought it was interesting," he reports.

He's also pitching bottle greenhouses to local elementary schools and building wigwams at Challenge Discovery, the adventure course in Doswell where he works in warmer seasons. In Philadelphia, Fulks is involved with a nonprofit, LoveLovingLove, that's trying to raise money for the country's first urban earth ship. Once it's built, he says, it will become an academy where people can learn radically sustainable building techniques.

"It's hard to be a prophet in your own land," he says. While other East Coast cities are beginning to embrace more sustainable ways of life, "Richmond is sort of dragging," he says. "Things are happening, but they're sort of slowly happening."

Correction: In earlier print and online versions of this artle, Style incorrectly identified Earthship Biotecture as a nonprofit. Also, Fulks has changed the design of his planned house, which is in Westover Hills, to an L shape. We regret the errors.