At Pho Saigon in Glen Allen, quality and complexity are in order. 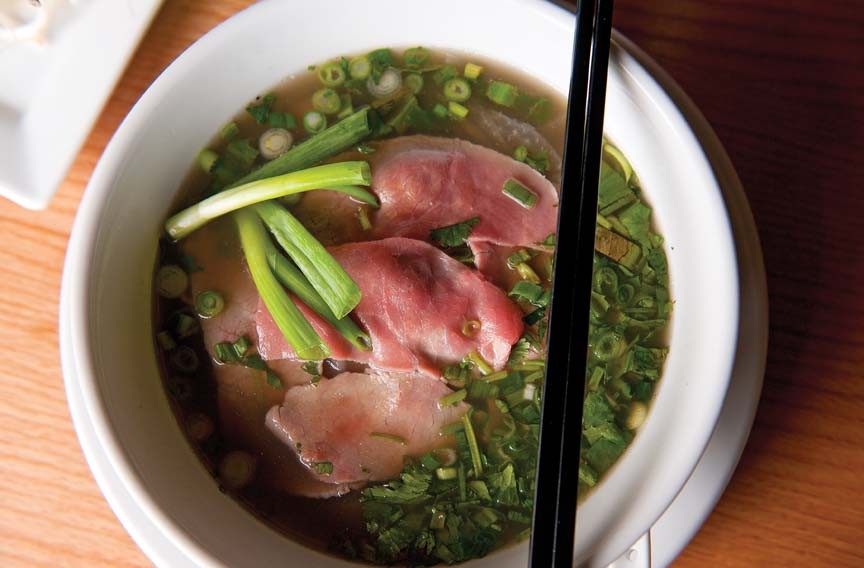 When I think of eating Vietnamese food in Richmond, I automatically think of one of the small restaurants near Horsepen Road — that strange and wonderful enclave of various Asian businesses in the near West End. Subconsciously, I've used location as a measure of authenticity, ignoring restaurants elsewhere.

However, farther out in the West End, tucked away in a nondescript strip mall, is Pho Saigon, a little gem serving southern Vietnamese cuisine. With a friendly staff, an approachable menu, and food that hasn't been dumbed down for Western palates, it achieves the rare combination of making foreign food accessible to Americans without compromising quality.

Pho Saigon's décor is simple but pleasant, with a few travel posters and conical-hat lamp shades to remind you of the food's country of origin. There's a bar with a few well-chosen American draft beers, and a larger number of East Asian bottled beers. Wine and sake are also available.

To begin your meal, although the spring rolls and dumplings are perfectly acceptable, skip the familiar and try the bôt chiên ($6 small, $8.50 large). An open-faced omelet is served with spongy fried taro squares, topped with fresh papaya, pickled carrot and daikon, and served with a piquant vinegar sauce to douse the whole dish. Bánh xèo ($6.95) is another excellent appetizer, an interesting combination of lettuce wrap and crepe. A rice crepe is stuffed with pork, shrimp and bean sprouts, and intended to be sliced, rolled in lettuce, and dipped in nuoc cham, a ubiquitous fish sauce with chili.

Pho, the namesake soup of the restaurant, is consistently well-executed and compares favorably with other local options. For neophytes, the soup is made of a unique and complex broth, usually beef-based, spiced with ginger, cinnamon, star anise, and filled with various cuts of meat and rice noodles. It is always served with a plate of toppings — mung bean sprouts, Thai basil, lime and jalapeño peppers. At Pho Saigon, you can be adventurous and order pho tái chín gân sách bò viên ($9.25), which includes tendon and omasa, or the third stomach of a cow, or you can play it safe with pho tái chín ($8.50) with eye of round and brisket. The pho chay ($8) is the best vegetarian version I've ever had; the complexity of the flavors isn't lost because there's no meat in the broth.

As popular as pho is, it's not my favorite Vietnamese dish. I prefer bún, a bowl of rice noodles, served with meat or tofu, pickled carrot and daikons, cucumber, bean sprouts and crushed peanuts, and accompanied by a bowl of nuoc cham. The light flavor of the noodles is set off by the sharp flavor of pickled vegetables, the richness of grilled meat, and a depth of flavor provided by the fish sauce and chilis. Pho Saigon has several excellent versions ($8.75-9.50), all nicely topped with a chopped fried spring roll which adds a crispy element to the dish.

The com ($9.25-$9.50), or broken rice topped with grilled meat and served with nuoc châm, is also a good choice, though on one visit the rice was slightly overcooked. This was one of very few problems I encountered over four separate visits. The bánh mì sandwich ($6.95) served with meat or tofu, is good, and while there are better versions in Richmond, this one comes with a small bowl of broth for dipping, which is a nice touch.

And for those of you tired of these standard Vietnamese menu options, Pho Saigon has other choices. For special occasions, you can call ahead and request a roasted suckling pig. The gà ragu ($11.75) is a tomato-based broth with a haunting spice profile I could never quite nail down and the kitchen wouldn't divulge. It's on the one hand unremarkable — chicken and a few vegetables in a tomato broth served with rice — but captivating for its departure from American expectations.

For dessert, try their excellent version of bubble tea ($4.50) in a variety of flavors (taro's a good choice) or the mango sorbet ($4.50), made in house and incredibly fresh tasting.

Despite my hesitation at eating Vietnamese cuisine in a Glen Allen strip mall, I was won over by the thoughtful menu and consistent execution. Now I'll make my way through the rest of the menu, and you may just find me there on my birthday trying out the suckling pig. S