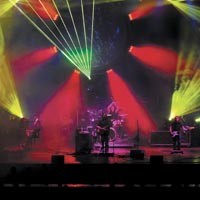 From the breakthrough “Dark Side of the Moon” to the 26-track concept record, “The Wall,” 1970s space-rockers Pink Floyd were about the grander arrangement. The band stretched effects-driven production and psychedelic experimentation beyond the boundaries of traditional rock. In an effort to extend the group's legacy, the Machine, a Pink Floyd tribute act, will bring its own level of epicness to the National on Saturday, July 25. The group performs the hits of its idol band accompanied by 40 members of the Richmond Symphony. That includes a laser-light show and “Dark Side of the Moon” played in its entirety. Doors open at 7 p.m. $30. 612-1900. — Mike Hilleary