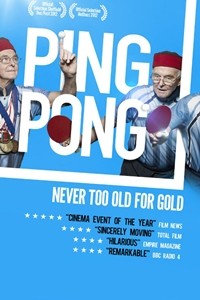 Les D'Arcy is a living legend. At 89 years old, he's obviously not received the memo about slowing down, and is going for gold, literally. He's headed to China to compete in the over 80s Table Tennis Championships in Inner Mongolia. A seven time world champion, he still lifts weights to train -- something he's been doing for decades, after surviving a sickly childhood. Of course, compared to some, Les is a spring chicken. Australian legend Dorothy deLow is 100, and finds herself a mega celebrity in this rarefied world. She'd better watch out though -- Texan Lisa Modlich is fifteen years her junior and is determined to do what it takes to win her first gold.

Sorry there are no upcoming showtimes for Ping Pong