Pie in the Skybox

We, the residents, are in essence being asked to act as bankers. 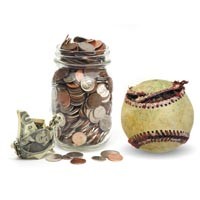 Why is everything we do in Richmond made more difficult than it has to be? We've all asked this question of ourselves over the years. Recently, where to place a baseball stadium has taken the spotlight in the local news. Once again we're at odds and polarized over an issue that can be resolved by reviewing numbers. It's simply math, really. You know, two plus two equals four, four plus four equals eight.

As a real estate developer, I look at numbers for a good part of my day, every day. So when Highwoods Properties was awarded the job to redevelop the areas around the Boulevard and Shockoe Bottom, I made it my business to understand its proposal.

By now, the deal is well known: The administration of former Mayor L. Douglas Wilder issued a request for proposals for both the Shockoe area and the Boulevard. Several developers applied and Highwoods Development won the bid.

It's important to remember that this is the same administration responsible for losing the Richmond Braves to Gwinnett County, Ga. Also, the city sought a deal that would bring development to two areas. This is highly unusual. Why would we not issue two requests for proposals, one for the Boulevard and one for the Bottom? The answer is simple: Time was not on Wilder's side. Wilder played chicken with the Braves and lost, and needed to claim victory before leaving office. In October, he announced that Highwoods, which proposed an office, retail, restaurant and hotel development called Shockoe Center around a $70 million ballpark, would make it all OK.

But the deal simply doesn't add up. First, Highwoods' projected retail and restaurant development is outlandishly overconfident. The developer's claim that it can build 192,400 square feet worth of retail and restaurants, and generate more than $78 million in sales, is simply not feasible. This is important because the sales revenues generate the taxes needed to pay for the ballpark.

Highwoods is asking the city to create a special sports authority that allows for the creation of a tax-increment financing district. The tax district is a mechanism that sets aside new taxes created by the development — such as the meals taxes generated by the $28 million in restaurant sales — to pay for the public improvements to the area and pay off the debt on the $70 million ballpark. We, the residents, are in essence being asked to act as bankers. By issuing bonds we are risking our bond rating and our real estate tax rate in order to finance a ballpark and a retail development that's unsustainable.

Numbers are what any deal boils down to and the numbers the developers are using to make their case are misleading. For instance, the developer projects retail sales at $400 per square foot. The malls in the far West End do not produce those numbers. An analysis of 2007 sales figures demonstrates that Short Pump Town Center produced $355 million in sales, or about $273 per square foot. But the real challenge is not projecting sales figures. Anyone can do that. The true challenge is walking the walk. Let's say the development does $273 per foot in sales like pre-recession Short Pump. Gross sales would be $52 million per year at Shockoe Center, which wouldn't be enough to cover the 30-year bonds on the $70 million ballpark.

Density, meaning population in and around the project, will be critical to the project's success. Henrico County studies from 2007 indicate that 27,163 people were living within one mile of Short Pump Town Center. Within two miles, there are 47,634 residents. The estimated population in the 23219 ZIP code, which includes the central business district and Shockoe Bottom, was 2,438 in 2007. Clearly, there aren't enough residents in the vicinity of Shockoe Center to generate the demand that Highwoods projects. The secondary argument developers make is that Shockoe Center will become a destination — that people will come downtown to shop. This raises additional questions. Why, for example, hasn't Cleveland-based Forest City Enterprises, which also helped develop Short Pump Town Center, been unable to attract more retail to accompany its Tobacco Row condo development in the Bottom? And secondly, do we really want another Short Pump Town Center in Shockoe Bottom?

The developers claim that Shockoe Center will generate a total of $8.9 million in tax revenue. This number depends upon a premise that retail square footage is leased, that restaurants are full, and finally, that the baseball games are consistently well attended. In other words, according to Highwoods, there is no downside. This presumption is outlandish. Retail sales wax and wane. And to claim that the baseball team will draw consistently high attendance given Richmond's lack of support for the departed Richmond Braves is disingenuous.

Can it work? Highwoods says it simply wants the chance to make its case. So why, then, is the city paying $100,000 to study the market for the developers? Mayor Dwight Jones has hired the same consultants who recommended moving the ballpark from the Boulevard to Shockoe Bottom in September 2008. That study didn't look at a specific proposal, such as Highwoods', and this one will. But why are we doing for Highwoods what it should be doing as part of its own due-diligence process?

All of this convoluted logic leads me to believe that we should have made this process easy for everyone. Look at Albuquerque, N.M., for example, which was in the same situation with its baseball team and stadium a few years ago. It had a good field but an antiquated stadium. The local government spent $25 million to build a new stadium for its Triple-A team. Average attendance skyrocketed and remains strong. We spent $500,000 on drainage problems at The Diamond two years ago. A few years before that, Richmond, Chesterfield and Henrico counties — not to mention the Braves — were in agreement on an $18.5 million renovation of The Diamond. It had regional support, was in a location that had a proven track record of success. And the taxpayers of the entire metro region had a stake in its success. Why are we allowing developers and team owners as well as independent consultants to tell us what we need?