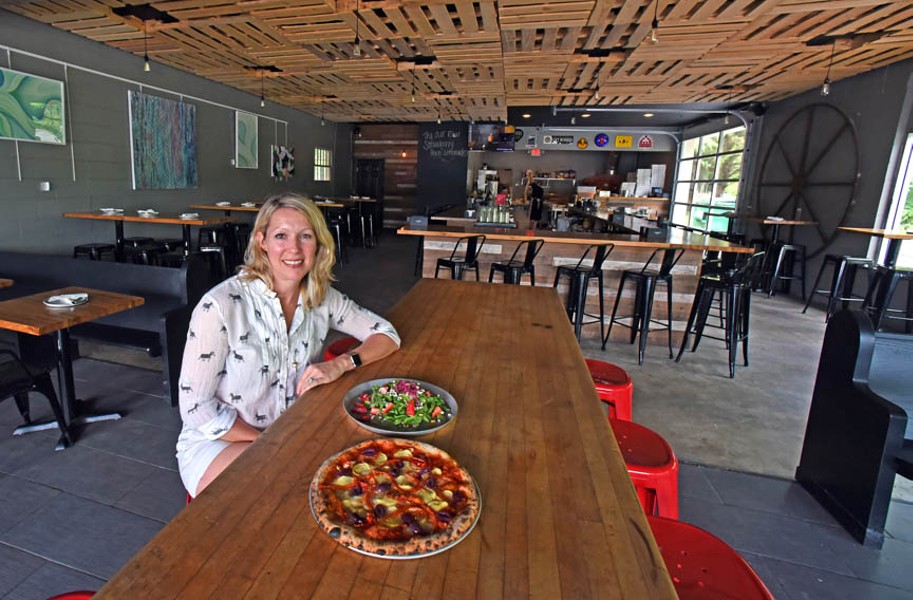 Scott Elmquist Owner Karen Verdisco has been pleased with the response to her Neapolitan-style pizza at Ashland’s Pie Hole.

First it was a convenience store, then a dry cleaner and an auto glass shop. Now, it’s Ashland’s newest pizza place, Pie Hole. After an opening in February, owner Karen Verdisco says the town has been very welcoming to craft beer and Neapolitan-style.

“There’s definitely not this specific type of pizza here paired with a craft beer influence,” she says. “There’s craft beer around the market, but we have the focus, the depth and tap set.”

In fact, Pie Hole has more than 20 taps of local beer, including hometown favorite Center of the Universe. The restaurant also recently held its first beer-pairing dinner with Isley Brewing Co., which Verdisco says was a success.

“We lined the side of the restaurant up and had about 30 people come in,” she says. “We’d like to keep it to a smaller size because of the capabilities of the kitchen and just have it a little more intimate.” Right now, the plan is to throw a beer pairing event every couple of months to help build on the beer program.

But it’s not just about the beer, Verdisco emphasizes. The Neapolitan-style pizza is also an exercise in craft — one that began with her family’s own experiments at home. She also owns Brew Gastropub in Chesterfield, which she describes as evenly split in its emphasis on beer and cuisine.

“This place [Pie Hole] is food-first,” she says. “The quality of the pizza we produce — I think that draws people into the restaurant. The craft beer is the complement to it.”

The menu is small right now: Pizza toppings include cured meats, interesting cheeses and curated vegetables. That’s partly by design and partly out of necessity, Verdisco says. The toppings are all fresh, but must be balanced against their water content. As for the dough, there are only four ingredients, and the pizza’s sauce is simply crushed tomatoes. The whole pie is baked at 900 degrees in a 6,000-pound brick oven.

“Mushrooms have been the most requested items. We’ve run it as a special but it takes some modifications,” she says. “I know we can do it.”

The rest of the menu is rounded out by salads and small plate appetizers. Starters seem right at home in a pizza parlor, with bruschetta and roasted Brussels sprouts leading the charge. The arugula salad looks fetching as it comes out of the kitchen on a small metal plate, sprinkled with pine nuts, goat cheese and pickled onions. The greens are joined by red strawberries. Verdisco’s plan is to expand the menu with more seasonal touches throughout the year.

She says that she and the staff have been flattered by the crowd of regulars that they’ve attracted — mostly families and students from nearby Randolph-Macon College. Pie Hole is also right off the highway, and Verdisco says that traffic has been steady in the five months of operation.

“We talked about doing delivery in the beginning, but the nature of Neapolitan-style pizza is challenging,” she says. “[Since it’s] fired at such a high temperature, when you deliver it, the integrity decreases. I would much prefer everyone to just sit down and eat it here. It’s the best way to experience it.”

And that experience won’t just be available to Ashland in a few months. A second Pie Hole is opening in Chesterfield County on Hull Street Road in August, Verdisco says. It will be a similar concept with a few refinements gleaned from the Ashland location. There’s room for growth in the suburbs for restaurants with craft beer programs, she says, especially if they can provide food that breaks out of the chain-restaurant mold. It’s the halo-effect of the groundswell of breweries and restaurants in Richmond itself.

“This is a nice sized restaurant for the town, and we do really well with the community. I’d like to stay in the suburbs,” she says. She knew they had hit on a working formula when a crowd showed up on opening day, and believes a similar approach south of the city could be just as successful.

“We love this concept and the community, and we’re excited to open another one in Chesterfield,” Verdisco says. “We’re anxious to start doing more with the beer program and incorporating into more specialized dinners and tap takeovers.” pieholepizzarva.com.