Pie Eyed in South Side 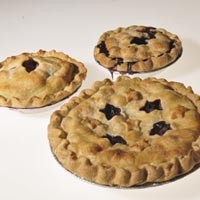 Forest Hill Park is a natural for the new-this-year South of the James market. It has parking, picnic tables, pastoral views and neighbors within walking distance who are fiercely house-proud and supportive of the market's presence in an underused part of the park on 42nd Street.
Cielito Lindo's steaming breakfast burritos usually sell out; a growing cadre of small growers moves plenty of flowers and herbs and anything just-picked. Artists, jewelers, tie-dyers and the occasional street musician are impressed by the crowds, which usually include appearances by City Councilwoman Kathy Graziano and assorted mayoral candidates rubbing up against egg sellers and chicken merchants and a legion of browsers and buyers, strollers and well-mannered dogs.ÿ
Equally impressive is the range of baked goods at the market -- we'll point out a few new vendors during the summer. First up, Sandston baker Tracey Winslow, who usually sells all 60 or 70 of the farmhouse pies (pictured) she bakes with her mother on Friday nights -- red, white and blue (strawberry, apple and blueberry), chocolate java splendor, lemon coconut chess and mixed berry, among others. They're small, but the $7 tab is a reasonable fare for time-traveling to grandmother's house A- with maybe a little jazzier pie filling on the inside, but that familiar retro-style shortening crust holding it together. www.simplysouthernpies.com.ÿ