A physicist takes a chance on the alchemy of the jazz combo. 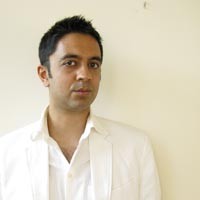 Does music matter? Cognitive scientist Steven Pinker, in his popular book “How the Mind Works,” wrote that “music is auditory cheesecake,” a biologically inessential “pleasure technology” that developed as a serendipitous byproduct of behavioral evolution.

This is nonsense to world-renowned pianist Vijay Iyer, who counter-argues that music played a crucial role in unifying and synchronizing human social development and continues its vital engagement with the world of ideas. He has the academic credentials to support his case, holding a doctorate in the arts and technology from the University of California at Berkeley, in addition to a master's in physics and undergraduate degrees in math and physics from Yale. But perhaps his most compelling ripostes are delivered in the performances and recordings that during the last decade have elevated the 37-year-old musician to the first rank of jazz composers and improvisers.

It's an unlikely triumph. “I never saw music as a serious option,” Iyer says by phone from New York City. “I think it's partly from being the child of immigrant parents who didn't come here to raise struggling artists. They tried to create an environment for us to have solid, stable careers.”

That's not to say he lacked musical training: starting at 6 and well into his college years he studied and played classical violin. His sister played piano, and Iyer picked it up largely on his own, albeit well enough to play in high-school combos. But eventually he had to make a decision between the solid-state certainty of a career in condensed-matter physics and the brilliant risks of creative expression.

“Eventually it became clear that I couldn't deny that music was what I wanted to do,” Iyer says, “but I am glad I had those years to find out about the rest of the world.”

Iyer's wide-ranging knowledge informs but does not constrain his artistry. His music is a structurally intense, engagingly passionate, polyglot discourse. Stemming from the deep traditions of jazz and the blues, his compositions are rendered in a vocabulary rich in Indian and African inspiration, spiced with the bracing unpredictability of the avant-garde. His recent work includes duets and quartets with longtime collaborator Rudresh Mahanthappa (most recently the excellent “Tragicomic”), the experimental power trio Fieldwork (“The Door”) and two highly entertaining and provocative post-9/11 projects with highbrow hip-hop artist Mike Ladd (“In What Language” and “Still Life with Commentator”).

A Jan. 21 Modlin Center performance will feature his working trio: Stephan Crump on bass and Marcus Gilmore on drums. “We've been together so long we don't have to have our faces buried in the sheet music, the process can unfold onstage,” Iyer says.

The egalitarian small group dynamics, in which the lead voice constantly shifts between players, provides an expressive freedom missing in larger ensembles. “It's structured but very warm and organic. … you'll hear a lot of originals, and standards recast in our musical language. Hopefully it will all come together and people will have an experience without a programmatic agenda. It's just about the flow of things.”

Among his influences Iyer cites the great South American fabulist Jorge Luis Borges. “His use of miniatures to develop gigantic ideas is an appealing concept that has inspired me,” the pianist says.

Moving from the intimate to the infinite goes in diametric opposition of scientist Pinker's reductionist explanations. “The fact is that we never really understand music,” Iyer says. “Whether it's Coltrane or Beethoven, it keeps creating meaning that exceeds anything we can capture. That's why we cherish it; it gives us something we can reach for.” S