A look back at some of Style’s most captivating images from 2019.

Scott Elmquist Jan. 12 — Shabina Shahnawaz joined about a thousand protesters at the Women’s Rights March RVA on the Boulevard. Photographer’s note: At rallies and marches, I am always looking for one person who tells the story. These events tend to be chaotic and it’s easy to be overwhelmed. When I saw Shahnawaz with her American flag hijab, I knew that out of 1,000 people she was the one. Nikon D750, 24-70 mm lens.

This year while putting together Photos of the Year, I relied heavily on Style’s Instagram feed to remind me what resonated with our readers.

The image receiving the most attention was the pair of bald eagles on the James River, with 71 people commenting. Photos of Kehinde Wiley’s “Rumors of War” sculpture unveiling in New York and its arrival a few days ago in Richmond came in a close second. The dedication of Arthur Ashe Boulevard with Mayor Levar Stoney surrounded by streamers and civil rights icon John Lewis giving a fiery speech also played well. The image of Markiya Simone Dickson’s uncle reaching down to touch her portrait at a memorial touched a nerve with readers. International metal star Randy Blythe’s kazoo band at the Capitol brought good response.

Others I’ve included didn’t get as much attention, but I feel they are among the strongest of my output this year. At a Unity Rally in July, Sheila Bynum-Coleman, then a candidate for the 66th House of Delegates district, was on the verge of tears listening to survivors of gun violence or Gov. Ralph Northam at the same event looking disgusted before the special session vote on enacting new gun laws. There’s also a couple huddled together sleeping in front of the Greyhound station, a Holocaust survivor protesting immigration policies and a young woman holding her naturalization certificate at the Virginia Museum of History & Culture.

When taken as a whole, a clear theme develops: This was a year of change, conflict and hope.

July 9 — Protesters and activists from both sides of the gun debate descend on the Capitol on a Tuesday morning.

Photographer’s note: This scene was chaotic with gun rights advocates and the opposition out in full force. When I saw this guy with the assault rifle and pistol I tried framing him with the Moms Demand Action participants walking by and the Capitol in the background, hopefully telling the story in one image. 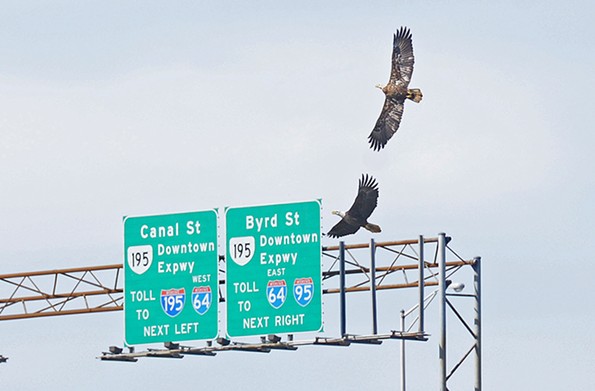 April 10 — A pair of bald eagles fly over the Manchester bridge.

Photographer’s note: I’d been watching the eagles all day long, off and on, near the 14th Street Bridge. I couldn’t get close enough, so I walked along the floodwall to near the Manchester Bridge. The eagles seemed to be fighting, doing amazing aerial maneuvers. They then swooped up over the bridge just happening to fly right over the highway signs, one of which says Byrd Street. Nikon D750, Nikon 80-200 mm. 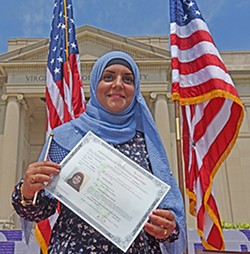 July 4 — Fatima Alawi Ali Musaid of Chesterfield became a U.S. citizen at a naturalization ceremony at the Virginia Museum of History & Culture. Her country of former nationality was Yemen.

Photographer’s note: Despite sweltering heat, a big crowd watched 100 people gain citizenship. I noticed Fatima early on but wasn’t able to get a good portrait. At the end of the ceremony she stood on the museum steps and posed with her citizenship certificate framed by the American flags. That was the shot. Nikon D850, Nikon 24-70 mm lens.

Photographer’s note: This was one of the most interesting events I covered this year. A kazoo band? The members of the “band” completely got into their mission. This wasn’t a half-hearted protest. The kazoo band drowned out everything Westboro was trying to preach. Nikon D750, Nikon 24-70 mm lens. 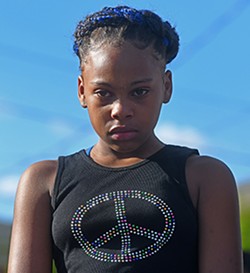 July 9 — As members of the General Assembly prepare for a special session on gun reform called by Gov. Ralph Northam, elected officials and community members address a crowd of several hundred at the Bell Tower, urging legislators to vote in favor of common-sense gun laws. Around the corner, gun rights advocates line up outside the Pocahontas building, many with pistols tucked into their waistbands and neon orange stickers with the words “Guns Save Lives.”

Photographer’s note: Having photographed Gov. Northam on dozens of occasions, I rarely see him angry, except for when he’s speaking about gun violence. When I took this image, he was listening to Richmonders recount their experiences with gun violence. Nikon D850, Nikon 80-200 mm lens. 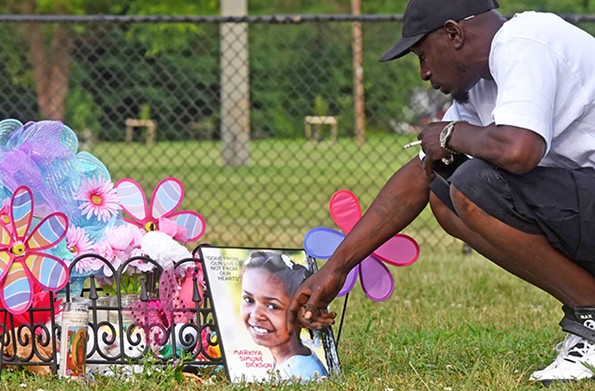 June 6 — Dion Tuell spends a moment at a memorial for his niece Markiya Simone Dickson in Carter Jones Park. Markiya was shot and killed at the park during a cookout on Memorial Day weekend. About 200 people gathered for a vigil in Markiya’s honor.

Photographer’s note: I knew when Markiya’s uncle knelt down and touched the portrait of his niece that the impact of the image would convey the heartbreaking nature of the story. Nikon D850, Nikon 80-200 mm lens.

Aug. 13 — Eleanor Ipson listens to speakers at Witness and Lament, an interfaith vigil in support of asylum seekers and immigrants at Temple Beth-El in Richmond. Eleanor’s husband, Jay Ipson, is a Holocaust survivor.

Photographer’s note: When I noticed Mrs. Ipson quietly sitting beneath the Star of David, I couldn’t help but think this could be 1919, not 2019. She possessed a timeless quality and the concern etched in her face perfectly illustrated the reason for the vigil. Nikon D850, Nikon 80-200 mm lens.

Aug. 13 — Holocaust survivor Jay Ipson stood with those who attended Witness and Lament, an interfaith vigil in support of asylum seekers and immigrants at Temple Beth El on Sunday afternoon.

Photographer’s note: Who is the character in the American flag and bald eagle tie? In many instances this might seem like an attention-grabbing stunt, but knowing Jay’s background as a Holocaust survivor, the sincerity of the attire was real. He’s lived through oppression and a fascist regime. The police officer behind Ipson adds a layer of seriousness to the portrait. Nikon D850, Nikon 80-200 mm lens.

Photographer’s note: This was a somber event, one marked by a collective resistance, but almost weariness too. There was no shouting or fiery speeches, just a calm resolve. Nikon 750, Nikon 24-70 mm lens.

Dec. 7-Workers stand on the pedestal of Kehinde Wiley’s “Rumors of War” sculpture at the Virginia Museum of Fine Arts, putting finishing touches on the installation.

Photographer’s note: I was busy the day the museum installed the sculpture so the next morning I got up early and went to the VMFA. Style was scheduled to run an article about the sculpture, so we needed fresh photography. When I walked behind the installation, I saw the workers and the sculpture silhouetted. This was a fresh view of a much-photographed piece of art. Nikon D850, Nikon 24-70 mm lens.

Photographer’s note: Lewis is a great orator and he brought down the house with his speech. This was a fairly easy image to make. The light was great and Lewis was animated. Luckily, I was on the right side of the museum steps when he turned and clenched his fists. Nikon D850, Nikon 80-200 mm lens.

July 9 — Shelia Bynum-Coleman listens to speakers at a Unity Vigil prior to a special session on gun legislation at the State Capitol. The lifelong Chesterfield County resident and mother of five was appointed by former Gov. Terry McAuliffe as the first black woman to the Board of Contractors, and she challenged Delegate Kirk Cox’s 29-year hold on the 66th District. For this candidate, the gun debate is personal. She told Style that day, “My daughter was shot in 2016 and she survived. But so many people have not survived,” Bynum-Coleman says. “We have to do something. And look at all of those people out here. People want to see something done. And to just ignore it and act as if it doesn’t matter is irresponsible.”

Photographer’s note: Coleman was listening to speakers share their gun violence experiences when this image was taken. I’ve been to hundreds of vigils and can tell you that look of horror in the eyes of Coleman is indicative of someone who has experienced gun violence firsthand. Nikon D850, Nikon 80-200 mm lens.

Nov. 2 — A kayaker cuts through the Hollywood Rapids on the James River.

Photographer’s note: I had a free morning so I walked over to Belle Isle to get some nature images. It was cold but the kayakers and rafters were out. This kayaker was with two others who were obviously skilled. They handled the rapids with ease and even paddled back up stream, pulled their kayaks over the rocks and ran the rapids for a second time. I used a high shutter speed to stop the action. Nikon D850, Nikon 24-70 mm lens.

Photographer’s note: Just as the Arthur Ashe Boulevard sign was unveiled purple streamers rained down. Fortunately, I caught a moment when the mayor’s face wasn’t obscured by the streamers and his joy was obvious. Nikon D850, Nikon 80-200 mm lens.

Sept. 19 — The Rev. Donte’ McCutchen of Love Cathedral Community Church preaches at a vigil for Jacob Jones. The 34-year-old member of the congregation was killed Sunday morning near the 6300 block of Jahnke Road.

Photographer’s note: This vigil was intense. McCutchen told me later it was his first. He put everything into the speech and it seemed like a sermon against gun violence. I knelt low in front of him and when his hands went in the air, I pressed the shutter. The reason this image is successful is because all the elements come together. McCutchen draws the immediate attention, but the layers of the image reveal multiple faces of despair. Nikon D850, Nikon 24-70 mm lens.

Oct. 17 — Huddled together against the cold temperatures, a couple takes a nap near the Greyhound Bus Station on Arthur Ashe Boulevard.

Photographer’s note: I was on my way to an assignment when I saw this couple in front of the Greyhound Station. I swung back around and parked at the Diamond. Since I didn’t want to disturb them, I used a long lens for this image. Nikon D850, Nikon 80-200 mm lens.