Our award-winning photographer looks back at some of his most memorable images from 2018.

Ta’Quan Grant, a Thomas Jefferson High School senior, marches on the Virginia State Capitol to protest against gun violence in schools during the Virginia National School Walkout Protest on April 20. The event was held on the anniversary of the 1999 Columbine High School shooting in Colorado

As the year comes to a close, two common themes emerged from our news coverage over the past 12 months: protests over women's issues and gun violence.

A thousand people took to the streets of Carytown for Women's March RVA on Jan. 20, the anniversary of the massive Women's March on Washington. They rallied for legislative action, voter registration and equal rights. When newly elected Gov. Ralph Northam donned a symbolic pink hat on that chilly January morning, Style's Instagram and Facebook followers went wild. The social media frenzy around Northam was surpassed only by the historic win of Democrat Abigail Spanberger, who rolled over tea party darling Dave Brat in November to win the 7th District congressional race. A grass-roots effort by women supporters, which the New York Times called an insurgency, helped propel Spanberger to victory.

Another glaring issue affecting Richmond involved fallout from gun violence, both local and national. The Parkland, Florida, high school shooting that killed 17 people prompted roughly 5,000 area students and adults to march from Martin Luther King Jr. Middle School to the Virginia State Capitol on March 23, fed up with the same tragic headlines and the same lack of meaningful action from elected officials.

A few weeks earlier, on Feb. 22, 500 people crowded into First Unitarian Universalist Church to honor the Parkland victims at a meeting of Moms Demand Action for Gun Sense in America, an advocacy group seeking a greater voice in the 2019 General Assembly session.

In May and June, protests were held to honor Marcus-David Peters, a high school teacher who, after leading police on a car chase and running naked into traffic on Interstate 95, charged a Richmond police officer and was shot and killed. Led by Peters' sister, Princess Blanding, hundreds of supporters marched on June 2 from VCU's Seigel Center to the Richmond Police Department on Grace Street during the Rally for Justice and Reformation, demanding accountability and policy changes from police.

In late October, hundreds filled a parking lot of the Jewish Community Center for a Night of Unity in response to the Squirrel Hill synagogue shootings in Pittsburgh that took the lives of 11 people, highlighting a growing sense of alarm over hate crimes that have spread since President Donald Trump was elected.

On Dec. 16 in eastern Henrico, about 20 people and several Henrico police officers gathered in the waning evening light to remember two teenagers, Leona Samlall and Vanessa Zaman, who were shot while walking along Airport Drive.

From large, vocal rallies in January and March to the quiet and reflective vigils of October and December, Richmond dealt with the same troubling issues that the rest of the country did, in a year of growing division like we haven't seen in years.

But local residents came out swinging and never backed down.

Students protest during the March for Our Lives rally at the Virginia State Capitol on March 24.

Photographer's note: Thousands marched on the Capitol to protest gun violence and to seek gun reform. The crowd was angry and this image illustrates that sentiment. What makes the image work beyond the emotional impact is the young boy to the left looking stoically up at the older boys.

Gov. Ralph Northam put on a pink hat at the Women's March RVA in Carytown on Jan. 20.

Photographer's note: More than a thousand people gathered in Carytown for this march, so it was a little chaotic. Richmond photographer Jesse Peters tipped me off that the governor had just arrived. Northam and first lady Pam Northam were immediately swarmed by the crowd. I was trying to get through the crowd when I saw someone hand him a pink hat. He hesitated for just a second and put on the hat. Luckily I had wrangled my way to a clear vantage point and was able to catch his expression.

Amour Dau, 12, attended the Families Belong Together protest at the Virginia State Capitol on June 30. The rally was in response to the Trump administration's policy of separating families at the border. Amour's mother fled war-torn Sudan 17 years ago.

Photographer's note: In the sea of protest signs I'm always looking for that one face that tells the story of an event. Amour stuck out among the hundreds of faces protesting that day. I purposely used a shallow depth of field to soften the background so the whole emphasis was her face and eyes. After I made this portrait her mother told me the reason they were at the event. She said without America's immigration policies she wouldn't be here and neither would her children, so they came out in support of the families affected by the administration policies at the border.

Omari Al Qadaffi, 37. An advocate for low-income communities of color, Al-Qadaffi has worked with residents on issues such as affordable housing, transportation, education and food accessibility. "The data show that there's this intersection between nutrition, academic performance and disruptive behavior," he says. "If you aren't eating well, then it's going to affect behavior and academics."

Photographer's note: Omari's not afraid of a fight. I watched him demand entrance to a press-only meeting at City Hall last year. Officials tried to keep him from entering. After a shoving match, he spoke and ended up shaking hands with the mayor. For this portrait I met him in Church Hill near 25th Street and Nine Mile Road. The light was harsh so we stepped into an alley. I liked the gritty nature of the brick walls.  People say "I don't smile enough," he said. I replied, "Well, you're dealing with heavy issues."

Photographer's note:  You just never know who's going to show up at a Confederate protest.  Helen Marie Taylor, wearing what looked to be a bathrobe, set up shop in front of dozens of anti-Confederate protestors and pleaded to keep the monuments. The power of this image is Taylor holding the sign with her hand raised like Jefferson Davis, president of the Confederate States of America, towering over her. The guy in the background holding the "No Shrines to White Supremacy," adds a strong element to the overall composition. Photographer's note: This was an upbeat occasion but the cadets' serious expressions and their rifles were sobering.

Photographer's note: Before work I often try to walk in a nearby park. I was looking for something other than a frozen leaf photo, when I noticed a single bird feather ringed with frost. I used my iPhone to make this image. I thought the feather was from a yellow finch, but a reader corrected me and pointed me toward the northern flicker.

Photographer's note: No BS Brass is tough to photograph because it's such a huge ensemble. For this image I knelt down in the photo pit at Friday Cheers. Pace came to edge of the stage and he was reacting to crowd's cheers. I like this moment of triumph, just him with his arm raised and the concert lights reflecting in his sunglasses.

Ammar Amonette, imam of the Islamic Center of Virginia addresses the crowd at the Night of Unity gathering at Weinstein Jewish Community Center on Oct. 30. The event was in response to the Oct. 27 mass shooting at a Pittsburgh synagogue that left 11 people dead.

Photographer's note: A reporter from a local television set up a small light below the speakers, creating an intense contrast between the speakers and the darkness. Style Editor Brent Baldwin texted me after seeing the image, saying: "I like this image because it clearly reads as darkness, and his expression is perfect for the national moment: Sadness, apprehension, but resolute [in their stand against hatred and gun violence]." On the first anniversary of the Unite the Right rally in Charlottesville, Rosia Parker raises a fist in the last light of day while Virginia State Police guard the Rotunda at the University of Virginia.

Photographer's note: I noticed Parker protesting earlier Aug. 11. and asked her to stand for a portrait as the light faded. I didn't want to use a flash, so I asked her to walk out of the shadows. Just as I was going to photograph her she threw her fist into the air. I was completely surprised because I hadn't asked her to. The light source is a nearby streetlight, which I balanced with a slow shutter speed to retain the beautiful blue evening sky.

The River City Magnolias performed June 9 at the Festival of the River on Brown's Island.

Photographer's note: I intentionally left my regular camera gear at home so I could attend the event with my wife and daughter. However, when I saw the Magnolias lined up watching other performers, I couldn't resist using my iPhone to make this image, which fell neatly together with matching swimsuits, sunglasses and yellow swim caps set against the red tents.

Maurice Tyler, organizer of Redemption Rally for RRHA, the Richmond Redevelopment and Housing Authority, pleads for help for people suffering from poor living conditions in public housing. The rally was in Gilpin Court, outside the authority's headquarters Jan. 9.

Photographer›s note: The evening was cold and rainy and I could barely make out Tyler's face through the viewfinder. I could see that he was crying and knew that would add to the power of the image. Shifting the image to black and white created a dramatic contrast, making the tears more visible. I used a Nikon D750 camera with an 80-200 mm lens from about 5 feet away.

Antonio Wallace marches during the Justice and Reformation rally for Marcus-David Peters in downtown Richmond on June 2. Peters was shot by a Richmond police officer after an altercation just off Interstate 95 in May.

Photographer's note: There are so many layers to this image, which begins with Wallace's sweat-drenched face and single rose on his sign. Then you see "help" and "He did not need a bullet." And then you notice Marcus's face, just beyond on a sign stating "We miss you Marcus." Also, the color coordination of the signs and clothing was remarkable.

Julia Paulette, 62, lives on First Street in Jackson Ward. "Only the good Lord knows where that storm is coming ashore." Sept. 11.

Photographer's note: I was sitting on a bench in front of Mama J's in Jackson Ward waiting to meet a subject for an upcoming story when Julia strolled up an sat down. We chatted about life in general and then about impending Hurricane Florence, which was due ashore in a few days. I felt like I known her for years, she had an easy way about her.

Brenda Patterson mourns the killing of two teenagers at a vigil at Oakmeade Apartments on Airport Drive.  Eighteen-year-old cousins Vanessa Zaman and Leona Samlall were walking along Airport Drive on Dec. 13 when they were shot.

Photographer's note: The vigil started at dusk so the light was fading fast. Luckily, a local cameraman set up a small light near the end of the vigil. That's when I noticed the tear on Patterson's face. I used a 200 mm zoom to come in tight on her face, hoping to illustrate the heartache caused by gun violence.

J.Z., also known as Mr. America, circles the pool during a children's costume parade at Canterbury Recreation Association on the the Fourth of July.

Photographer's note: I was lounging by the pool with my family when the kids started their parade. My regular camera gear was at home, so I grabbed this image with my iPhone. The costume was too good to pass up.

Slideshow Photos of the Year 2018 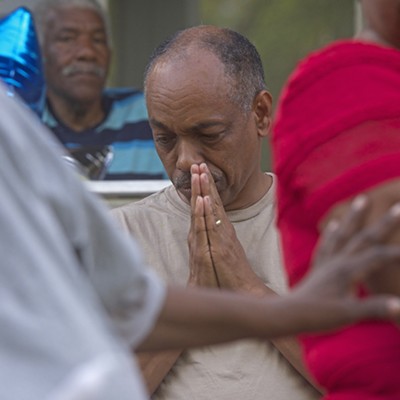