Style Weekly photojournalist Scott Elmquist chooses some of his favorite images from a busy year.

Photographer’s note: When I saw Sen. Chase step out of the black SUV and strap on an assault rifle, I knew I was witnessing an event unlike any other in my 30 years as a photographer. Surrounded by militia also carrying assault rifles, she walked to the Bank Street entrance of the Capitol and started addressing the crowd. The scene was surreal. A candidate for governor stood before the press in a public space calling for gun rights in a state where 1,000 Virginians die from gun violence every year. A state that carries the legacy of the massacres at Virginia Tech and more recently, Virginia Beach. 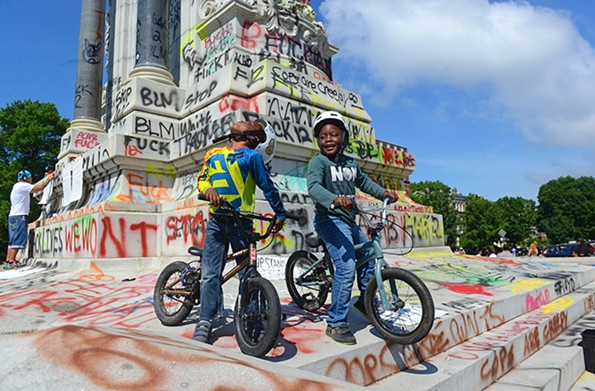 June 6: Devin, 7, and Mah’Ki, 6, take a break from riding their bikes on the pedestal of the Lee monument June 6.

Photographer’s note: I just happened to stop by the monument one Saturday morning and saw the boys circling the pedestal on their bikes. They were doing some pretty radical moves for being so young. After I posted this image on Instagram, people commented that the boys compete in BMX races. They race for the local team Rocket Racing. They are both 2019 state champions for their age groups. Devin is the 2019 winner of the Gold Cup, the regional competition for the southeastern United States. The boys’ Instagram page, bmx_bros_rva, replied to the Style photo: “Shredding For Justice!” Nikon D850, 24-70 mm lens.

Photographer’s note: Since I couldn’t get close to the nurses or the people, I used a 600 mm lens and waited for the test to be administered. You develop an instant respect for health care workers when you watch them in action. They do their job like clockwork, with care and precision. The whole operation was flawless. Nikon D850, Sigma 150-600 mm lens.

July 1: An image of Breonna Taylor is projected on the Lee monument as fireworks light up the sky.

Photographer’s note: This evening felt like a Fourth of July celebration. People were sitting around in lawn chairs relaxing and chatting. I used a slow exposure to capture the fireworks and to accentuate the light of the projection. Nikon D850, 24-70 mm lens. 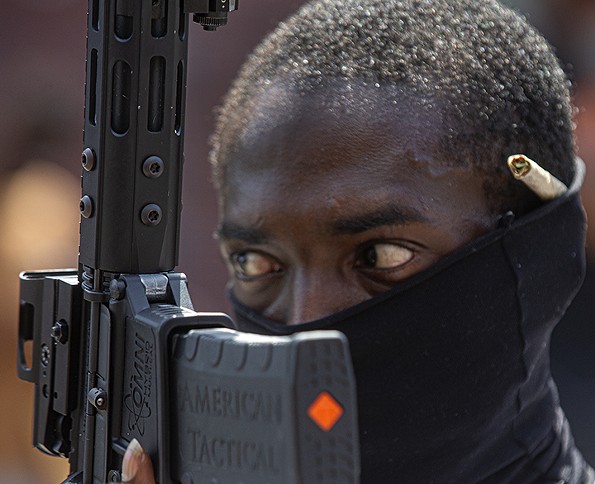 Photographer’s note: Black Lives Matter protesters occupied Broad Street in front of the Siegel Center, protesting to defund the police and to institute Marcus Alert measures. At least 30 gun supporters were also in the vicinity, plus the police. The scene was tense as many people were carrying guns. I noticed this man continually looking over his shoulder as Princess Blanding, Marcus-Davis Peters’ sister, spoke. Canon 5D Mark III, 80-200 mm len. 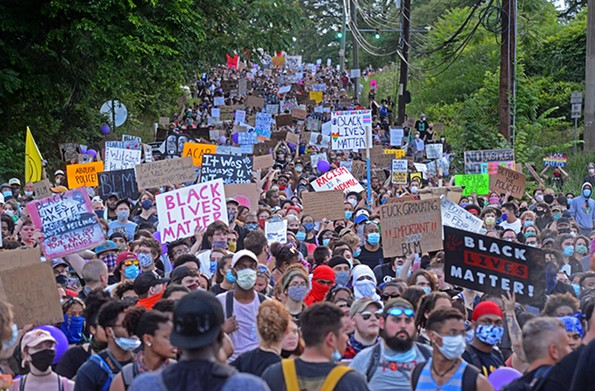 Photographer’s note: The grade of Hospital Street allowed me to take in the scope of the protest. Without the aid of a drone, photos showing big crowds are difficult. This image works because it shows the coordination of thousands of people to gather and peacefully protest. Canon 5D Mark III, 80-200 mm lens. 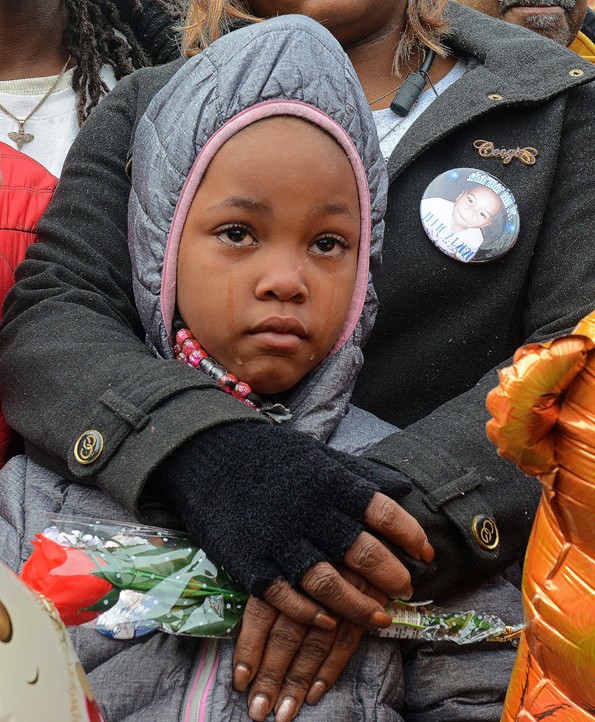 Feb. 8: Len’Neisha Smith, 7, listens to speakers during a prayer vigil for her younger brother Sharmar Hill Jr., 3, who was killed while playing outside when gunfire erupted in Hillside Court. He was caught in the crossfire. On Saturday afternoon, community members stood in solidarity with Hill’s family wielding red, green and blue balloons to celebrate the life of Simba, as his family affectionately called him. The child leaves behind his father, Sharmar Hill Sr., his mother, Shaniqua Allen, and five siblings.

Photographer’s note: There are few assignments as wrenching as a vigil for a child. My job as a photojournalist is to produce images that reflect the event. The child’s tears and the hurt in her eyes convey the devastation of losing a sibling, even at an age where gun violence may not be a comprehensible concept. Nikon D850, 24-70 mm lens. 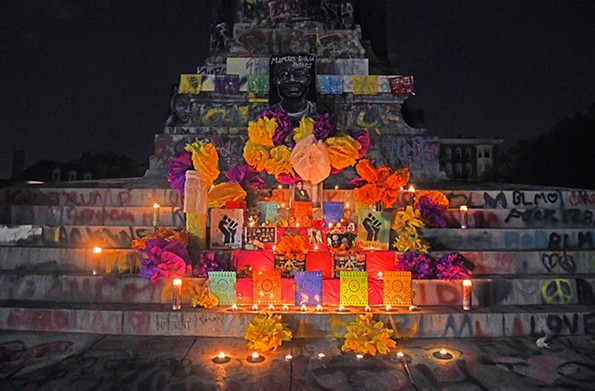 Nov. 1: Day of the Dead Shrine at the Lee monument created by Mariel Escalante and Dina Weinstein.

Photographer’s note: The beauty of the transformation of the Lee monument is you never quite know what you’ll encounter there. There was word on Twitter that there might be an altercation between protesters and police at the monument, but instead it was quiet and this memorial was present. Nikon D850, 24-70 mm lens.

June 19: Melachi Cobbs flies high for the dunk at the Lee monument on June 19.

Photographer’s note: I had just come off a week of furlough and was eager to begin documenting the protests again. That evening, there was a Juneteenth celebration happening at the Lee monument. The grounds were busy. Most people were gathered on the south side listening to speakers. I left the crowd, circled the monument and saw the young boys playing pickup. Just then the sun peeked through the clouds and provided great evening light. The hoop was aligned perfectly with the heavily graffitied monument. I knew when I made this image I was witnessing a sea change in Richmond’s history, as a young boy wearing an I Am My Ancestors’ Wildest Dreams shirt soared high on one of the most hallowed grounds of Confederate legacy. Only a few years earlier, I had photographed hundreds of people in the exact same spot with Confederate flags, at a Sons of Confederate Veterans heritage rally, so I never thought I would see this moment. Nikon D850, 24-70 mm lens. 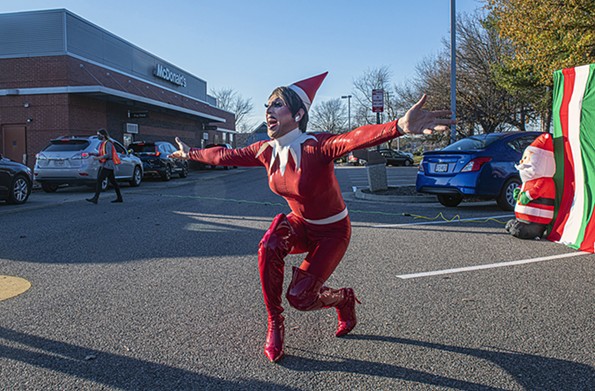 Dec. 11: Michelle Devereaux Livigne of Driveway Drag Show performed a drive-thru show at the McDonald’s at 9751 W. Broad St. All money raised went to the Ronald McDonald Charities of Richmond.

Photographer’s note: After a year of photographing gun rallies, coronavirus testing and protests, this event was fun to document. The people going through the drive-thru line seemed to get a kick out of the performers dancing to Christmas music in the parking lot. Nikon D850, 24-70 mm lens.

May 30: Richmond firefighters examine a burned out GRTC bus at Belvidere and Broad streets. The bus was set on fire late on Friday, May 29.

Photographer’s note: I was up at dawn to photograph the implosion of the Dominion building and made a quick image of the burned bus on Broad Street. The destruction of Broad Street was shocking with burned out buildings and dozens of smashed windows. Nikon D850, Nikon 24-70 mm lens.

July 1: A young man raises his fist in the pouring rain just after the removal of the Stonewall Jackson statue.

Photographer’s note: I was in complete disarray after covering this event. Both my cameras stopped working during the removal because of the rain and I resorted to using my iPhone at the very end. I was drenched and distraught. I was convinced I had blown it. About a week after the removal I was going through my files and found this image. It captures the reality of the moment and the emotion. The reality is the driving rain and the emotion is the subject with his fist in the air, pistol tucked in his pants, defiantly joyous despite the downpour. The camera quit shortly after these few last frames and now it’s permanently out of commission. Nikon D600, Nikon 24-70 mm lens.

Photographer’s note: One or two protesters grabbed the flag from a pickup truck that was circling the monument. They brought the flag to the base of the monument where it was burned. The scene was chaotic, so I was jockeying to get a good angle on the flag and people’s expressions without getting too close to the flames. Nikon D850, 24-70 mm lens. 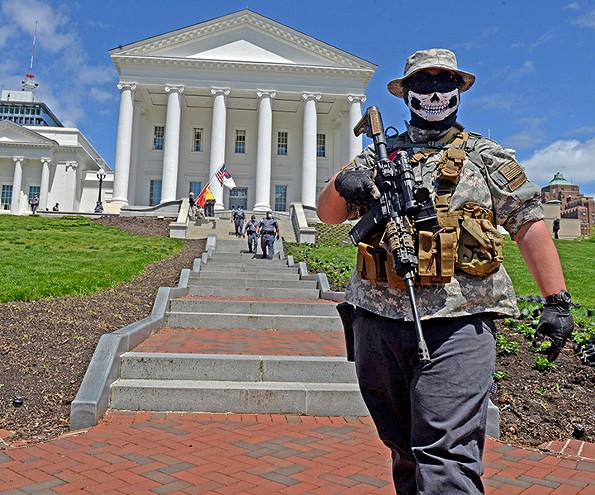 May 1: Members of the self-proclaimed Virginia Militia protested Gov. Ralph Northam and his shutdown policies at the Virginia State Capitol.

Photographer’s note: Anytime people with assault rifles converge on the Capitol it makes for a surreal scene. About a dozen heavily armed men left the initial protest on Bank Street and marched on the Capitol. I made this image as they were leaving. Capitol police directed them to leave or be arrested. Nikon D850, 24-70 mm lens. 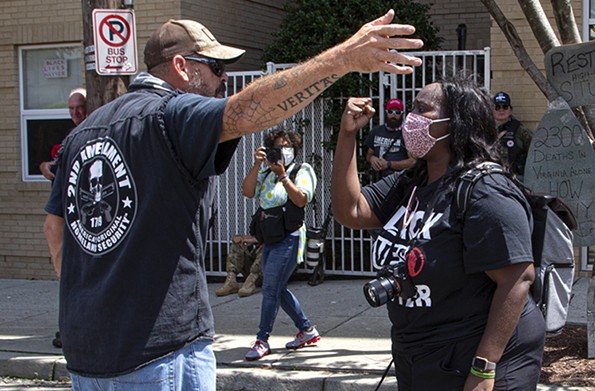 Photographer’s note: For the most part, the two factions avoided each other but these two had it out in the middle of the street. When Keisha raised her fist, I knew I had the moment I wanted. Even photographer Regina Boone of the Richmond Free Press floating into the frame adds to the drama of the image. Nikon D850, Nikon 24-70 mm lens.

June 7: Sedgric Hopkins, 11, celebrates his fifth-grade graduation from C.C. Wells Elementary School with a visit to the Lee monument.

Photographer’s note: Some of the most moving moments during the summer of unrest were at the monument when children visited. I saw Sedgric from a distance sitting on the monument and then he stood and raised a fist, where he was framed between the words “Blood on your Hands” and “Amerikka,” and I thought to myself: He will never forget this moment. Canon 5D Mark III, 80-200 mm lens. 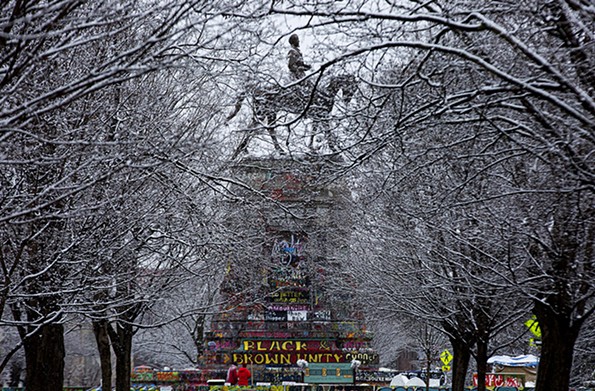 Photographer’s note: I was trying to figure out how to document the first snow since the transformation of the monument. The contrast between the monochromatic statue of Lee in the snow covered limbs and the vibrantly colored pedestal was what interested me visually. After walking around the monument several times I went down the median and saw this view. I waited about 20 minutes until a couple of pedestrians wandered into the frame. I just lucked out that they were both wearing red coats, which made them stand out. Canon 5D Mark III 80-200 mm lens.

Slideshow Photos of the Year 2020 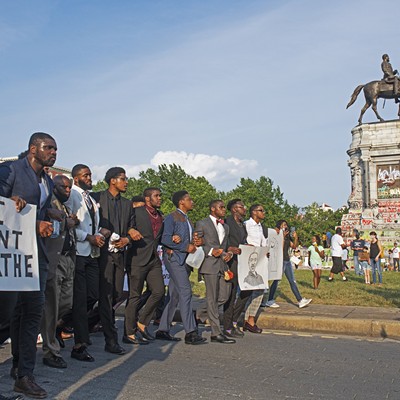 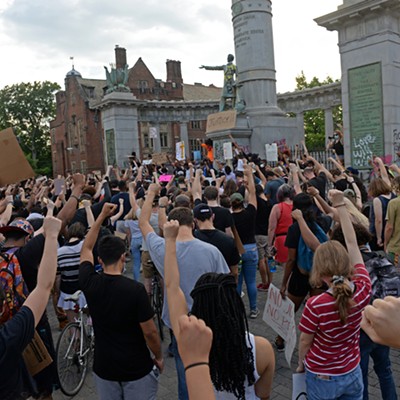