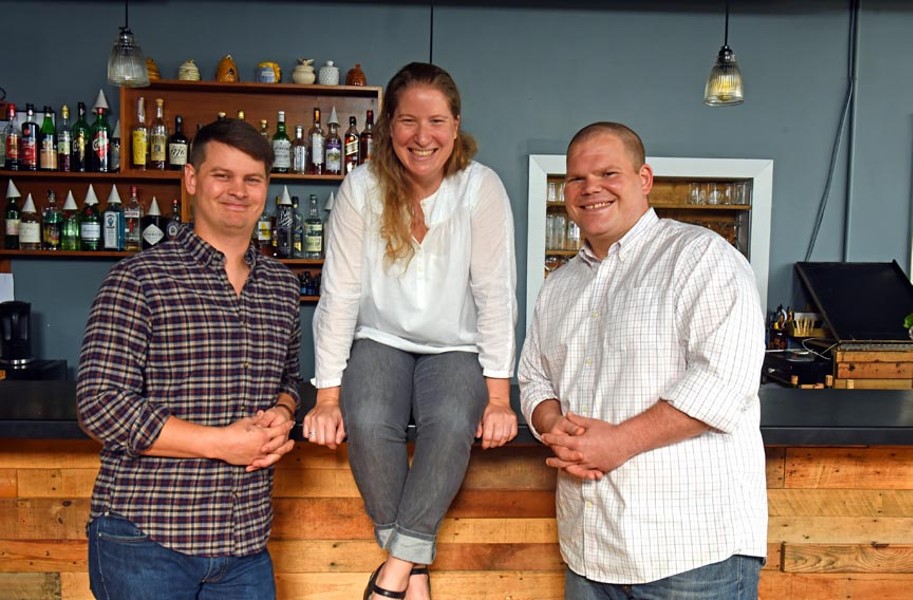 Running a restaurant is backbreaking work. The three owners of Church Hill restaurant Dutch & Company are there six days a week, as many as 14 hours a day.

It’s not glory that motivates them. It’s camaraderie.

“The way you move in the kitchen becomes fluid — there’s an unspoken language that you learn, and I think you immerse yourself in it for so long and for so many hours … that eventually it consumes you,” co-chef Caleb Shriver says. “And you can’t leave it. It becomes what you wake up for.”

The restaurant’s origin story is a long and tangled one. Michelle (then Peake) Shriver had worked with Phillip Perrow at Acacia. Then she moved to Chicago, where she met Caleb Shriver at the restaurant where they worked together.

They started dating; she returned to Richmond; Phillip met Caleb on a visit to Chicago… and eventually all three ended up here. Caleb and Michelle married in 2012.

For years, Caleb says, they talked about opening a restaurant: “nights out, having a drink, sharing ideas.”

In 2012, it happened. They fell in love with a storefront in Church Hill, and Dutch & Company was born. It’s become an integral part of the area’s changing scene.

It wasn’t a high-concept restaurant. Dutch & Company arose organically from its surroundings, becoming known as an intimate neighborhood place that served exceptionally good food. Accolades soon poured in. Food & Wine named both Caleb and Phillip as 2014 finalists for the people’s best new chef. Style named it restaurant of the year in 2014. And in 2016, the restaurant received the Elby award for Richmond’s best restaurant.

The team took it in stride and kept on cooking.

“They have this unique ability to get lost in the creativity of food,” Michelle says. When the chefs got a whole lamb in the kitchen, she suggested selling house-made hot dogs out of the kitchen door. The hot dogs became a Saturday tradition that drew block-long lines, and the trio decided to feed the fans in a new place down the street, Stroops Heroic Dogs. Aaron LeMire, who is now Dutch’s bar manager, created the craft sodas served there.

Perrow and the Shrivers have been generous to Church Hill. When nearby bakery Sub Rosa caught fire, the owner sent his pastries to Dutch & Company so they wouldn’t be wasted. The team held an impromptu bake sale to benefit Sub Rosa — and when the pastries ran out, neighbor WPA Bakery contributed more. Dutch & Company also has contributed food to such nonprofits as ChildSavers and the Doorways.

The three owners are known for supporting their staff’s endeavors too. They’ve helped a dishwasher become front-of-house manager at Stroops, and cheered on former servers as they opened their own businesses. Former sous chef Travis Carraway recently left for San Francisco. It was hard to let him go, Caleb says, but he was proud. It’s like being a parent, he says: “This isn’t about just me anymore. This is about all of you.”