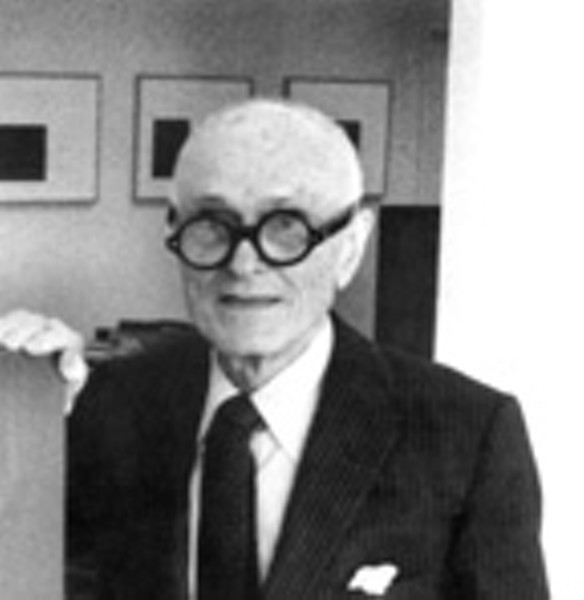 He joined Jacqueline Kennedy Onassis in successfully leading the public outcry to protect Grand Central Terminal. Johnson hated the maple trees that line The Lawn at the University of Virginia, where he'd served in an advisory design capacity. "Those trees are wrong. ... We really don't know if Jefferson wanted them there," he said in a 1984 conversation. "Since they ruin the view across the Lawn, I want to cut them all down."

Johnson also had the freedom to pick and choose his clients. He could experiment architecturally, shift gears, or move in different directions as the decades rolled by, and design movements evolved and dissolved.

In 1958, with Mies van der Rohe, Johnson designed New York City's icily perfect Seagram Building. Its Four Seasons restaurant is one of Johnson's masterworks. By the late '70s, when he felt the stark International Style had run its course, Johnson embraced postmodernism. His AT&T building (now Sony headquarters), with its broken pediment topping, is now a beloved Manhattan skyscraper. He later took a few expressionistic cues from Frank Gehry in his spiky addition to the Chrysler Building on East 42nd Street.

In 1979, he politely and cleverly said "no" to Richmonders Sydney and Frances Lewis and their son Andrew (the founding family of the former Best Products Co. Inc. catalog retailer) when they invited him to design a store prototype that could be built nationwide. But always one step ahead, he suggested he would handpick — Johnson the arbiter — five young architects, "kids to my generation," he said, who would devise architectural plans as witty and evocative as those Best had commissioned from SITE, Venturi Rauch Scott-Brown, and Hardy Holzman Pfeiffer. He then suggested that these proposals might form an exhibition at the prestigious Museum of Modern Art — Johnson the impresario. The installation would be done by his life partner, designer David Whitney — Johnson the keep-it-in-the-family man.

Johnson discussed this approach with the Lewises at the Four Seasons' table No. 32, where Johnson held lunchtime court legendarily for nearly half a century. "Buildings for Best Products" was the resulting exhibition and included showroom designs by Michael Graves, Allan Greenberg, Charles Moore, Stanley Tigerman, Anthony Lumsden and Robert A.M. Stern. After its MoMA run, it was exhibited at Virginia Commonwealth University's Anderson Gallery.

Some years earlier, however, John Tansey, the irrepressible general manager of Richmond radio station WRVA, had been more persuasive with Johnson. Tansey hounded Johnson until the architect agreed to design a new studio atop Church Hill, a neighborhood undergoing dramatic restoration.

"That was in the mid-60s and I had no work at all," Johnson recalled in the 1980s. "The site was at the edge of a ravine [Shockoe Bottom] and looked out over the city. They had no money. It was just a radio station, and all you need is a room and a tower. But somehow I conned them into thinking it would be nice to see it from the other side of the ravine."

Indeed. Richmond has too few late-20th-century architectural gems, but this is one of them. Johnson's genius at WRVA was combining the three architectural traditions most applied here. First, the building sits atop the hill like a classical temple on an acropolis. Second, the building is picturesque with its tower — or campanille — punctuated by large openings to create a pleasing silhouette on the East End skyline. Finally, the building is in-your-face modern with poured-in-place concrete walls and huge plate-glass windows: The window openings read from many blocks away. From the inside, radio personalities could look out over the city. This architectural combination is remarkable in its sweep, and the fact that modernism took root on Church Hill was a statement that Richmond didn't have to be mired in the past.

Not that the process didn't have its problems.

"It was my first and last time to use poured-in-place concrete," Johnson later said of the experience. "It's a miserable material."

Buford Wood, a former vice president of contractor J. Kennon Perrin Company, recalls the experience vividly: "John Tansey kept complaining about the ripples in the [outer] white aggregate cement. They had been giving Johnson hell to do something about it."

"I was balled out," Johnson later recalled. "He watched every little detail."

At the building's dedication in 1968, according to Wood, when Johnson's car arrived at the event, the building was flooded with sunlight, so no waves were apparent. As the maestro emerged from his car he exclaimed to outstretched microphones and waiting reporters, "My God, this is the prettiest building I've ever seen in my life!"

Johnson had produced his sound bite and Tansey relaxed.

But after the luncheon, the sun had shifted and ripples in the concrete were glaring. Wood says as Johnson climbed back into his limo the architect was fuming: "That's the worst-looking building I've ever seen."

But Johnson always looked forward. In his introduction to the "Buildings for Best Products" catalog, he concluded: "The most exciting part of the story is to come. What happens next?" — Edwin Slipek Jr.