Special/Signature Issues » Folk Used to Be a Bad Word 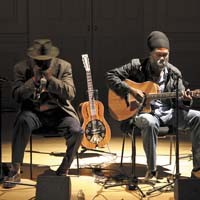 When veteran Piedmont blues guitarist John Cephas died in the spring, his sideman, harmonica great Phil Wiggins, had a decision to make. After 34 years of playing with a master, what comes next?

“I've gotten to know quite a few good musicians over the years, so my only conscious decision, now that I have that opportunity, was to go about [playing] in an organic way. To call more than a few old masters and the young crew,” says Wiggins, of Takoma Park, Md.

It's looking like a major part of future collaboration efforts could involve Charlottesville-based performer Corey Harris — the acclaimed young guitarist and singer who won a MacArthur “genius” grant in 2007 ($500,000 over five years) for his work pushing traditional blues forward through a melding of world and reggae influences.

While there have been discussions with Smithsonian Folkways Records, there are no definitive plans for a recording between the two. So people in Richmond may be getting a preview of future studio collaborations (or a never-to-be-repeated experiment), not to mention a few never-before-heard original tunes Wiggins has been storing up through the years.

“Corey is a powerful musician with strong rhythm and vocals,” Wiggins says. “The music we'll be doing is both Piedmont and Delta-rooted, but he's got the West African and Malian guitar influence and reggae — really young energy and hard driving.”

In the future, Wiggins says he may call older masters such as North Carolina's John Dee Holman, Louisiana Red or Robert “Wolfman” Belfour of Tennessee, but for now he's looking forward to the Folk Festival gigs with Harris.

“I don't know if I have enough time left on this planet to learn how to play as well as John and I played together,” Wiggins says. “But with Corey, I can experiment with different approaches of accompaniment whereas John's voice was beautiful and gentle and a lot of times when he was singing, I had to be careful not to overpower him. It would be hard to overpower Corey.”

Folk Used to Be a Bad Word