Phasing In, Dining Out

Richmond enters Phase 1 of reopening as the governor issues a statewide mask mandate. What does it mean for restaurants?

A dozen Mobjack oysters arrive cool and slightly gritty, cocktail sauce and a tart mignonette tucked amongst the shells. Hole in the Wall Grill, on Gwynn’s Island, has been open for outdoor dining since Thursday, May 21. The properly distanced picnic tables begin to fill around noon on Memorial Day; a masked hostess directs patrons to a large, handwritten menu featuring said oysters, crabcake sandwiches and Reubens. A boozy Star Spangled lemonade is only $8.95.

But a few days before it was raining, and owner Mac Casale had no dine-in guests. “It’s a very bad equation, really,” he says. “We can only do 50% and just outside – compared to Friday last year we’re down 74 percent.”

Restaurateurs the world over are grappling with how and when to reopen as they receive the go-ahead from the proper governing bodies: Is it safe for staff, for customers? What makes the most sense financially? How do you comply with strict regulations and create an atmosphere where oysters can be enjoyed on the half shell?

While most of Virginia entered Phase 1 on May 15, Richmond Mayor Levar Stoney requested a two-week delay for Richmond based on the percent positivity of the virus not yet trending downward. As of Wednesday May 27, Stoney announced that Richmond would move into Phase 1 on Friday, May 29, citing a flattening of percent positivity over the past seven days.
For Virginia restaurants, mandatory Phase 1 requirements include things like posted signs, 50% maximum capacity, outdoor seating only and parties of no more than 10. All staff must wear masks.

On May 21, grassroots group Richmond Restaurants United wrote a letter to the mayor, asking for further reopening guidelines – including details on restrooms, trash and indoor dining spaces – in addition to those applicable across the commonwealth. It also asked that the mayor request Phase 2 and 3 guidelines from the state as soon as possible, so that eateries can ready their business models.

The governor has yet to release these guidelines.

The president of the Virginia Restaurant, Lodging & Travel Association, Eric Terry, also wishes there were better “communication and transparency” from the mayor’s office regarding Phase 1 guidelines. The announcement about the postponement of the city’s reopening came on the eve of the rest of the state’s reopening. While Stoney says this delay was because the state was late in sharing requested data, businesses were left in the lurch.

“The delay in moving to Phase 1 was decided literally hours before restaurants could have reopened outdoor dining at 50% capacity, and restaurants were left scrambling with excess food and staffing issues,” Terry says.

For its part, the city of Richmond is offering businesses free reopening tool kits with protective gear valued at $80. Restaurants can register for their kits online, and print out handy reopening checklists, too. The city has also implemented a task force to review applications for new or expanded outdoor seating – arguably one of the greatest obstacles for many small, downtown establishments.

“If you walk or jog or drive, you’ve seen, since the beginning of the pandemic, our city has still been alive, practicing social distancing,” says Bobby Vincent, the city’s director of Public Works. “Why not continue with that beauty, even at a reduced capacity, so local businesses can have citizens remain safe but also patronize their restaurant.”

Vincent says the sidewalk cafe applicants – 20 businesses applied in the first 24 hours – are a combination of spaces that have some outdoor dining they’d like to expand and businesses that would need to occupy an adjoining space, like a parking lot. The permit was already extant, the city is now just expediting the review and approval period. Public Works is teaming up with Parks and Recreation and Planning Development and Review, with consultation from the Police Department and the city attorney.

“The goal underlying the entire program is to get businesses and the community to a place of viability as quickly and safely as we can,” Vincent says.
Speed and safety are rarely compatible, but small businesses are digging in and looking ahead, ambidextrous in a time of crisis. “We’re trying to proceed with an abundance of caution,” says Jay Bayer, co-owner of Saison, Saison Market and Bingo Beer Co. “Business owners have a higher risk tolerance than everyone else, it’s trying to take my perspective and willingness to accept some risk and let everyone know we are doing everything we can to reasonably assure their safety.”

Bayer jokingly, but also accurately, draws parallels between a fractured romantic relationship and the trust both restaurants and patrons are trying to build with each other right now.

As part of the best practices guidelines – not mandatory but suggested – Stoney is asking that restaurants keep logs of all patrons who dine with them. This data will then be turned over to the Richmond City Health District to help with its contact-tracing efforts. Style has requested information about how and where this data will be stored.

Yet another promise consumers and businesses must keep started May 29, when Northam’s statewide mask mandate went into effect.

Virginians are required to wear a face covering – a mask, scarf or bandana – in all indoor public settings “shared by groups of people who may congregate within six feet of one another or who are in close proximity to each other for more than ten minutes.”

Virginia joins portions of 39 other states requiring face coverings in public. While other localities are issuing fines and jail time for those who ignore the mandate, Northam says criminal action will not be taken. Instead, the Virginia Department of Health will be the mask enforcer. When asked about enforcement in his May 26 news conference, Northam said for action to be taken, a business would have to be “grossly negligent,” or “willfully negligent” regarding the rules.

But what happens to individual offenders who refuse to follow the rules of an establishment? Are health inspectors called to intervene? We’ve seen the viral videos of recalcitrant people bucking the system – will a brawl break out?

Such hypotheticals are not included in any of the state or local guidelines for reopening, and of course it is impossible to predict how people will react. We’ve reached out to Richmond’s Health District for more clarity on how the mask mandate will be enforced.

Once trust is re-established, with patrons and businesses both keeping up their ends of the deal to follow rules and implement them properly, the question remains – is it safe to dine out?

In a May Eater article “Is It Safe to Eat at Restaurants Yet?” writers Monica Burton and Jenny G. Zhang extensively explored all angles of the issue, from restaurant ventilation to cash versus credit cards, concluding that, “there is no absolutely risk-free way to eat out right now.”

Common sense tells us that we should not congregate with very many humans in a small space for very long. All of this, in much more detail, is laid out in Virginia’s Phase 1 guidelines. The easy answer is yes, you can still get sick outside of the confines of your home, but as food safety specialist and N.C. State University professor Ben Chapman explained to Style in March, restaurants are better equipped than most when it comes to sanitation.

“The thing that is fortunate in the food realm is, we are always worried about food borne illnesses so that infrastructure is already in place,” Chapman said. As restaurants begin to reopen, most owners and staff have had nothing but time to further educate themselves on these efforts. And some are taking even more time to prepare, even when their neighbors welcomed patrons on Friday.

“We have six tables inside and a small patio,” says Jack Brown’s general manager, Ray Forthruber. “The whole concept of Jack Brown’s is this small, intimate setting – it puts us in an interesting situation.” 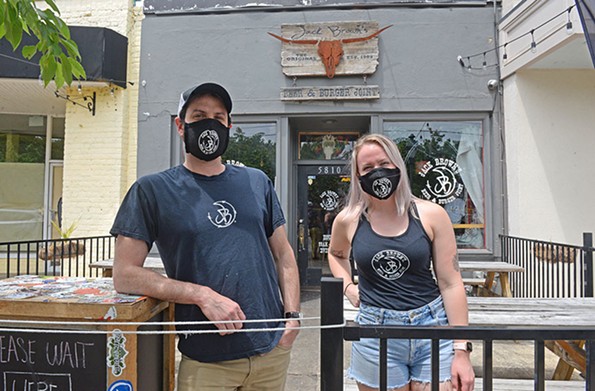 Its burgers and tots have been selling like hotcakes during the pandemic, which means it can continue with to-go and delivery only while continuing to suspend dine-in service. Forthruber says it’s lucky, in this regard, to be able to “stay afloat” with the current model. For the next week, give or take, Jack Brown’s employees will stain outdoor tables so they’re easier to wash, and the back of house will be retrained through the ServSafe program, available online for free through May 31. “It’s a good time to go back to the basics,” Forthruber says.

It plans to reopen – even if it means only two picnic tables to start – to muddle through the confusion with masked smiles and creative measures alongside the rest of the city.

It may not feel like dining out, at first, Bayer says. Saison and Bingo Beer patrons will be confronted with the bright orange signs and the sanitation stations. But he hopes that after a few minutes, guests will feel safe, comfortable and able to revel in the joy of dining out.

“The important part for us is showing that with everything we’re doing, you can let your guard down.”