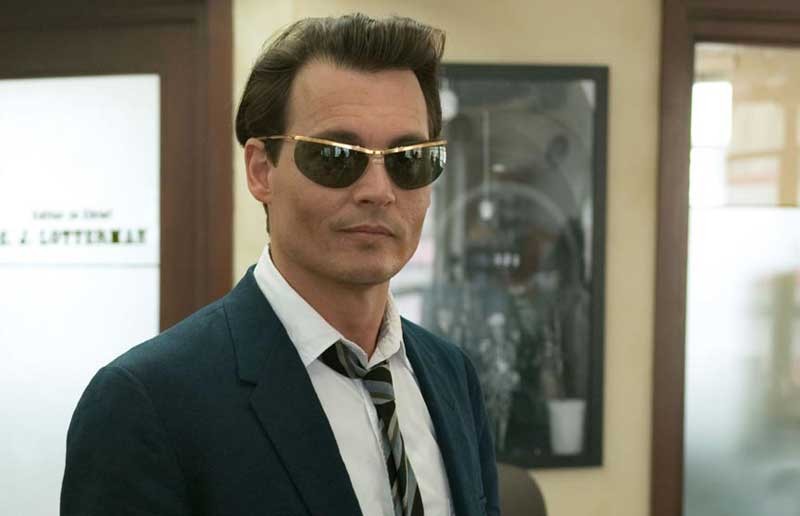 The latest Hunter S. Thompson-inspired movie begins where the last one left off: with Johnny Depp. The drugs haven't kicked in yet, but from what we can see the booze is already a long-time resident. It's the 1960s and Thompson, thinly-veiled in the novel "The Rum Diary" and this film adaptation as journalist Paul Kemp (Depp), is still trying to find himself when he lands a job at The San Juan Star, a small newspaper in Puerto Rico.

At this point, Raoul Duke, Duke Raoul and Dr. Gonzo are just a gleam in his bloodshot eyes. "I'm still trying to figure out how to write like me," he tells Chenault (Amber Heard), the beautiful blonde girlfriend of an oily real-estate developer named Sanderson (Aaron Eckhart) who wants to hire Kemp to fill various newspapers and magazines with puff pieces that will help his interests despoil the virgin Puerto Rican soil with more resorts.

Sanderson helps Kemp figure out how to write like me (like himself, that is) in ways he probably did not intend, helping the gimlet-eyed writer find his journalistic mission by introducing him to the (mostly) legal pillaging of the island's resources. As a story about corruption, it's worth several documentaries on financial derivatives.

Unfortunately this is also a movie about exotic locations, beautiful people and the attempt to blend it all together with antics similar to Terry Gilliam's "Fear and Loathing in Las Vegas." "Diary" comes off at times more like "Fear and Loathing" meets "The Tourist." Alternately we get a screwball adventure story about a reporter lost in a weird part of the world; a romantic comedy set on an island getaway; more bleary-eyed comedy about alcohol abuse; and a small but potent saga of muckraking journalism. That last element is what you should buy the ticket for, but the rest turns out to be an overly strong cocktail that occasionally sends the movie on a bender of its own. Through it all, however, Thompson's unique, vivid prose punches through even the most impaired scenes.

The narrative thread concerns Kemp's dealings with the unctuous Sanderson, which sends Kemp to various island locales, where Sanderson's bodacious girlfriend always happens to be, usually dressed in very little. "Rum Diary" is reminiscent of one of those 1930s Astaire-Rogers musicals, where the plot is just superficial filler between dance numbers. Except instead of Fred and Ginger tapping on studio flooring you get Kemp tapping away on his typewriter. Kemp's version might not be quite as thrilling, but it definitely has its moments.

In one scene Kemp and his photographer buddy Sala (a perfectly sweaty, dingy Michael Rispoli) drop too much acid ("Your tongue is like an accusatory giblet!") and walk the streets of San Juan to cool off, where Kemp communes with lobsters awaiting their fates in a tank. "You humans," he reads from their eye-stalks, "are the only creatures who claim to have a god, and the only ones who behave as if there isn't one."

Kemp, whom we fear is being seduced by Sanderson, is reborn. "There is no dream," he types later that night, recalling a conversation with his jaded editor (Richard Jenkins) about how news merely reinforces people's illusions. "There's just a piss puddle of greed spreading throughout the world." He recalls a quotation from Wilde about cynics: "They know the price of everything and the value of nothing."

We do not always bask in these great lines, urging us to propose about contemporary filmmakers: They know the value of everything, but restraint for nothing.

"The Rum Diary" was Thompson's first book, but he didn't publish it until the late 1990s. The adaptation was directed by Bruce Robinson, perhaps best known for directing the cult classic "Withnail and I." "The Rum Diaries" is a far cry from that masterpiece of non sequitur. "Diary" too often feels irregular in a bad way. Johnny Depp, for example, if not too old, looks too weary and noncommittal to render a keen young Thompson on the cusp of his breakthrough.

"The Rum Diary" compensates with capers like voodoo curses and cockfighting tournaments in an effort to find a Hollywood ending that (thankfully) wasn't found. Hunter Thompson books sometimes ramble on like this gloriously, but better adaptations wisely pick and choose what to focus on and what to leave as background color. (R) 120 min. S