The uke gets the hands-on treatment at the Richmond Folk Festival. 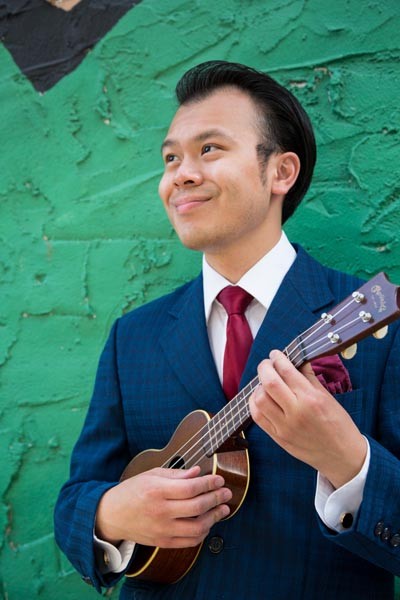 The room is alive with the sound of nylon strings.

Richmond musician Samson Trinh stands before a full class at In Your Ear studio, raising his small ukulele to the room. "For the F-chord, make the peace sign again!" he says, bouncing between chairs to help a pair of young boys form the barre chord with their tiny fingers, then scooting through the packed studio to assist the adults in the room.

They've all come for beginner lessons at Trinh's Ukulele Petting Zoo, and the sound they make is a glorious, slightly out-of-tune racket — not dissonant, thanks to the soft strings, but more like some glowing insect orchestra. Within minutes, they're pretty much nailing the Beatles classic "Eight Days a Week" in unison.

"People are amazed at how easy ukuleles are to play," Trinh says. "It's the only instrument that when you play it for the first time, you think, 'Wow, you can do so much with four simple strings.'"

Trinh, a seasoned teacher, composer and saxophonist with his Upper East Side Big Band, which turns 10 this year, first got into ukuleles because of his smallish hands. Soon friends introduced him to the River City Ukulele Society, which meets on Tuesdays to jam in Glen Allen. Seeing the potential, Trinh started teaching his students at Glen Allen Elementary School, and estimates that he's taught more than 700 kids.

It's a musical trend that appears to be growing. First, there was the platinum-selling ukulele medley of "Somewhere Over the Rainbow" by Israel Kamakawiwo'ole, and then artists as wide-ranging as Eddie Vedder, Beruit and Arcade Fire were recording with them. South by Southwest featured a Beatles ukulele symposium, and ukulele sales have exploded in Brooklyn in recent years, as noted in a Huffington Post article.

"It's our bread and butter, outsells guitars 10 to one," says John Gonzalez del Solar, who runs Fan Guitar and Ukulele with his wife, Genie. They moved here from Hawaii a year ago to be near family. The idea for a store came from witnessing the brisk sale of ukuleles to the continental United States at his former employer, he says. "They're inexpensive and easy to play ... but can be as complex as you want."

You can catch Trinh and his students in action at the Folk Festival's Genworth Financial Family Stage, where he'll feature his Uke 'n' Roll class from "Live Art" at the School of the Performing Arts in the Richmond Community. After the performance, feel free to join in on the jam — bring your own uke. Or, there will be plenty to choose from at the event, Trinh says. And if you need help tuning, there are free apps for that.

Samson Trinh will conduct a Uke 'n' Roll workshop and jam session Sunday, Oct. 13, at the Genworth Financial Family Stage from 1-1:45 p.m. Also coming up is UkeFest VA on Nov. 1 and 2 at the Center for the Arts at Glen Allen. For information, visit samsontrinh.com and fanguitarandukulele.com.