Peter Jackson’s colorized, richly detailed World War I doc “They Shall Not Grow Old” will leave you gasping 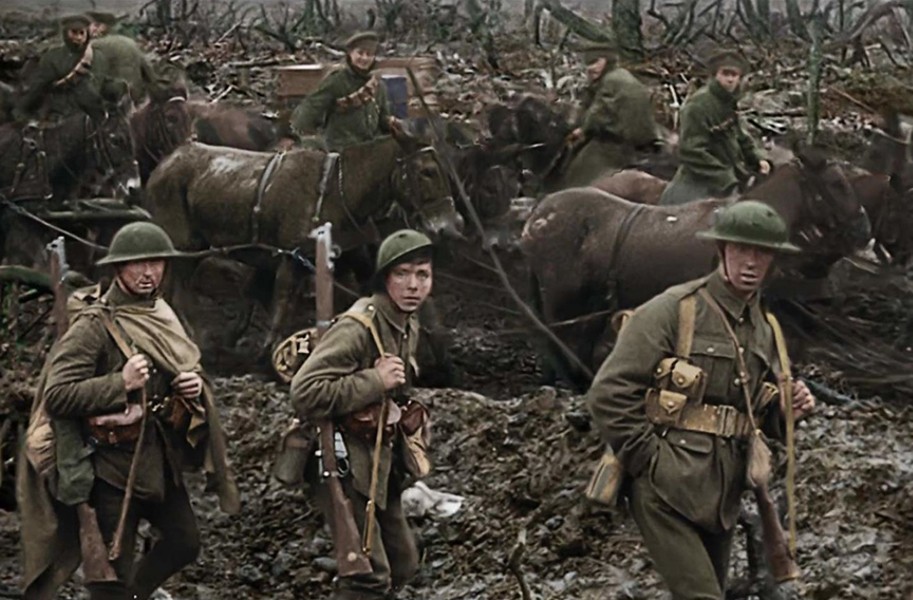 The documentary "They Shall Not Grow Old" glosses over its subject in a brisk hour and 30-odd minutes, but wow, what a gloss.

Commissioned to celebrate the 100th anniversary of the World War I armistice of Nov. 11, 1918, the film presents archival British footage, digitally restored and remade into a 3-D color film with sound. The result is often amazing, sometimes astounding.

Britain's WWI centenary arts program, 14-18 Now, approached Jackson four years ago to gauge his interest helping it with a documentary celebrating. It just wanted someone to use the miles of archival footage they had and do so in a unique way.

In a short introduction to the film that ran during its limited engagement in December, Jackson recalls wondering how to achieve those stipulations. The challenge exhilarated the director, whose grandfather served in the war, but also left him scratching his head. What could he do with old silent footage that hadn't been done before?

After some consideration, Jackson returned with an idea that smashed box office records during its December two-day engagement, and inspired Warner Bros. to buy distribution rights and release the film nationally. Another special engagement is scheduled for Jan. 21; then the film will roll out across the country through February.

Jackson decided to try going beyond mere restoration, to take the footage and make it look like it was shot as recently as possible. Using the latest digital software, and software designed specifically for the project, he added color and sound, and created a 3-D conversion print available in some screenings.

The film's trailer, which shows some of the footage before and after restoration, demonstrates snippets of the impressive results. But seeing it on a big screen, in 3-D, is something else, often inspiring gasps from the audience.

There's usually a barrier inherent in such footage that makes it difficult for an audience to connect: that lack of sound, the flat, scratchiness of the worn-out images and the difficulty in discerning detail. It all often combines to create the impression more of moving still photography than real film footage we are used to seeing today.

Jackson's restoration reveals the detail in the moving pictures. Smoke wafts among soldiers sitting together in a field as the camera passes among them. Horses struggling to move artillery through deep mud heave plumes of frosted breath into the air. Flies buzz around corpses lying in heaps as luckier comrades pass by.

Jackson had more tricks up his sleeve. The film is narrated, "Band of Brothers"-style, by soldiers who served in the war, from recordings made in the 1960s. One of Jackson's most clever ideas, however, and one I wish the film had employed more, was to hire professional lip readers to figure out what people in the footage are saying. Jackson and his team then hired voice actors to re-create the voices.

Hearing soldiers from a century ago talk to each other on film made me wonder if anyone had ever thought of doing this before. It really is amazing to hear when combined with added sound effects and the voiceover provided by the veterans.

There is one caveat here amid all the technical wizardry and spectacle. "They Shall Not Grow Old" has no point of view, save the memories of those who served. Its survey of the war is basic: Nations went to war, war was hell and it eventually ended.

Aside from the brief run time, however, it feels like war from the soldiers' perspective. For them, the way the doc tells it, war meant shifting personal feelings: the initial thrill of signing up, the tedious drilling and marching that followed, boredom and fear in filthy trenches, shells flying overhead, the insane terror of attacking the enemy, the sudden end to it all and the complete indifference of their countrymen and women who threw parades at the start.

Some could argue that "They Shall Not Grow Old" is nothing more than a particularly fancy museum exhibition. But even so, it may be the greatest exhibition on WWI ever made.

There's something fascinating about the life of a soldier, which is probably why war stories and war documentaries are often so popular. "They Shall Not Grow Old" seems to sense this and strictly adheres to the narrative provided by the soldiers, which is scant on the war's bigger picture but very rich in its details. (R) 107 min.