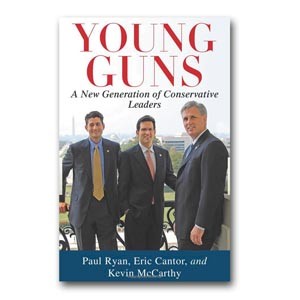 “There is a better way and a new team is ready to bring America back,” the narrator booms while three congressmen, wearing silly grins along with slacks and dress shirts, stride purposefully toward the camera. “These are the Young Guns!”

It might have been a “Saturday Night Live” skit. But it is, in fact, a Web-streamed ad for a new book by three very ambitious Republican congressmen: Kevin McCarthy of California, Paul Ryan of Wisconsin and Eric Cantor, the House minority whip and party wunderkind from Henrico County.

Ryan is the wonk who touts his “road map” for America's future while McCarthy tackles strategy. Cantor is the “leader” who acknowledges that Republicans fell short on principles in the past and can do much better.

Also jarring is how Cantor and his colleagues try to tap tea-party populism that's shaken up both the Republican and Democratic establishments. Cantor, who represents Virginia's 7th Congressional District, which stretches from western Richmond to the Blue Ridge Mountains, is about as radical as a bowl of Virginia spoon bread.

He's a solid Main Street Republican, with a record that cares more about the monied classes of greater Richmond than the poor. He's an accomplished fundraiser and talks the usual GOP game about cutting budgets — until it hits home.

He's been a strong backer of federal spending for higher-speed rail so Richmond's pooh-bahs can get to Washington for meetings without the hassle of Interstate 95. And he's backed spending for a jet engine for the new F-35 fighter that the Pentagon doesn't want. This is because Rolls-Royce, which would help make the engines, has its regional headquarters and is building a big manufacturing plant in Virginia.

The trio also seems to have no problem with stretching the definition of young. Cantor is 47 and McCarthy is 44. Ryan is about to turn 40.