The James River Park System battles to protect ash trees from a beetle that kills most of the wood it infests. 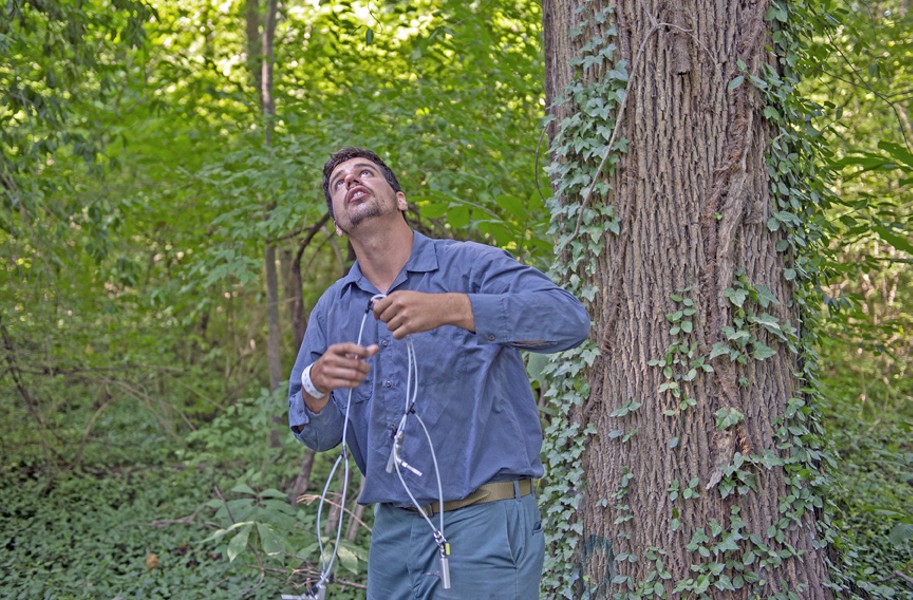 Ash Daniel Wilson Shealy, a tree technician with the Davey Tree Expert Co., works inside the James River Park System, which has about 20 trees being treated for the dangerous emerald ash borer beetle from Asia.

“It’s like giving a shot to a tree,” says Bryce Wilk, James River Parks System superintendent, about the process of protecting ash trees in the park from a lethal beetle.

The emerald ash borer is an invasive beetle from Asia. Its larvae harmfully burrow into the trunks of ash trees native to the United States – killing 95% of the trees they infest. After signs of the pest were spotted in the western part of the system, exterminators contacted by parks officials got to work preventatively treating ash trees last week.

The beetle attacks the trees by stopping transportation of water and nutrients from the ground to the canopy. During treatment, insecticide is injected through metal tubes in holes drilled at the trunk base, and saturates the same pathways responsible for water and nutrient distribution throughout the tree.

Found in 35 states, the beetle is particularly troublesome in the state's Shenandoah Valley. It's believed to have arrived in the U.S. in the 1990s on shipments of solid-wood package material and has been spotted in Richmond and throughout Central Virginia.

Preventative measures in the park focused on healthy ash trees and those showing minimal evidence of damage. Once more than 30% of a tree's canopy is lost, it's already too late, Wilk says.

"That's less than half dead and we can't save that tree," he says. "So, we are identifying trees with a much lower percentage than that. … We're selecting the healthiest."

On city lands outside of the JRPS, the existence of 1,165 ash trees has been recorded by the Urban Forestry Division, which is now conducting Emerald Ash Borer damage inspections. Arborists estimate a high percentage of these trees are infested and that doesn't include trees on private property. The beetle also has blighted trees in Pocahontas State Park, where 88 have been treated since last year.

In the James River parks, a lack of manpower and resources make it difficult to fully survey which trees are marred by the D-shaped holes created by larvae boring past the diamond-patterned outer bark characteristic of the ash, Wilk says. That's compounded by the fact that the holes are often difficult to spot from the ground. A lightening of the bark and galleries — winding grooves under the trunk surface created by larvae — are also evidence of infestation.

Roughly 20 trees within the JRPS are being treated in the Huguenot Flatwater area and the Wetlands, with half of roughly $3,500 in costs covered by the JRPS and a matching grant from the Virginia Department of Forestry. After the initial round of pesticide, all trees need to be retreated every two years and the grant renews annually to help awardees with subsequent work. Municipalities and private property owners can also apply and residents can prevent the spread of the ash borer by only burning firewood indigenous to an area.

Proactively treating ash trees is less expensive than removing them after death, says Molly O'Liddy, a state forester. Arborists climb live trees to remove them in sections but because standing dead trees are brittle, they are often unsafe to climb. Instead, the dead trees often must be removed by crane, which drives up costs.

"They provide habitat and structures for our banks [and] erosion prevention," O'Liddy says. "They like to grow on the side of river banks and they provide shade, which in turn cools the water and makes it more of a beneficial habitat for species like fish."

O'Liddy also notes that the ash tree has long had a strong visual presence throughout Richmond.

"There are iconic [ash trees] in Byrd Park and also Forest Hill Park that have been there for the better half of the century," she says. "We don't have as many ash trees as some other cities across the state. … But we still have these trees in historic areas and we want to keep them there."