A small Richmond family company preserves the patterns of the past for history — and Hollywood. 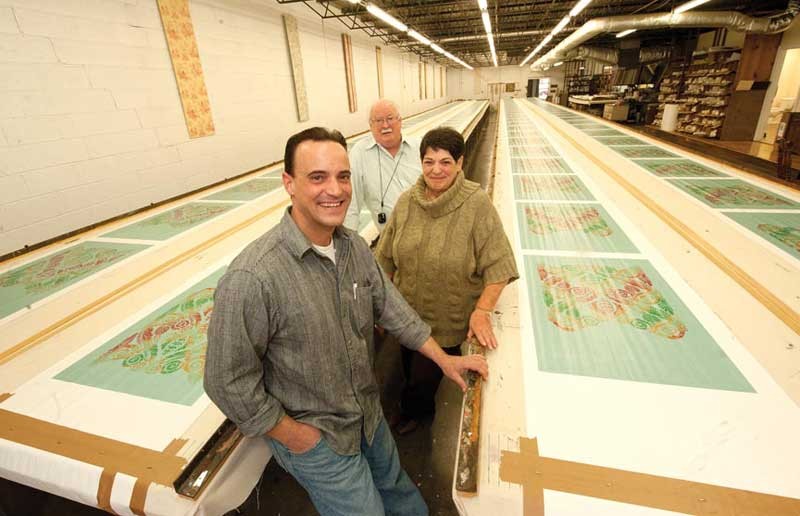 To choose wallpaper as your life's work, you must obsess.

You must love symmetry and history. You must understand the mathematics of damask. You must be a little bit Sherlock Holmes and a little bit Martha Stewart.

In short, you must be Paul Carter. He can do something virtually no one else can do: re-create historic patterns from tiny, tattered scraps, using only hand and eye.

His father, Robert Carter, a former architect with a degree in graphic arts, founded Carter & Co. Historic Wallpapers in 1990 to fill a particular niche: re-printing original papers for old homes. In April 2010, the Carters moved the business from San Francisco to a modest building in Scott's Addition.

Paul Carter, 36, took the reins in December after his father's health problems led him to retire. He began learning the trade when he was 13, and does most of the company's pattern development.

The first step is creating a master drawing on translucent, grid-lined Mylar film. Sometimes Carter works from a black-and-white photograph. Sometimes all he has is a client's blurred memory of the wall in his grandfather's dining room. He fills in the gaps with his knowledge of patterns from other papers of the period.

Software would make quick work of the task. But computer-generated wallpaper has no soul. "It might look beautiful," Carter says. "But it looks flat."

Once Carter has worked out the full, repeating pattern, he must separate the individual color layers. He carefully wields an X-Acto knife to hand cut each layer from a sheet of plastic film. The film overlay is placed on a screen that's coated with a light-sensitive emulsion. In a darkroom it's exposed, like a photograph, to create permanently patterned screens.

Then: the colors. Thomas Condon, an art instructor at the University of Richmond, mixes pigments to create a custom palette for each wallpaper pattern. Condon recently experimented with 90 variations before settling on a metallic spruce green — and that was just for the company's 2011 Christmas card.

Why not use that nifty color-matching machine they have in the paint department at Lowe's? Reading the color from old paper "would give you a dirty color," Condon says. He matches the colors not as they are, faded by light and age, but as they were when they were new.

Color and pattern come together when production manager Ryan Bechard uses a squeegee to smooth paint over the screen, printing each layer in turn on a long roll of cotton rag paper.

"Tedious is a great word to use to describe this work," Carter says. Yet the long process of drawing, cutting, coloring and printing creates wallpaper that, with its texture and slight imperfections, is more authentic than any machine-printed product.

In August, Steven Spielberg's set designers approached Carter to purchase some historic patterns, as well as commission one very special design. They showed him a photograph of Abraham Lincoln that included a tiny patch of wallpaper.

Carter worked 12 hours a day, seven days a week for three months straight to produce the paper the film crew needed. The process was documented for the "making of" feature that likely will appear on the movie's DVD.

In 21 years, the company has faithfully re-created more than 340 patterns from the 1830s through the 1940s. After developing the pattern for a client, in most cases Carter & Co. makes it available to the public. You can have Frederick Douglass' pale green ferns. Or you can have the brown and cobalt twinings that Abraham Lincoln stared at while he drifted off to sleep. (You can't, however, have the Lincoln wallpaper that Spielberg commissioned.) The price for one roll of 30 square feet starts at around $100.

No one matches the Carters' quality and depth of research on historic wallpaper, says Cathy Wright, curator for the Museum of the Confederacy. Museum staff consulted the company when choosing historically appropriate borders for two upstairs rooms in the White House of the Confederacy. When you're trying to achieve an authentic look, Wright says, "You want your paper to not look like it came out of Wal-Mart."

Wallpaper possesses the power to transport you to a particular time and place, Carter says. "It's not just a piece of paper with color on it," he says. "It's a piece of history."

For two years he's labored to re-create a set of 20 panels, each 6 feet high, which depict an 1830s French artist's vision of the Amazon jungle. In that time he's completed two panels. Carter expects to be working on the project for the rest of his life.

Yet in Carter's house, the walls are white. He likes them that way. S