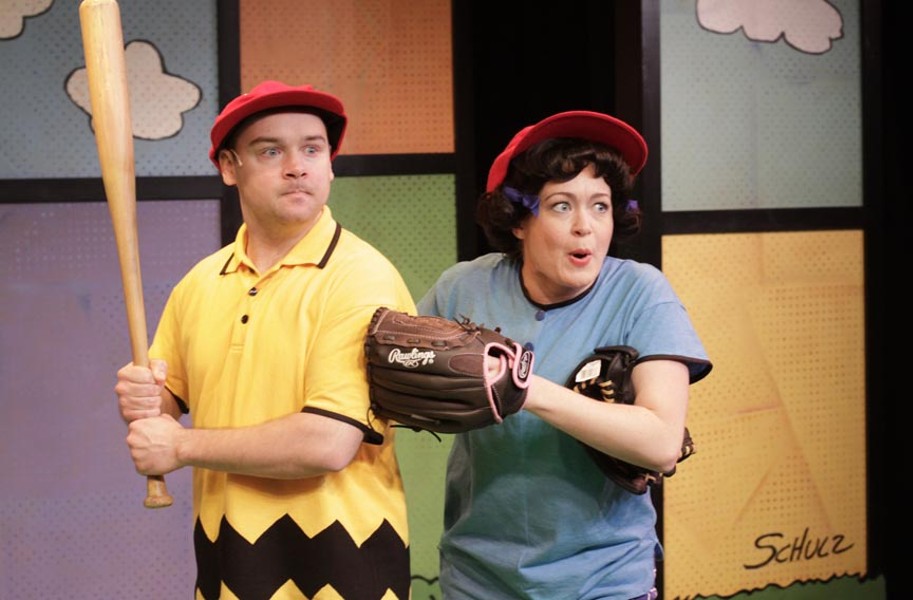 Some shows naturally facilitate rampant scenery chewing, with a mix of characters and situations that allow, even encourage, performers to go to delightful actorly extremes. A prime example is “You’re a Good Man, Charlie Brown.” The peppy, episodic musical provides an opportunity for whoever plays Snoopy to cut loose and, in his or her portrayal of the free-spirited beagle, actually physically chew the scenery if so inspired.

But for the production enlivening Virginia Repertory Theatre’s Hanover Tavern stage, director Susan Sanford has allowed the spotlight to stray beyond Snoopy to allow each of Charles Schulz’s iconic characters a vibrant existence all his or her own. Sure, Jeff Sundheim playfully mugs up a storm as Snoopy, particularly during his gleeful anthem, “Suppertime.” But I can’t recall a previous iteration of this musical getting so much mileage out of Schroeder’s advocacy for a holiday to honor Beethoven, thanks to Durron Marquis Tyre’s portrayal of the pianist and the full-throated passion he exerts during the song “Beethoven Day.”

Charlie’s little sister, Sally, also tends to get lost in the background, but that’s not an option here with Catherine Walker bolstering her spot-on comic timing with a powerful singing voice that makes her delivery of “My New Philosophy” a second-act standout.

Of course, the heart of this show is Charlie Brown, and it’s difficult to imagine someone better suited to the role than David Janeski. With a soft, lilting voice and a unassuming manner, the actor runs through a litany of embarrassments that legions of fans of the “Peanuts” comics will find all-too-familiar: His kite crashes, his baseball team collapses and he pines in vain for the Little Red-Haired Girl. There’s no real plot, but the series of vignettes reveal that his dogged determination to persevere does indeed make Charlie a good man.

Charlie’s principal foils are the brother-sister pair of Linus (Brent Gallahan) and Lucy Van Pelt (Aly Wepplo, Janeski’s real-life wife). Just as Janeski makes Charlie the loser you end up loving, Wepplo creates a bully you can’t manage to hate. Gallahan makes his strongest impression in “My Blanket and Me,” showcasing some of the show’s imaginative choreography, also by Sanford.

The director consistently gets the details right. One great sidelight is the way members of the onstage three-piece band, skillfully led by music director Sandy Dacus, add accessories to their outfits that reflect the action in different scenes, from baseball caps to bright red scarves. The costumes, designed by Ruth Hedberg, capture the signature looks you expect for the “Peanuts” gang, and the set design by Terrie Powers, made of appropriately primary-colored panels, evokes the comics nicely. Lighting designer B. J. Wilkinson adds flourishes to bolster bits such as Snoopy’s battle with the Red Baron.

Evaluated alone, this is an excellent, finely crafted production, but it’s also interesting to consider in the context of its entrance in the Acts of Faith Festival. This may seem odd until you consider the deeper themes at which the show hints involving philosophy and free will. Though done with great humor, there’s an angsty, existential backbone to this fun, frolicsome musical. S

“You’re a Good Man, Charlie Brown” plays through April 17 at the Historic Hanover Tavern. Tickets and information are available at va-rep.org or by calling 282-2620.