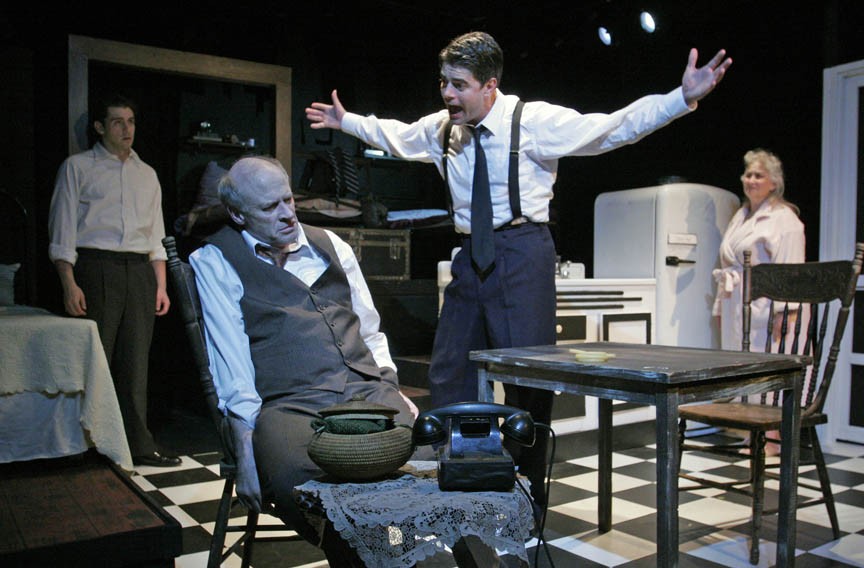 Few roles are as frustrating to watch as Willy Loman, the protagonist of Arthur Miller's "Death of a Salesman." Stubborn and prideful, the traveling salesman clings to his dreams of greatness even when they turn toxic.

At 63, Willy is so battered by life he can't keep his eyes on the road anymore and recently was demoted by the company where he worked for decades. When Willy's sons, Biff and Happy, return home, their presence exacerbates Willy's disassociation with reality and desire to kill himself. His relationship with Biff is especially fraught, because the 34-year-old still lives a drifter's existence, a far cry from the greatness Willy expected of him.

As Willy, Joe Inscoe's portrayal shows the mileage of a salesman beaten down by a lifetime of dreams unfulfilled. Inscoe effortlessly channels his character's frustrations and inflexibility, creating a multifaceted rendering that's at turns enraged and pitiable. Slumped over and wielding a Brooklyn accent, Inscoe seems to wear the weight of the world on his shoulders.

Personifying Willy's dreams and aspirations is Adrian Rieder's Biff, a former high-school football star turned ranch hand. Rieder is every bit the fallen hero, jaded and still searching for both himself and his father's love. Gordon Bass is excellent as Charley, the successful next-door neighbor who tries to help Willy. Bass' performance accounts for much of the show's humor, and he deftly handles Miller's somewhat clunky monologue in the play's final scene.

Phil Hayes' set fits the bill for the show, but certain elements, such as the silhouette of a car, seem out of place. Given that the characters must continually walk through walls, sets for "Salesman" usually are more functional than they are attractive, and this set is no different. Holly Sullivan's costumes highlight the character's qualities, such as Willy's oversized shirt on his sagging frame or Biff's tighter threads to emphasize his physical strength. Rusty Wilson's fluid direction never loses the audience as it jumps from reality to the inner workings of Willy's mind.

Depressing and powerful, Miller's exploration of the American dream is presented in all its dark glory at the Firehouse Theatre. S