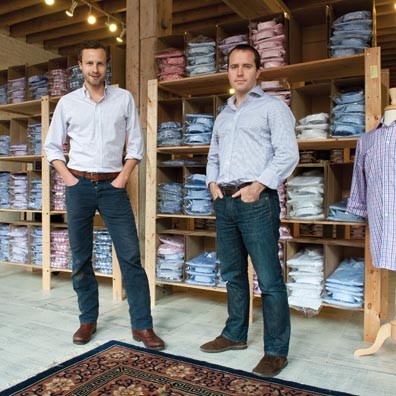 Lehman Brothers collapsed, and the financial markets were in disarray. This wasn’t good news for Paul Trible and Paul Watson, who’d just graduated from the University of Oxford in England — both with masters’ degrees in business — in September 2008.

“We were sort of looking at each other, saying, ‘What’s next?’” Watson recalls. The Pauls, who became friends at Oxford, really liked the shirts on Jermyn Street in London, particularly those by the Australian tailor Robert Emmett. Back home — Watson is from New Orleans and Trible from Newport News — well-made shirts at a reasonable price were impossible to find. They figured, Why not start a shirt-making business?

So Trible asked Emmett if he’d teach him. After nine months in the shop, Trible and Watson launched Ledbury in December 2009. At the height of the recession, they found a market for high-end shirts at a midmarket price. Mostly an online business, the shirts sell for between $115 and $165.

This year they expect to sell more than 10,000 shirts. They’ve been featured in GQ and The Wall Street Journal. They got airtime on CNN. Earlier this year, MSNBC’s Joe Scarborough talked up Ledbury on “Morning Joe.”

Their shirts are made in Europe (fabrics are from Italy; shirts are stitched in Poland) and feature classic, understated designs. Best of all, Watson and Trible decided to locate their small shop in Shockoe Slip, giving Richmond a dose of brand identity that’s something other than advertising or tobacco.

“We are very much a Richmond-based brand, and we want to be,” Trible says.

When they’re not dreaming up the latest patterns between jaunts to Paris, Watson coaches a soccer team of homeless people through Richmond Street Soccer, and Trible is on the associates’ board of Richmond CenterStage.