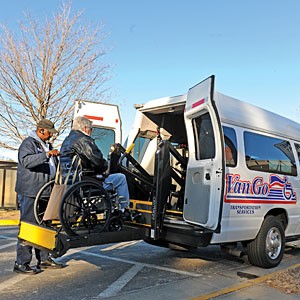 Navigating the first snowfall of winter, Jerry Wright travels the icy streets of Church Hill at a crawl behind the wheel of a several-ton transport van.

“This is a lot of steel going down the road,” he says, while operating the van's hydraulic lift to usher one of his two wheelchair-bound clients out of the mid-December snow and into the warm van.

Wright's experience driving heavy loads in icy weather conditions dates to his Army days at Fort Richardson in Anchorage, Alaska. But for the last three years he's driven for Van Go Transportation Services, one of a handful of local companies that give rides to and from medical appointments to Richmonders without the means. For those people whose medical conditions don't defer to weather patterns, such as dialysis patients, services such as Van Go's are essential.

“You can't cancel dialysis,” manager Steve Rich says. In inclement weather, many of the company's appointments come by way of kidney dialysis patients who may require treatment as many as four times per week.

Martha Taylor is one of a trio of regulars. Wright picks her up from Virginia Commonwealth University's Kidney Dialysis Center in Mechanicsville on Dec. 16. As the van heads toward Creighton Court, Taylor's fellow passengers drift off to sleep. Soft-spoken and snuggled under a parka, Taylor has been using the service for 11 years, she says. As a double amputee, driving herself to and from the center for dialysis treatment three times a week isn't an option. “I wouldn't be able to my appointments without them,” she says of Van Go.

Owner Sid del Cardayre purchased Van Go in 1990, when the fleet was six vans strong. Today, the company has about 65 vans that shuttle as many as 1,200 people a day, Rich says. For quality of service, the company was recently named operator of the year by the Taxicab, Limousine and Paratransit Association.

There are 240 wheelchair transport services in Virginia, according to the state's Department of Medical Assistance Services. It's an expensive business to get into, Rich says. Each truck costs an estimated $40,000 to outfit for wheelchair transport.

Medicaid foots the bill for many of Van Go's clients, though there are a handful of customers who pay out of pocket. Round trips within a 10-mile radius cost between $55 and $65 for wheelchair-bound clients, Rich says. Van Go also has contracts with Henrico County and the Hunter Holmes McGuire Veterans Affairs Medical Center in South Richmond.

The Wards pay for their ride home from the Veterans Affairs hospital with vouchers, part of a program set up to provide inexpensive transportation for the elderly and disabled in a county famously missing much public transportation.

When the van comes to a stop in front of their small apartment located off Midlothian Turnpike, Juanita hands Wright a purple ticket, and she and her new husband nudge over to the lift. They have another hospital appointment the next morning, she says. They've scheduled a ride with Van Go for 5 a.m.