Path of Resistance: Exploring the Sense, Significance and Future of the Richmond Slave Trail 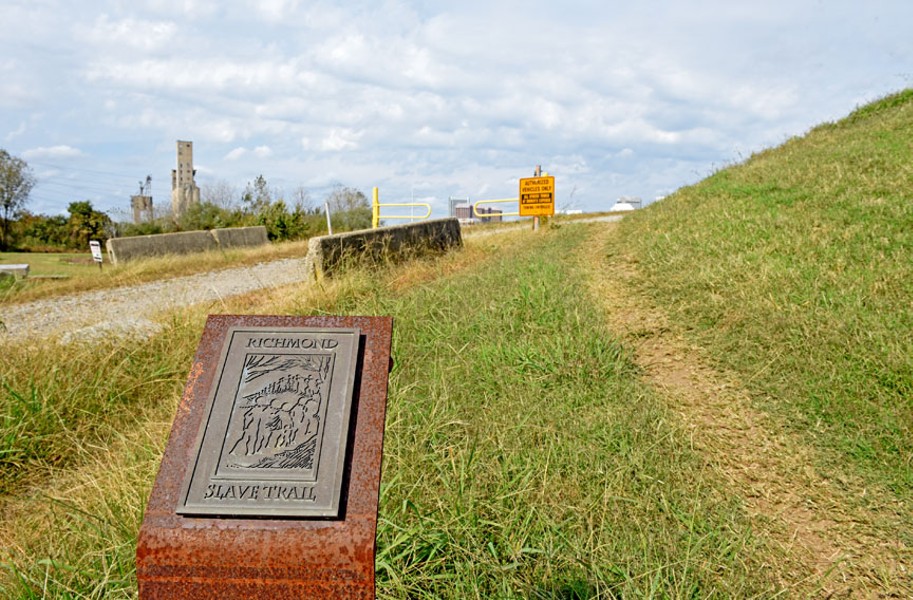 When I moved to Richmond in December 2014, I chose the Shockoe Bottom neighborhood because I liked the old factories converted into living spaces.

Out on a walk, I wandered into a large field that looked like the green on a golf course, visible from Interstate 95. I wondered why I never saw anyone playing Frisbee or soccer on it.

The grass was short. The plot is off Broad Street, a thoroughfare that runs by Richmond City Hall, the Executive Mansion and the State Capitol a few blocks up a hill.

Trash and bottles were scattered near the plot’s entrance. I walked across the grass toward a marker: “Richmond’s African Burial Ground.”

It was there, listening to the hum of highway traffic, that I realized I was standing on a place where slaves had been executed. One in particular who is honored is Gabriel, a blacksmith who organized a slave rebellion in 1800 that included a plan to kidnap the governor.

The burial ground is part of what’s called the Richmond Slave Trail. The trail is meant to be walked, so I later did, and here’s what I found. 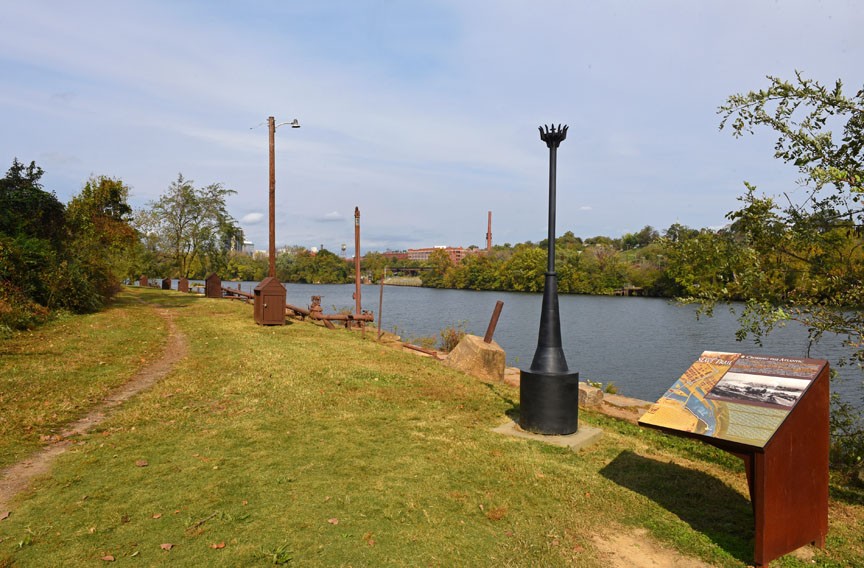 It starts at Manchester Docks near a wastewater treatment plant. The trail is marked by engravings that show chained slaves being led along a roadway. A few people are fishing on the James River the day I arrive, while families of geese roam the park.

Across the James River is the edge of Tobacco Row — a stretch of nice loft apartments built out of former tobacco factories that are mostly occupied by white professional types. The new Stone Brewing complex, built and owned by the Richmond Economic Development Authority, is nearby.

A rebel soldier monument guards Libby Hill Park from his tower, lighted always at night and visible from a distance. During the Civil War his city’s defenses were fortified by thousands of slaves.

This area was a significant market in the slave trade, which displaced about 10 million Africans from their homes. A photo on one trail sign shows the same spot as it was in 1865, and the text explains the journey across the Atlantic of enslaved Africans and how they came to work on Virginia’s tobacco plantations.

A drawing of a vessel shows human beings “packed up and wedged together as tight as they could cram.”

The trail, early on, becomes a wooded nature walk. Two turtles jump off a log into the river when I stop to look. A marker explains the Creole revolt of 1841, when Madison Washington tried to organize an uprising of slaves aboard a vessel after it left Hampton Roads.

By 1840, Richmond had become the most active exporter of slaves to Deep South plantations, I read, after coming out of the woods and looking across the James River toward downtown.

A walk along a flood wall lasts about 20 minutes, and then the trail crosses the Mayo Bridge to downtown on a sidewalk next to fast-moving cars and trucks and a recycling business. The first toll bridge was built there about 1788. Africans, fastened together, were made to walk across it.

The trail crosses the river and Kanawha Canal near downtown and Shockoe Bottom. Outside a Buffalo Wild Wings is a marker titled “Auction Houses.”

It explains how white Richmonders reacted to slave sales, which generally was to pretend that nothing was happening. Portions of one slave auction house remain.

At 15th and Main streets, a sign reads: “You are standing in the geographical heart of the slave trading district.” Looking around, I find myself at a busy intersection with a parking lot on one corner, a highway overpass on another, a strip club on the third and a statue on the fourth.

Here is the Reconciliation Statue, unveiled in 2007 after the Virginia General Assembly voted to express profound regret for the state’s role in the slave trade. It memorializes the British, African and American triangular trade route. 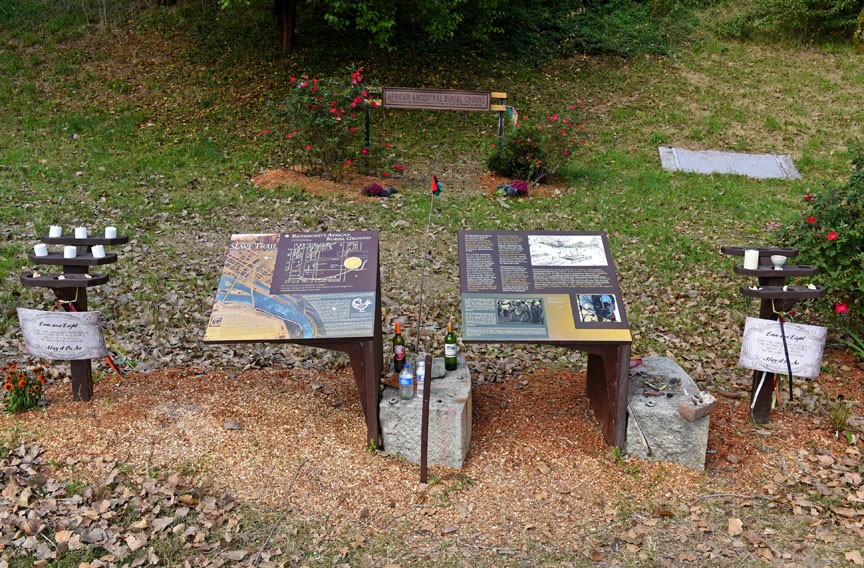 I continue to the Lumpkin’s Jail site, which was called the Devil’s Half Acre.” Slaves were punished here and held for sale. This site is surrounded by a parking lot. No other hikers or tourists are on the trail this day. I have it to myself.

After walking through the parking lot I arrive near the place I initially discovered — the burial ground. A sign at an entrance identifies the burial ground and adds, “A place of contemplation and reflection.”

Another sign warns not to use the site for sports and recreation, and it’s identified also as the Old Negro Burial Ground.

I read again about Gabriel’s revolt plan. The burial ground was abandoned in 1816. It was the site of a dog pound in the 1930s. And by the 1970s, it was an asphalt parking lot that eventually came under the ownership of Virginia Commonwealth University. 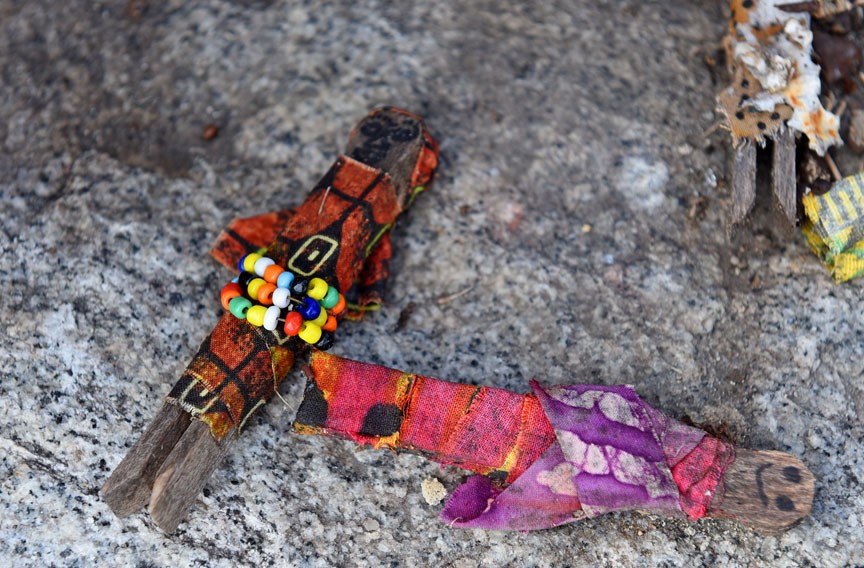 In 2004 a group formed to start interpreting and protecting this sacred area. Ana Edwards, an activist who moved to Richmond from New York in 1988, leads the effort.

At a ceremony in 2011 to begin removing asphalt from the surface of the burial ground, Richmond Mayor Dwight C. Jones, a black pastor, spoke on the site’s historical significance.

“We’re here today to begin beautifying this land that it might become a memorial ... that we might remember the stony road over which we have come,” Jones said, according to The Richmond Times-Dispatch.

But oddly, Jones spent much of his second term working on proposals by developers to build a minor-league baseball stadium in the neighborhood. The community solidly rejected those proposals. Dusty signs from political battles over the stadium still rest in windows in the neighborhood and nearby Church Hill, home to the church where Patrick Henry declared, “Give me liberty or give me death!”

Three weeks ago, there were signs of progress. 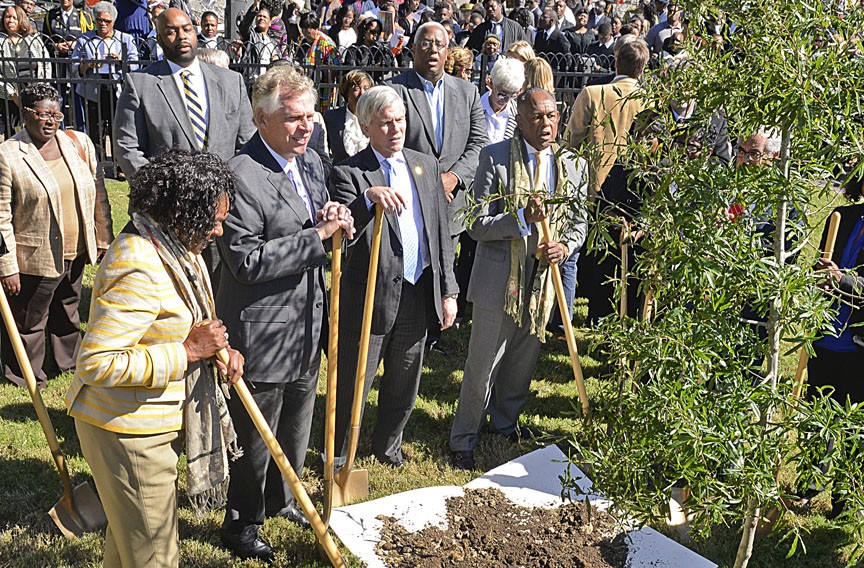 With a few months left as mayor, Jones — flanked by Gov. Terry McAuliffe and former Gov. Bob McDonnell — said the city will move forward with unspecified plans to preserve the site of Lumpkin’s Jail. He announced a $1.4 million city contract with SmithGroupJJR to do work at the site.

Jones, the governors and other state and local officials joined in the Oct. 10 ceremony lasting more than two hours at the jail site that included speeches, music, protesters and a tree-dedication ceremony.

Community members who have spent years pushing for a memorial park in the neighborhood — which would encompass the jail site, an African slave burial ground and other historic areas — said Jones’ plan should be one part of a larger memorial in a city that hasn’t fully accepted its past.

“I’m glad that this event is happening today,” said Lynetta Thompson, president of the Richmond branch of the NAACP. “We definitely would like to see it more expansive. … This area was the epicenter of the slave trade.”

Activist group Defenders for Freedom, Justice & Equality issued a statement saying the mayor’s proposal is a first step but doesn’t protect the historic neighborhood from inappropriate development. The group has secured support for broader preservation from four of the front-runners in the race for mayor. A new mayor will take office in January.

Nathan Beyah, chairman of the criminal and social justice committee of the Richmond NAACP, said the ceremony hosted by Jones’ administration seemed a last-minute way to force an idea on the community.

“If the president can’t name a Supreme Court justice with eight months left, with two months left why would you interject” with a plan “that has been rejected by much of the community already?” 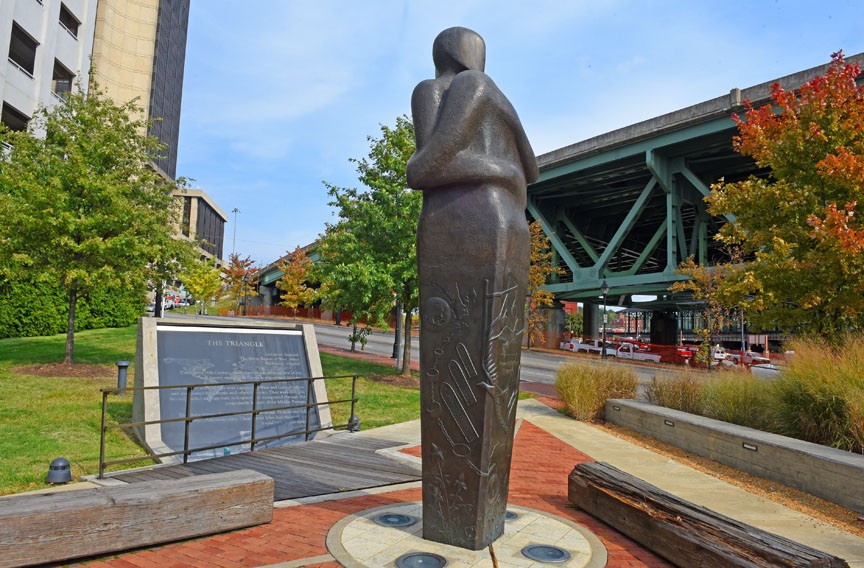 Edwards and community supporters are pushing for a 9-acre memorial park that encompasses numerous historical areas in Shockoe Bottom.

Edwards envisions a memorial park with a water element to pay tribute to Shockoe Creek, which flowed through the area. “It has to be beautiful,” she says, “and it has to tell truthful stories.”

Other developments are underway to commemorate the history of slavery in Richmond. The Black History Museum and Cultural Center of Virginia opened in a new location earlier this year, housed in a building that was an armory for Richmond’s first black militia battalion. On Brown’s Island near downtown, a state commission will construct a 12-foot-tall monument that celebrates the emancipation of slaves.

Even while these things are happening, a website for the slave trail is defunct. The city’s tourism director says that a new website is being developed. 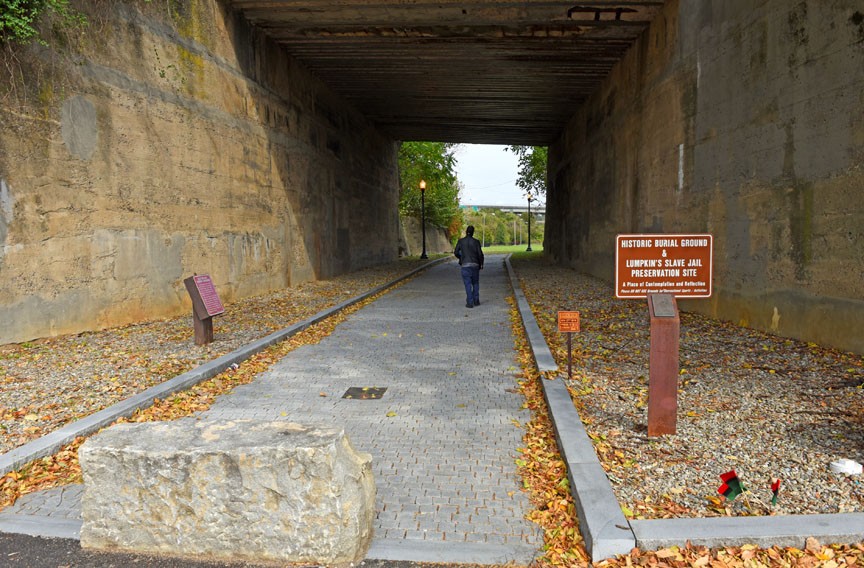 “In Richmond, great fortunes were made from the buying and selling of human beings,” the NAACP’s Thompson told members of the City Council on Sept. 12 while a large group stood behind her to lobby for making the protection of slave history a priority. Many of the city’s large corporations, prospering today, were built on the slave trade, she said.

At a shrine at the burial ground I’ve found burned candles, pieces of fruit, things left as offerings to show respect to those who were forced to give their lives to build America’s economy.

On the information marker is an interpretive image of Gabriel, which Edwards painted. His face appears steeled.

On a visit with her I asked her to describe his expression. It’s the moment after he’s been captured and he’s contemplating providing details of the revolt plot to the governor. But then he realizes that the struggle for emancipation will live on, and he changes his mind and stays quiet.