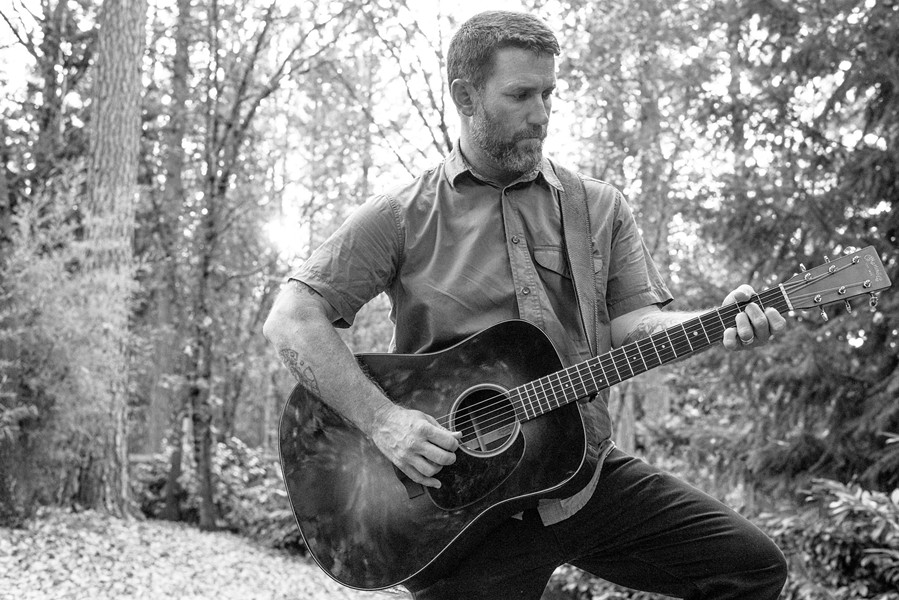 Chuck Ragan, singer and guitarist from the Gainsville punk rock band Hot Water Music, will be performing his solo acoustic material at Final Gravity Brewing in Lakeside this week.

Chuck Ragan’s earliest musical memory is sitting on the floor in front of his grandparents as they played music. Paw Paw played accordion and Maw Maw banged on a tambourine as they sang Cajun and French tunes for the family.

By high school, he was listening to what he calls “a strange mix” of music: Minor Threat, Sex Pistols, Metallica, Midnight Oil, Doug Kershaw and Social Distortion. When he was 19, Ragan helped found Gainesville band Hot Water Music, along with Chris Wollard, Jason Black and George Rebelo, with later addition Chris Cresswell.

Being part of the punk scene in the '90s had its good and bad aspects, he explains.

“The highlight was that it felt very free and dangerous, not to mention connecting with people of a like mind,” Ragan says. “The lowlight was that it certainly wasn’t as accepted in social circles, schools or society as it ended up being a handful of years later. So there was an awareness that you’d be looked down upon, made fun of, beaten up or harassed.”

When Hot Water Music disbanded in 2005, Ragan’s music went off in an acoustic folk-inspired direction and it’s that sound he’ll be bringing to Final Gravity Brewing on Feb. 24 for a solo show. “I was playing acoustically long before the band and had written and played that way all through the band,” he says, admitting that he never did much with it because the band was so busy. After the band regrouped and then broke up a second time, Ragan focused on carpentry and attempted to leave the music biz behind.

Funny thing was, he kept on writing. He’d come home after work and play to wind down.

“I was newly married to my sweet Jill, and we were living in L.A.,” he recalls. “One evening, she suggested that I record some of this material before I lost the songs, which happens often if they aren’t documented.”

Mitchell Townsend, a friend in Orange County, approached Ragan and told him that when he was ready, he’d record the songs in a makeshift studio set up in the laundry room of his house. It was there that “The Blueprint Sessions” were created. Ragan reunited with Joe Sib and met Bill Armstrong and signed to Side One Dummy Records.

Ragan is performing solo acoustically in Richmond the night before playing with a reunited Hot Water Music and Richmond stalwarts Avail in North Carolina. Musically, Ragan doesn’t see the two shows as all that different. “I put a lot of energy [into] both, so the main difference is just being by myself,” he says. “Having everything stripped down, there ain’t much to hide behind. Still rattles the bones a little, but that’s what I love about it.”

While Final Gravity has a bluegrass jam on the first Tuesday of every month and occasionally hosts acoustic bands, music isn’t a regular thing. When a friend asked Ragan if he’d do a show in Richmond while he was in the area during the tour, he suggested Final Gravity Brewing as a good fit for his acoustic solo stuff. “I thought it would be a nice change from the more bluegrass stuff we usually have,” says brewery owner Tony Ammendolia. “And maybe a few new folks would discover Final Gravity.”

With so many influences growing up – gospel, Cajun, punk, rock – Ragan’s music doesn’t fit neatly into any one genre.

“You’ll always have the ones that play timid and soft, or the ones that spit fire and play loud. Aggressive and out of control or focused and classy as all get out,” he explains.

His music has been described as Americana, country, folk punk, singer-songwriter, and acoustic storyteller, but he doesn’t get caught up or attached to any of labels. “To me, [they’re] just songs I feel passionate about and sometimes I have a band, sometimes I don’t. Sometimes I’m pretty good, sometimes I may be really bad. But I know that as long as I’m up there doing it, I believe in it.”

Another thing he knows for sure about playing and touring at almost 50 is what a rare opportunity it is. Plenty of musicians he considers far more talented in their playing and song-writing ability are either struggling or have thrown in the towel.

“I feel very fortunate that I’m able to grab a guitar and travel out of town, or out of the country, and have folks care to meet me halfway,” Ragan says, adding that it’s a blessing he doesn’t take for granted. “I’m not going to lie, I’m tired. I’ve done more than I ever dreamt I’d do in music, but now I have a young son and wife at home who need me there, so it’s very hard to leave home. That said, I’m grateful that these opportunities are here to help support my family and livelihood.”

He’ll be doing just that at Final Gravity, and, missing his family aside, playing a Richmond brewery has its advantages, namely “a cold beer and friends.”