"The Art of Getting By" has potential but needed a little less effort. 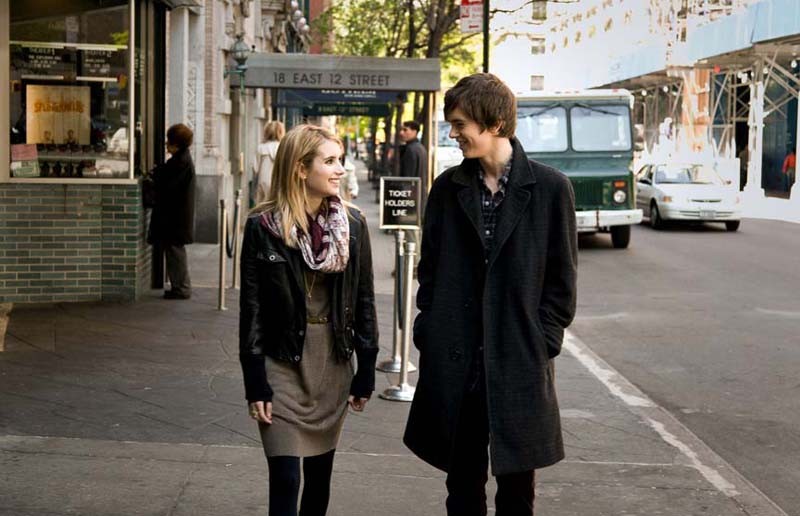 "The Art of Getting By" has been thoroughly panned as a shallow and derivative teen coming-of-age story. While it's true that the film's overwrought plot mechanics are less than thrilling, the story's convincing love interest makes it difficult to dismiss the film. A lot of it is pretty enjoyable.

The title refers to a premise, used mostly to bookend the picture, about a kid, George (Freddie Highmore), slouching through high school because he's misinterpreted Jean-Paul Sartre and Albert Camus. George doesn't want to do his homework because everyone is going to die anyway, an excuse that doesn't move his English teacher (Alicia Silverstone), his principal (Blair Underwood) or his mom (Rita Wilson). He's on the verge of getting kicked out when he meets Sally (Emma Roberts, daughter of Eric and niece of Julia), who introduces him to a smart set of kids who the principal worries might be the wrong kinds of friends for a troubled student.

Inside the movie's overly intrusive plot device, first-time writer and director Gavin Wiesen has inserted a surprisingly believable love story between George and Sally, a rich girl intrigued by George's nonconformist attitude and artistic talent. "You're weird," she tells him while they ditch school, which he takes as a positive sign. It's the kind of sideways compliment a teenage girl would say. Later George levels an equally serious accusation at a friend: "I thought you were cool." It's not Shakespeare, but it's within the bounds of high-school interaction and much more telling about these people than George's study habits.

Who cares why he won't do his homework? What's really interesting is why he'll go out with a girl who doesn't seem all that right for him. Roberts may not want to hear this, but Sally's prettiness is as conventional as George's misanthropic reading list and outdated Strokes haircut. We believe in these two because they're so much more ordinary than they think they are. The movie sends them on a couple of memorable dates, one that has something like an Alexander Payne vibe when we see the restaurant's special Valentine's menu.

The ensuing scene is a white-knuckle experience. By now we think George likes Sally, but we're not sure. Sally is flirtatious, but she may not be serious. George doesn't have the experience to read her or to take control of the situation. Sally thinks it fun to ask him for sex and then play it off as a joke. Upon hearing this, George is too flabbergasted to speak, a courtship-ending silence not played for humor. It's a surprisingly real and awkward development between two kids swimming out into water too deep for them.

Things get better for the movie the worse they get for George. In a classic rookie mistake, he introduces Sally to Dustin (Michael Angarano), an artist and alumnus from George and Sally's school. George is thinking of becoming an artist too. He's not thinking that playing so diffidently with Sally might allow his new mentor to swoop in. The result is not for the squeamish.

High hopes for the film also ensue. There's a moment, for example, when Sally catches Dustin's artistic pretentiousness out of the corner of her eye, and you think the movie might go the inconceivable route of satirizing its protagonists. But the scene passes, almost like an accidental insight, and the movie all of sudden recalls it has an important plot contrivance to wrap up. Because George began the movie failing school, something must be done, which brings on a series of uninspired epilogues, including a soul-searching talk on a park bench. Even worse is an end-of-the-year ultimatum the high-school faculty gives George that could have been pulled right out of an episode of "Saved by the Bell." It's as if the audience is supposed to believe that the rest of his life is going to be just fine if only he can make up his trigonometry homework.

Life isn't a game show in which you run through the obstacle course correctly to move on, which the movie seems to recognize enough of the time to make it worth seeing even if the ending is a little false. George is going to learn that it only gets harder, and the obvious reasons to try may never materialize. He's a well-drawn enough character to make you wonder how he'll respond. 84 min. (PG-13)

Movies the art of getting by

The Art of Getting By