A tour of the Great Depression's most famous drinks. 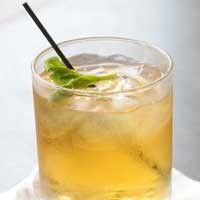 As the national unemployment rate continues to grow and our economic outlook appears bleak, many analysts have drawn comparisons between today's recession and the Great Depression.

The stock market crashed in late October 1929, in the midst of Prohibition. Though alcohol was illegal, many ignored the law, patroned speakeasies and made moonshine. There was a rise in the popularity of cocktails, or “flips.” These homemade drinks were used to disguise the taste of moonshine and other illegal alcohol.

This month marks the 80th anniversary of the beginning of the Great Depression. While today's economy might still be sour, why not relax with some libations from depressions past?

Bacardi
While Bacardi rum might originate in Cuba, this cocktail originates from the states.
1 A_ ounces light or gold Bacardi rum
1 ounce lime juice
A« teaspoon sugar syrup
1 dash grenadine syrup
In a shaker half-filled with ice cubes, combine all of the ingredients. Shake well and strain into a chilled cocktail glass.

Barbary Coast
The Barbary Coast was San Francisco's pleasure area, where a gentleman could find refreshment, gambling and ladies of the night. This creamy concoction will put you right in the middle of San Francisco's infamous fog.
1 ounce gin
1 ounce rum
A« ounce scotch
1 ounce cream
A« ounce CrA"me de Cacao
Mix all ingredients in a cocktail shaker with ice. Strain into a chilled cocktail glass.

Colony Club Cocktail
The Colony Club was the first social club in New York City established by and for women. The cocktail was one of its trademark drinks.
Shake well with cracked ice:
1 A« ounce gin
1 teaspoon anisette
Several dashes orange bitters
Mix all ingredients with cracked ice in a shaker or blender and strain into a chilled cocktail glass.

French 75
This is another cocktail with a debated origin, though most accounts say it was either developed by or for the French flying aces of World War I. Because of the wallop packed by this drink, it was named after the powerful French 75 mm cannon.
1 ounce lemon juice
A« ounce sugar syrup
1 A« ounce gin
Brut champagne
In a cocktail shaker, combine gin, lemon juice, sugar and ice cubes and shake to chill. Strain and top off with champagne.

Mary Pickford
This cocktail was created in Cuba in the '20s while silent film star Mary Pickford was shooting a movie on location. The drink's color is a perfect match for the curly-haired blonde.
1 A« ounce light Martinique rum
A¬ ounce maraschino liqueur
A¬ ounce grenadine
1 A« ounce pineapple juice
Fill a shaker half full with ice cubes. Pour all ingredients into shaker and shake well. Strain drink into a cocktail glass and garnish with a maraschino cherry.

Sidecar
There are many claims to the origin of this beverage, but all of them originate in France around World War I.
1 A« ounce brandy
A« ounce curaAao or triple sec
A« ounce lemon juice
Mix all ingredients in a shaker with ice, shake and strain into a cocktail glass.

The Zombie
This cocktail was created by Donn Beach at Hollywood's Don the Beachcomber restaurant. Beach made the cocktail one night for a friend before a trip. The friend had three, and said the drink had made him feel like a zombie for his entire visit.
1 ounce apricot brandy
1 ounce light rum
1 ounce dark or Jamaican rum
1 ounce lime juice
2 dashes grenadine
1 ounce orange juice
1 ounce Bacardi 151 rum
Mix light and dark rum and brandy in a cocktail shaker, add lime juice and grenadine. Shake and strain into a highball glass filled with ice. Add orange juice and then 151. Garnish with a cherry and orange slice.