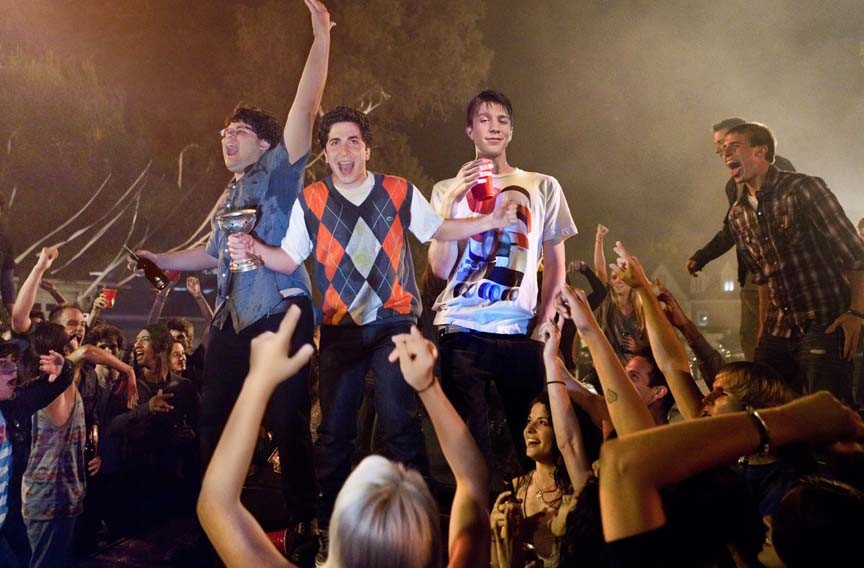 The film critic James Agee, writing about the great comedies of the silent period, noted of a typical Hal Roach film: "At full pitch it was Armageddon. But everything was calculated so nicely that until late in the picture, when havoc took over, every pie made its special kind of point and piled on its special kind of laugh."

Agee could have been talking about "Project X," a new teen comedy that ups the ante on teen comedies, only instead of pies we get beer bongs, tequila shots and a pugnacious dwarf stuffed into an oven.

Just as Agee noted about Mack Sennett's style, "Project X" is "simple and real … as a nightmare." A fast-talking, high-school kid named Costa (Oliver Cooper) talks his best buddy, Thomas (Thomas Mann), into throwing a weekend bash while his parents are away — a big party that will help celebrate his birthday and get them notoriety (and laid, of course). Thomas, an upper-middle-class kid in suburban California, is cautious, but Costa talks him into 30 people, max. Then 50. Then Costa posts the party to Craigslist. About 1,500 people eventually show up to enjoy the pool, kegs, DJs, topless girls, zip line, chandelier swing and the dwarf. Like pies, his every punch into someone's testicles makes its special kind of point and laugh.

You might be thinking "Risky Business," or "American Pie," but "Project X" is more like "The Hangover" times 100 people (it was produced by "Hangover" director Todd Phillips). It doesn't make any sense ("Project X"?) but its silliness is so nonstop, so over-the-top and continuously piled on, you find yourself laughing not just despite but also because of how stupid it all is, even after the SWAT teams and riot police show up in a futile effort to restore order.

"Words can hardly suggest how energetically they collided and bounced apart," Agee wrote in the same essay, "meeting in full gallop around the corner of a house; how hard and how often they fell on their backsides; or with what fantastically adroit clumsiness they got themselves fouled up in folding ladders, garden hoses, tethered animals and each other's headlong cross-purposes."

Maybe it's not quite that great, but replace some of those elements with blow-up dolls and Kanye West and you pretty much have "Project X." (R) 88 min. S