Former Tea party head Jamie Radtke joins the Kaine-Allen debate — although she must stand outside. 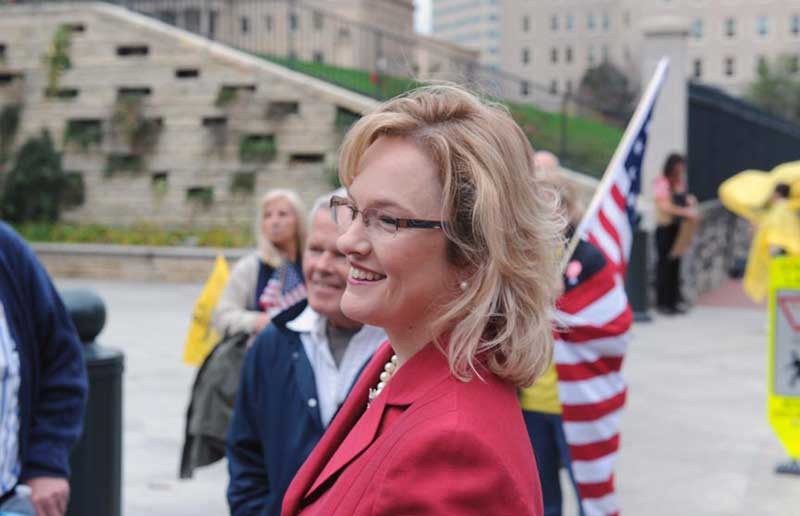 While two former governors stand in the spotlight, Jamie Radtke stands in the rain.

Radtke, once head of the Virginia Tea Party Patriots and now underdog candidate for the Republican U.S. Senate nomination, talks with supporters outside the entrance of the Virginia State Capitol last Wednesday afternoon. She isn’t invited to the high-profile Associated Press debate between Democrat Tim Kaine and Republican George Allen, which is about to begin inside.

Drizzle dampens the signs, but not the spirits of about 50 tea party enthusiasts who are gathered to object to Radtke’s exclusion. When a walrus-mustached man with a “guns save lives” button starts shouting about the National Defense Authorization Act, they drown him out by singing “God Bless America.”

Beside Kaine and Allen, there are seven candidates vying for the seat of Democratic Sen. Jim Webb, who isn’t running for re-election. All are excluded from the Dec. 7 debate because they hadn’t raised enough money (at least 20 percent of the frontrunners’ funds) or averaged 15 percent in polls.

Radtke claims only a sliver of support in the most recent polls, and has raised $391,845 as of Sept. 30, more than other long-shot candidates but far behind the frontrunners — through September, Allen raised $3.7 million and Kaine $3.6 million.

“What’s going on in there today epitomizes the frustration that the tea party has with politics as usual, and the fact that they think what Virginians want to see is two politicians battling it out over who has spent the most in the last decade,” Radtke says. “Because that’s really what that debate in there is going to be about, is who’s spent the most and doled out the most favors.”

She wasn’t far wrong. Kaine painted Allen as a hypocritical legislator who planted “time bombs in the budget” when he was a senator. Allen characterized Kaine as a spendthrift, tax-hiking governor and a crony of President Barack Obama.

After the debate, Style Weekly asked Radtke to answer a few of the questions that had been posed to Kaine and Allen.

Style: How, specifically, would you reform the tax code?

Radtke: I would like to reform the tax code in a way that eliminates all special-interest loopholes. I would like to basically eliminate the payroll taxes, the income taxes, the capital gains taxes, and move to something called a consumption tax, where you’re taxing consumption rather than income. It’s frequently referred to as the fair tax. And it’s estimated that that will bring between $11 [trillion] and $15 trillion worth of American business back to the U.S. You can imagine in an economy that’s been suffering with 8 percent [un]employment and higher for 30-plus months, that that would be quite a shot in the arm to the economy.

Should the state or federal government adopt a law defining life as beginning at conception?

Yes, it should. The Declaration of Independence talks about protecting life, liberty and you know, protecting private property. If our government cannot protect the fundamental right to exist and to live, there’s no assurances that it will be able to protect your property, or even your pursuit of happiness. So I believe that that is one of the fundamental rights of the government, to protect your ability to live.

Are you concerned about that making forms of contraception illegal?

No. I don’t think it has anything to do with contraception. I think that people who are pro-life do not object, for the most part, to the use of contraception. I think that that was a red herring in the debate, and I think Tim Kaine used that as a diversionary tactic. It has nothing to do with the discussion of whether or not you have the right to exist.

Who do you think won?

[Laughs.] What I said [in a press statement] was that Tim Kaine could prove Allen’s hypocrisy on debt and spending, and that Kaine easily exploited Allen’s support for higher debt and spending. I just felt like this is the very reason I’m running. … When I watched the debate, George Allen doesn’t have any credibility [on] conservative things when you’ve got someone like Tim Kaine pointing out the trillions in deficit spending, and vast expansion in the size and scope of government, and backing government subsidies to corporate interests. I think it just showed that Republicans need to pick a clear and credible and conservative nominee in order to beat Tim Kaine in November.

It sounds like you’re saying Tim Kaine was the victor.

I wouldn’t say that Tim Kaine was the victor. I just think that it showed the weakness of — if we’re gonna win in November, there needs to be a clear contrast. You can’t have an ultra-left-wing liberal candidate like Tim Kaine being able to go after George Allen’s hypocrisy on spending. That’s why we lost the House and Senate just a couple of years ago, was because you had Republicans like George Allen, who was in leadership in the U.S. Senate, who were voting for massive expansion of federal government and voting for salary increases and debt increases and all those things. And that’s problematic. If we’re gonna be Republicans and conservatives, we have to act like it. S