Remembering some of the people Richmond lost in 2014.

What a difference a year makes. Amid the holiday gatherings we’re reminded of friends and family who aren’t with us to welcome the new year. But they’re with us in spirit, along with other Richmonders who leave a legacy of enhancing the community. Here are some of them.

Edmund Ackell, the third president of Virginia Commonwealth University (1978-’90), died May 9 at age 88. He strived to meld Richmond Professional Institute with the Medical College of Virginia. The World War II fighter pilot and former pro baseball player held degrees in medicine and dentistry.

Dallas Simmons, Virginia Union University’s president from 1985-’99, died July 5 at age 74. He led a physical makeover of the North Side campus, including completion of the L. Douglas Wilder Library and renovation of the school’s original 1899 buildings.

Bill Bosher, an educational Everyman who served as state superintendant of public instruction, died Nov. 30 at 68. The down-to-earth educator also served as superintendent of both Chesterfield and Henrico county schools and professor of public policy at VCU.

They don’t make them like Sylvia Costen anymore. Feisty, well-traveled and a graduate of Columbia University journalism school, she was women’s reporter and women’s editor of the former Richmond News Leader from 1947-’86 — back when a woman’s place was on the women’s page. She died May 26 at 83.

A News Leader alumnus from the late 1970s, Joel Brinkley died March 11 at 61. After leaving the paper, he joined the Louisville Courier Record in 1978 where he won a Pulitzer at 29 for reporting on the Cambodian refugee crisis. He later wrote for The New York Times and taught journalism at Stanford University.

A respected photojournalist with a talent for human-interest shots, Richmond native Don Pennell died Aug. 2 at 85. He distinguished himself at Richmond Newspapers for 36 years.

Two passionate journalists who gave voice to underrepresented communities were silenced within a few weeks of each other.

Raymond Boone, relentless in his quest for social and racial justice, died June 3 at 76. His important career here — his often was a voice in the wilderness — included editorships of the former Richmond Afro-American and the Richmond Free Press, which he founded. He posed questions no one else dared to ask.

Jack Green, who died June 26 at 71, spent 30 years at The Voice, the community weekly he founded and edited. He always said the paper’s goal was to introduce “minorities to the majority and the majority to the minorities.”

Mark Licata, who died May 18 at 53, developed medical devices that saved lives. He was a founder of Bio-Track LLC and an executive with Intelliject, now Kaleo, an innovative company that added considerable luster to the Virginia BioTechnology Research Park.

Charles E. Wilkerson died Feb. 20 at 92. A member of the greatest generation who served in World War II, he returned to Richmond and became a partner of the Wright, Jones & Wilkerson architecture firm. His clients included the College of William and Mary, Virginia State University, the University of Mary Washington and VUU.

Tyler Potterfield was an architectural historian and dedicated city planning official whose knowledge, scholarship and inspiration will be sorely missed. He died April 25 at 55. At the time of his death he was deep in planning a new footbridge across the James River. Now, it will be named in his honor.

Fans worldwide were rattled when legendary lead singer David Brockie, aka Oderus Urungus, died in March at 50. There will never be another band like Gwar, and Brockie’s memorial was like none other. While thousands looked on, a Viking ship glided across Hadad’s Lake while an archer released a flaming arrow to ignite the floating bier.

Preston Harrison was a beautiful human being who loved Richmond but never forgot his Petersburg roots. The real estate executive, who died June 7 at 82, was a walking encyclopedia of transportation history and a guiding force behind the Richmond Railroad Museum in Manchester.

Beatrice Klein, who graced this city with quiet elegance and a modernist passion for drawing and painting, died Sept. 10 at 94. After studies at the Hans Hoffman School in Provincetown, Massachusetts, Bea co-founded the Richmond Artists Association. The Virginia Museum of Fine Arts owns her work.

World War II veteran James Erb had a passion for choral music that was infectious. The founding director of the Richmond Symphony Chorus from 1971 to 2007 and former chairman of the University of Richmond music department died Nov. 11 at 88.

At Thanksgiving, Richmond grieved the passing of Beverly Reynolds, a major figure in contemporary art here. The Reynolds Gallery founder died Nov. 23 at 68. But the gallery continues, and her legacy will include VCU’s Institute for Contemporary Art, a project-in-the-works she long championed.

Richmond could only claim Claudia Emerson, a Pulitzer Prize-winning poet, for one year before she died Dec. 4 at 57. The Chatham native distinguished herself at the University of Mary Washington before joining the English department at VCU.

There was no bigger mid-20th-century Richmond tycoon than Lloyd Noland Jr. — and he didn’t even live here. The Newport News resident died Feb. 7 at 96. He was president of Basic Construction Co., Biggs Furniture Co. and Richmond Hotels, which owned the former John Marshall, Richmond and William Byrd hotels.

Sam Chin, who served in the U.S. Army and was a prisoner of war in France, moved to Richmond after World War II. He co-founded the venerable Joy Garden Restaurant on West Broad Street with his brother, William. It remains one of the city’s most enduring eateries. Chin died Feb. 8 at 91.

Another World War II veteran and a Bronze Star recipient, Stuart Shumate, died March 9 at 98. His railroad career began in 1942. The public-spirited executive went on to serve as president of the Richmond, Fredericksburg and Potomac Railroad from 1961-’81.

Vernard W. Henley, who died Aug. 26 at 85, was chairman and chief executive of Consolidated Bank & Trust Co., the nation’s oldest black-owned bank. He is remembered as one of his generation’s most thoughtful and effective civic leaders and was brilliant at building bridges between blacks and whites in Richmond.

A gentleman who long graced downtown was Charles G. Thalhimer Sr., who died Sept. 2 at 94. When he retired as vice chairman of the Thalhimers Bros. in 1986, he was the fourth generation of his family to lead the storied department stores. An early cheerleader for VCU, he was one of the last links to the glory days of downtown retail.

Robert P. Buford III, who served in the Navy during World War II, joined Hunton and Williams when it had only 18 lawyers. Today it employs 800. He died July 20 at 88. This wise gentleman was instrumental in guiding the firm as it grew into a major international law firm.

A businessman whose name is synonymous with suburban development was Jerome Gumenick. His company built more than 5,000 houses and 10,000 apartment units, including Monument Square. The philanthropist died Sept. 30 at 85.

Mary Frances Warden Lambert died Oct. 10 at 102. In 1950, Lambert and her husband, Benjamin Lambert Jr., started Lambert Catering, a favorite for society events. It once was official caterer at VMFA and the Executive Mansion. Town and Country magazine wrote, “It’s not a party without the Lamberts.” 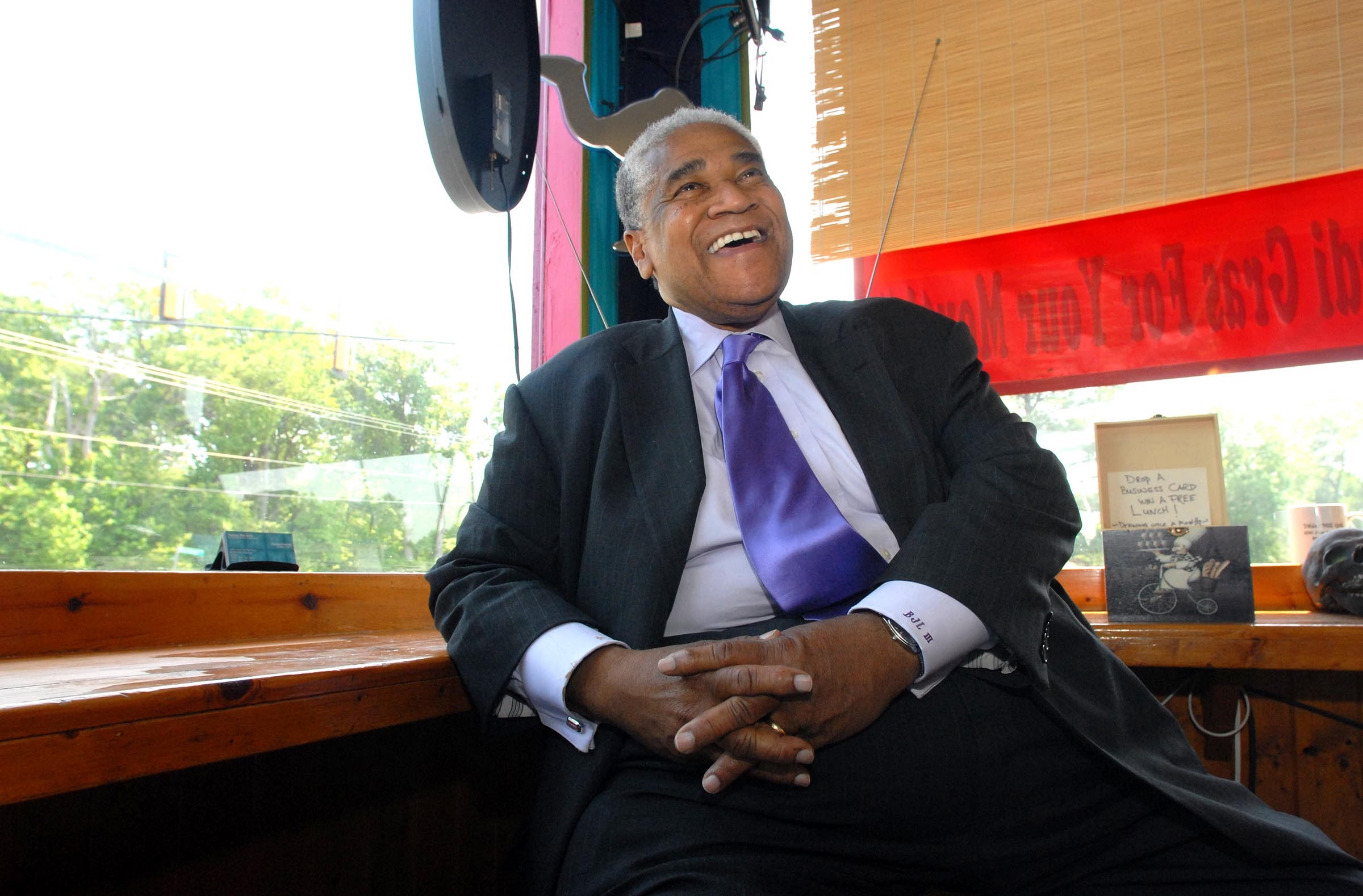 One of the Lamberts’ five accomplished sons, Benjamin Lambert III, died March 2 at 77. He represented Richmond in the Virginia House of Delegates from 1977-’85 and served in the Senate from 1986-2007. A Richmond optometrist known for his gentle demeanor, he worked with a range of community organizations.

Another effective Richmonder in the General Assembly was Joseph Benedetti. He died Nov. 19 at 85. A lawyer who loved theater, he was elected to the Virginia House in 1982, and then to the Senate in 1986, where he was Republican floor leader. He was awarded a Bronze Star for his service in Korea.

Jesse L. Mayes went to war in 1942 in the 555th Parachute Infantry Battalion and became one of the first black American military officers. He later taught military science at Virginia State, and in 1984 was the first black member elected to the Chesterfield Board of Supervisors. He died in July at 100.

Rachel Lambert Mellon, known as Bunny, died March 17 in Upperville at 103. Heir to a legendary fortune, she and her husband, Paul, showered the Virginia Museum of Fine Arts with major British and French impressionist works from the 1950s till her death. The Mellons’ names are etched with those of Sydney and Frances Lewis on the museum’s west wing.

Randall Stout, a Los Angeles architect and early advocate for green buildings, gave Virginians a kick in the pants with his Taubman Museum of Art in downtown Roanoke. He died July 11 at 56. The spiky roofed gallery was a harbinger that conservative cities can hatch and embrace bold architectural ideas.

Lorin Maazel, brilliant former conductor of the New York Philharmonic and Cleveland Orchestra, died July 13 at 84 in Castleton where he’d established a world-renowned music festival. One recent summer day, he uprooted his musicians and their instruments impromptu and motored here for a free concert at the Carpenter Theatre. Glorious.

He wasn’t from here, but many Richmonders were proud that United States Congressman Caldwell Butler was a Virginian. In 1974 the freshman Republican from Roanoke bolted from his party and voted to impeach Richard Nixon during the Watergate scandal. The former minority leader of the Virginia House died July 29 at 89.S