A Richmond designer finds a global audience for his "Desktop Gremlins." 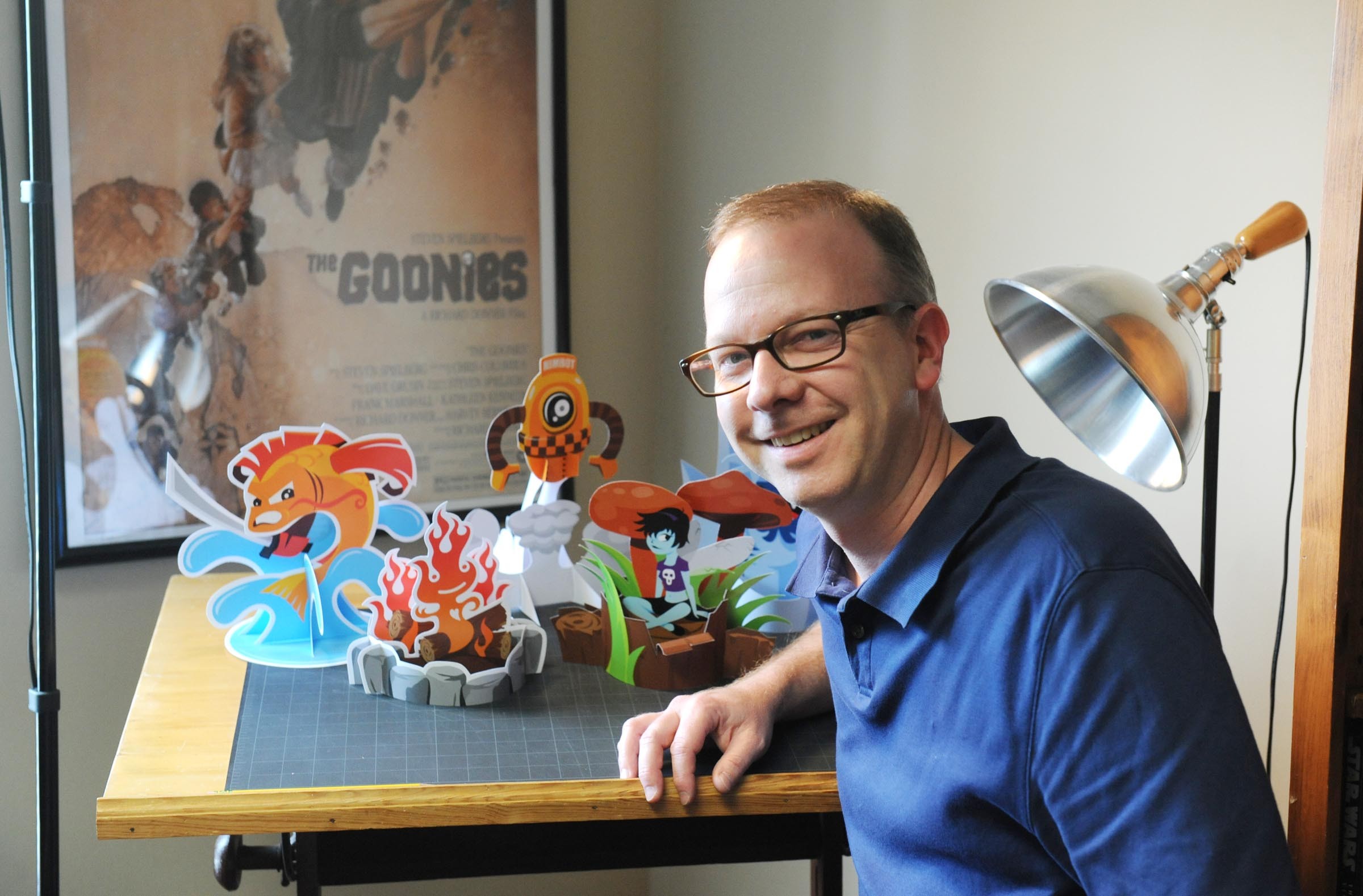 David Landis woke up at 1 a.m. with a vision of an octopus.

He jumped out of bed, sketched the creature on a Post-it note and went back to sleep. "I wanted it to stand up as a paper craft on my desk," the designer says. "I don't have a lot of spare time, so I wanted to make it quick — not messing with tape or X-Acto knives. I just wanted to grab scissors and put something together." Plus, he says, "I really, really hate glue."

Compelled by the rules he set for himself, Landis refined the drawing and built a quick website called DesktopGremlins.com. It was a nod to the '80s film, but he also thought gremlins could describe any kind of funky little character, good or bad.

All this from his original website, which began by offering free downloads of various paper characters, each with its own back story. "When I put something on my desk, I want it to have a reason to be there," he says. "A conversation starter or back story so people can explain what it is."

Landis' three children, ages 13, 9 and 6, served as sounding boards for his stories and inspiration for his characters. His daughter, when she was 4, drew a picture of a princess with sharp, pointy teeth. It inspired Zixie, a hybrid of a zombie and a pixie. "She's a helpful little fairy but you have to feed her any bugs in your office so she stays nice," Landis says.

The characters use a tab-and-slot design and form various loops, eventually creating a multi-tiered visual look with flat planes and curves that are almost sculptural in effect. It's different from origami, Landis says, which involves paper folding only. "I like putting them into a 3-D structure that has movement, or emotion," he says, "and you feel the depth of field in the simplest, most elegant way."

Landis, who's worked in advertising and graphic design for the past 20 years and owns Landis Productions in the South Side, credits his corporate clients with some of his crafts' widespread popularity.

Google contracted him to make paper craft downloads for its YouTube channel, Spacelab, which invites young people to submit experiment ideas to be performed on the international space station. Other clients have included the Russian Zeptolab, creators of "Cut the Rope" android game, and most recently Discovery Kids South America, which asked him to create paper crafts for a Spanish language children's educational show, "Doki." "They send me the artwork and my paper craft design can maintain the integrity of their character design," he says.

From the start, Landis planned to create a book. Last October he became aware of the Kickstarter campaign phenomenon. "I had built a big footprint" in the form of email subscribers, he says, "but didn't have a product." Within a month he raised $20,000 in pre-orders for a book version. "I used the system exactly like I believe they intended for it to be used. It enabled me to stockpile product that I can sell." Along the way, he made behind-the-scenes videos showing the progress, including how the book was printed locally at Zooom Printing on Westmoreland Street.

It's available for purchase through his website, the Virginia Museum of Fine Arts and he's working on a distribution deal for stores. Landis says he loves that his work is crossing so many boundaries, including different languages and different age groups — people as varied as kids and residents of assisted-care facilities have written him letters. He plans a follow-up book and is teaching paper craft classes at Art Haus in Richmond.

On the last page of his new book, the author encourages readers to follow their dreams. Sitting in his office off Huguenot Road, which is filled with graphic novels, paper cutouts, '80s movie posters, and a vintage Pachinko machine from Japan, Landis says he never would have been able to work with the top-tier clients he has lately, were it not for staying true to his original dream of the octopus.

"Last night, my daughter said to me, 'don't ever stop making these,'" Landis says. "That warms my heart." S