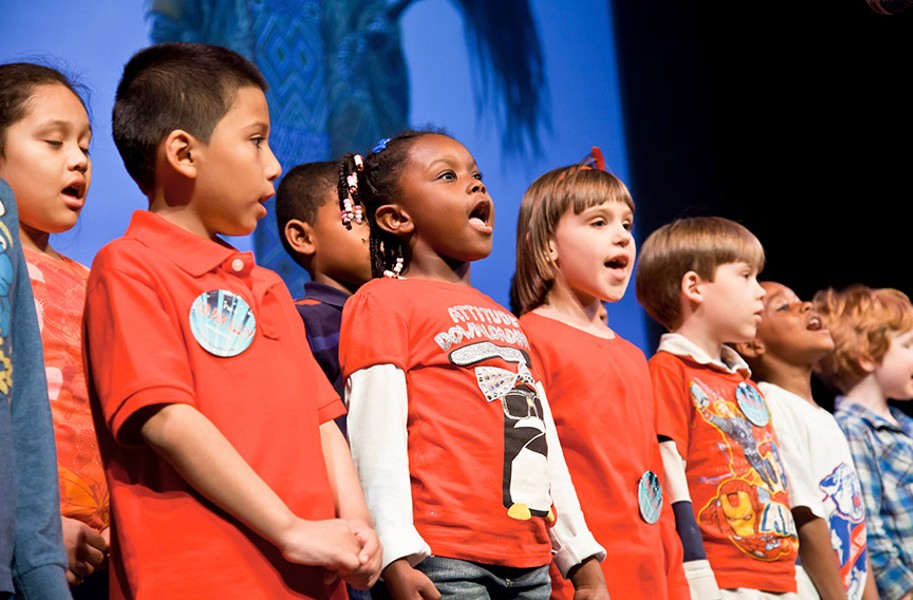 Kid Pan Alley, shown here in concert at the Virginia Museum of Fine Arts, helps kids create their own music through group songwriting.

The Kid Pan Alley had its date and location set: a weeklong songwriting residency at Patrick Henry School of Science and Arts, starting March 16. Unfortunately, that became the date for closure of the Richmond Public Schools. Despite organizing residencies across the country for more than 20 years, the nonprofit’s team had never encountered a situation like this.

But it has not only managed to find a workaround, it’s thriving in this changing environment. Last week it launched an online trial session with students from Pierce Elementary. Lonely children connected with friends—and, of course, stressed parents rejoiced. Now Kid Pan Alley is planning to open a new virtual platform to a mass audience.

“I didn’t expect [the quarantine] to happen quite as quickly as it did. It’s like they dropped the curtain on the show, but the rope’s broken and the curtains won’t open again,” says founder Paul Reisler. “We’re using Zoom now, which is actually working very well. We try to make the platform as transparent as possible.”

While the path to innovation has been swift and successful, it hasn’t necessarily been easy. Director of licensing Ryan Benyo says “ideally you’d be able to sing together with the kids in sync.”

Typically, Kid Pan Alley works with elementary school students in a collaborative classroom setting. Put 15 kids on a video chat, though, and suddenly that creative atmosphere turns into a tangle of indecipherable noise.

“So we had to take a more intimate approach, making the groups smaller and facilitating the conversation more actively so that kids speak and sing one at a time,” says Executive Director Jen Jacobsen. “Another challenge is the fact that we aren’t working with a group of kids who all come from the same school or community. This is going to be kids from all over Virginia and even nationwide as we continue to build the program.”

But bringing a range of talent together is a hugely transformative opportunity, Jacobsen adds. “We had plans to develop a pilot project that would allow children from different backgrounds to share stories and write songs together. And now, all of a sudden, this health crisis is launching our pilot program for us.”

Figuring out funding will be tricky, as these classes will continue to remain free, especially so that underserved populations can join. With income from residencies gone now, donations will play an important role, Reisler says.

Songwriting is still divided between two sessions. Kids continue to compose melodies, determine genre and write the bulk of the lyrics. Now they sing along over tracks that they receive online, which breaks up the recording process a bit.

As for subject matter, are the kids all writing songs about avoiding viruses?

“Not all the songs are about not getting sick, which is fortunate,” Reisler jokes. “The person teaching has to be every bit as engaged as the people learning. That’s what creates the excitement.”

“We’re trying to work with students at the highest professional level, not just give them something to put on a fridge,” he concludes. “Honoring their work at that level gives them a level of competence. It’s something they’re really proud of.”

For online workshops, visit KidPanAlley.org/online. Back to the Music Issue