“Avatar” reinvents the blockbuster while sticking to its proven attractions. 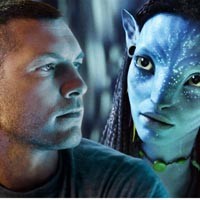 Although the movie industry is increasingly placing its bets on the home market, the makers of “Avatar” — notably, director James Cameron — have gone all-in on the theater experience in the three-dimensional version.

Attempting to recapture the wow factor of movies such as 1977's “Star Wars” and Cameron's own resume of technology-pushing blockbusters — which includes the record-breaking “Titanic” — Cameron and company have spent a ton of money to make this movie worth seeing at the movies, in all its Imax-screen, 3-D glory.

In terms of eye-popping visual grandeur it's by far the most advanced of the recent wave of movies using a reinvented 3-D technology, creating an experience that's truly new and not simply enhanced. The plot, however, is a comparatively mundane mix of recognizable action-movie tropes, centered on a surprisingly uninvolving love story. If you plan to see “Avatar,” see it in three dimensions. Otherwise you'll miss the very thing that makes it worthwhile.

The movie follows Jake Sully (Sam Worthington), a Marine on his way to the distant moon called Pandora to replace his dead twin as a liaison to beings known as Na'vi, a technologically primitive but sensitive race of 12-foot-tall, blue-skinned humanoids with feline features. They live in a Chrysler Building-sized tree, which happens to be on a large deposit of minerals coveted by a corporation from Earth. The corporation has assembled both scientists and military forces on a Pandora base, one group to study and negotiate with the Na'vi, and one to exert force if they won't relocate peacefully. Jake's job is to take control of an Avatar — a genetically engineered Na'vi body designed to accept his consciousness — cozy up to the Na'vi and gain information.

Cameron wrote the story, which, though frequently serving up political commentary, plays a mostly complementary role to the special effects — not surprising since the action auteur shelved the project until technology caught up to his vision for it. Though “Avatar” runs more than 160 minutes, it's always in a rush to get to the next amazing moment; dialogue is more often than not expository. On his first trip outside the base walls, Jake runs into a thanator, a cross between a tiger and a tyrannosaurus rex, which separates him from his group, sending him into the jungle and eventually the command of a leggy, half-naked Na'vi princess named Neytiri (Zoe Saldana). She takes Jake back to the big tree, and introduces him to her royal mother and father, who, based literally on a few minutes of conversation, agree to initiate Jake into the tribe. What happens next is always exactly what you think is going to happen, even sooner than you think.

Because Jake spends so much time with the Na'vi, learning to mount their flying creatures and navigate their thick forests, it's important to note that as a group they're one of the most embarrassingly stereotypical bunch of natives to ever hoot and holler across a movie screen. Forever beating their chests in proud warrior mode, they act less like wondrous and strange aliens than a bunch of actors who've seen too many bad cartoons.

Admittedly such gripes are less worrisome while watching “Avatar” than after. Be it thanator or Na'vi, as a whole the computer-generated creatures look like real creatures, not the glossy, dead-eyed versions usually walking around awkwardly in CGI-laden movies. It's possible to be lulled into simply taking in the unfolding battles and cliffhangers without the annoying awareness that you're looking at a computer-generated character or prop. And yet “Avatar” doesn't simply improve upon existing movie-making technology as much as redefine what this type of movie can do. You get the feeling you're looking at the beginning of a new era.

“Avatar” is a lot of impressive things, but it's also evidence that the bigger the budget the less confidence there is spending it on risky material. Echoes from the aforementioned “Star Wars,” along with “Jurassic Park,” “The Matrix” trilogy and Cameron's own “Aliens” are unmistakable while watching this movie. And that's not finding fault as much as pointing out a business decision, albeit a debatable one. Like many a heroic action movie before it, the ultimate goal from the perspective of a movie like this seems to be not so much the reinvention of a medium as the recreation of a proven formula. (PG-13) 161 min. HHHII