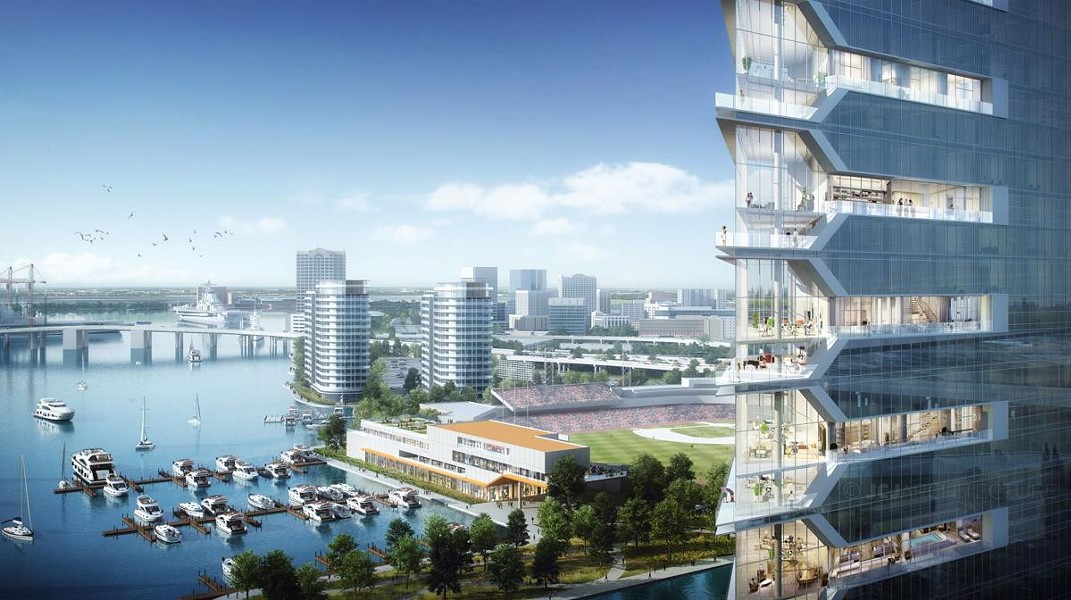 Courtesy of Jay T. Smith A rendering of the proposed casino site along the Norfolk waterfront near Harbor Park.

NORFOLK-The Pamunkey Indian Tribe is in negotiations with the city to purchase land around Harbor Park and eventually build the state's first casino.

Jay Smith, spokesman for the tribe and its financial backer Jon Yarbrough, said the real estate developer hopes to buy approximately 20 acres between the baseball park and the Amtrak Station.

The casino would be on the same scale as facilities the tribe had discussed before now: a $700 million property with a $200 million payroll that Smith says would generate an economic impact for the state of well over $1 billion.

"After looking at other cities, they chose Norfolk," Mayor Kenny Alexander said in a statement Wednesday. "The tribe's decision validates Norfolk as an emerging destination for tourism in the mid-Atlantic, and the center for entertainment in Hampton Roads."

The site is a stone's throw from the St. Paul's Area, which has more than half the city's public housing. The city is planning to replace the segregation-era public housing projects with mixed-use, mixed-income neighborhoods over the next decade.

Smith said the Norfolk purchase would not include the Harbor Park stadium, home to the Norfolk Tides baseball team.

"We envision rooms at the resort that would overlook the park so people could watch a game," he said. "The proximity to the Amtrak station is another big advantage to the location."

Earlier this year, the Pamunkey went public with their ambition to build the state's first casino. With Yarbrough's help, the tribe announced it had purchased 600 acres in New Kent County as a potential site. But Chief Robert Gray also said Hampton Roads was appealing "from a business standpoint."

The Norfolk casino isn't a done deal. Smith didn't give a timeline, and the tribe will need to jump through some hoops.

One is the type of casino. Class 3 gambling — Las Vegas-style table games and slots — would require state approval. But Class 2 gambling, which includes a certain type of slot machine and other games, does not.

Also, the ground under any Indian casino must be placed into a federal trust. To qualify for that trust, it must be "ancestral" land a tribe can say was once inhabited by its people.

Smith said that land needs to be in the tribe's possession before it would submit its trust application.

Gray, the chief, said in a statement the search for a perfect location has been long, and from the beginning the tribe said it would only go to a locality that welcomed the project.

"Norfolk has done just that."

He also said the tribe's ancestors lived, farmed and hunted across much of central and eastern Virginia — an area that includes Norfolk.

The tribe's 1,200-acre reservation — granted by treaty in the 1600s and located about 40 miles east of Richmond — isn't a viable site for a casino. It's already in a state trust.

Several dozen tribal groups called the area around Norfolk home when English colonists arrived in 1607. The tribes were all under an emperor-style chief named Powhatan — the father of Pocahontas.

"We don't say this is ours and no one else's," Gray said in an interview with The Virginian-Pilot earlier this year. "There was a lot of overlap with these tribes."

The federal Department of the Interior would decide whether the land is ancestral for the Pamunkeys, and can be put in a trust.

Kevin Brown, who was the chief of the tribe before Gray, called the claim that Norfolk is ancestral Pamunkey land "a long stretch."

"We weren't down there," he said. "We had dugout canoes and we went down the York River. We probably had excursions down there."

To get land into a federal trust, the tribe has to have a strong historical connection and a contemporary connection, he said. "The further we get away from the reservation, the more difficult it gets and the less confidence I have."

Brown said he worked on Indian gaming for the tribe for 15 years. He's no longer a member of council, and said he resigned a few years ago after coming out against the tribe's approach to casinos.

He said he's not against the idea of gaming.

Helen Rountree, a professor emeritus of anthropology at Old Dominion University who has extensively studied Virginia Indians, said her research has shown the Pamunkey territory, even for hunting, did not extend to the Virginia peninsula or further south to what's now Hampton Roads.

"The present day Pamunkeys will have real difficulty proving that their territory extended all the way to Norfolk," Rountree said Wednesday.

She said Powhatan was from a town in what is now within the city limits of Richmond, but ruled over tribes in a much larger territory. The Pamunkey tribe was one such "subject" tribe. Powhatan's territory did stretch down to the Hampton Roads area, she said.

But the Pamunkeys largely stayed in their area up near the headwaters of the York River. Plus, she said, the tribe would have no reason to come further south. Good hunting grounds existed to the west of Richmond, and another Indian tribe down by Hampton Roads would not have been welcoming to them, Rountree said.

Some people in Norfolk will likely welcome a casino. According to a Wason Center "state of the commonwealth" survey of registered voters, 64 percent of Hampton Roads residents support a tribal casino in the area.

"Hampton Roads is all about putting in a casino," said Rachel Bitecofer, assistant director of the center, located on the campus of Christopher Newport University.

Jessica Kliner, marketing director for the Downtown Norfolk Council, said it would make the city a destination, likely attracting "die hard" gamblers and resort-goers from elsewhere.

Tides general manager Joe Gregory said the possibility of having a casino as a neighbor is exciting.

"I think it's something that would definitely bring more people into the area," said Gregory, who recently returned from baseball's winter meetings in Las Vegas. "Somebody staying in the hotel might want to come over and see a game.

"And if and when it happens, we'd definitely want to strike up a partnership."