Taste with the eyes first at Amuse. 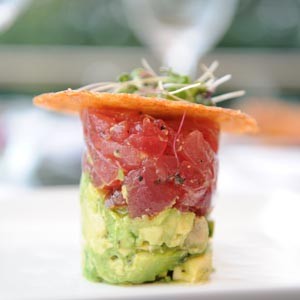 Now that the Virginia Museum of Fine Arts, with the opening of its magnificent new wing, has attained national status, it's only fitting that it house a restaurant of equal stature. Chef Greg Haley prepares first-rate food, with some of the plate presentations leaving the kitchen as edible works of modern art, but service in the spacious, glass-walled dining room is a work in progress.

Haley, who's cooked at Michelle's Hanover Tavern, the Hard Shell and Europa, has created a menu as contemporary as the surroundings, with local food well represented. The salad greens are from Manakintowne in Powhatan, the sausage from Surry, the grits from Ashland's Byrd Mill, the beef from Ayreshire Farms near Upperville, the honey from Hungry Hill Farm in Nelson County, goat cheese from Caramont Farm outside Charlottesville, and oysters and crab from area watermen.

The greens and goat cheese are, depending on the day, accompanied by mango and papaya or sweet and spicy pecans and sun-dried cherries, each in champagne vinaigrette. Either version gets a meal off to a fresh-tasting start.

The plump, juicy, fried oysters are the centerpieces of an appetizer that also combines sausage with Yukon gold potatoes baked in a mold. Bits of the sausage also float in a garlic and butter sauce that bathes a substantial order of Prince Edward Island mussels. An appetizer that looks like dessert — and is sweet enough to make do there — combines roasted beets and bleu cheese in an almond cream. While all of these are quite good, the biggest hits among the appetizers may be tuna tartare, graced by slices of avocado and whimsically topped by a star-shaped anise cookie, and a chewy mound of pork belly coated with Korean barbecue sauce.

Entrees lean toward seafood and fowl, with choices to satisfy both carnivore and vegetarian. Mexican and Cajun flavors suffuse red snapper and escolar, each arriving with just the right texture, while grilled salmon with French lentils lacks delicacy and moistness.

Likewise a roasted chicken with sage gnocchi disappoints, being dry and overcooked, but a poached, fatty leg of duck, lathered with a sweet port sauce, is not only beautifully presented, surrounded by apple goat cheese, but also pulled from the oven at just the right moment.

Wine also plays a role in a firm, lightly broiled halibut, with viognier enhancing the flavor of a diced vegetable-based stock. A trio of lamb chops, supported by roasted sunchokes, carrots, edamame and lemon yogurt, are crust and moist.

In-house desserts change frequently. Buttermilk pie, festooned with strawberries and whipped cream, is gobbled up at our table, even though our Kentucky companion complains that the real thing should be granular rather than like a soufflAc.

Prices are consistent with Richmond's better restaurants, with entrees $16 to $26 and starters $6 to $10. While dinner is served only twice a week, lunch is available daily and oddly, boasts virtually the same menu as at night, with smaller portions and prices. Sunday brunch ($8-$12) features shrimp and grits, huevos rancheros and cream-cheese-stuffed French toast.

Virginia vineyards are well represented on the wine list, with most bottles in the $30-$40 range. Pricing by the glass is an anomaly — three whites are $9 while the cheapest red is $13. A glass-backed bar and adjoining lounge area offer expertly mixed drinks and small plates throughout the day.

Amuse at the VMFA is open daily for lunch and serves dinner on Thursdays and Fridays. Photo by Scott Elmquist.

The design and setting is on a par with the best museum restaurants in New York; if only architect Rick Mather had provided a separate entrance as do the Wright at the Guggenheim and the Modern at the Museum of Modern Art. Because of that, for security reasons the restaurant is open only during museum hours. The same is true for the informal, ground-floor Best CafAc.

That limitation may be responsible for miscues by an inexperienced staff. During three visits we are seated at too-small tables in blazing sunlight; dirty dishes and utensils remain during courses and clean ones are removed before use; servers are unfamiliar with the menu and errors occur on the check.

Likewise the reservation system needs fine-tuning. Whether telephoning or using the suggested opentable.com, few times are available, even though when we arrive at the assigned time, tables remain empty throughout our stay. These shortcomings are easily fixed. With its spectacular location overlooking a reflecting pool and sculpture garden, Amuse, whose name resulted from a contest among museum workers, is guaranteed to be a destination for tourists and locals.