With the help of VCU's new "electronic strategies" professor, art students learn to sketch on the screen. 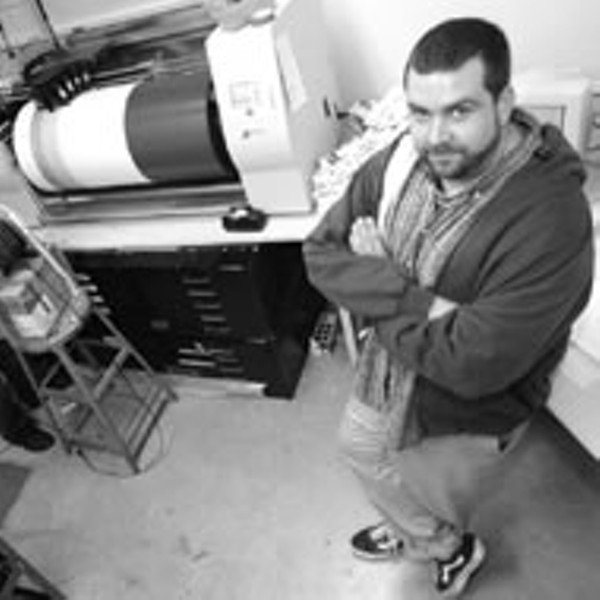 These changes have been expensive. The giclee printer alone was purchased at a bargain price of $22,000 ($8,000 of which was spent just on the software), but a cursory glance at the artwork recently generated within the department makes clear what an impact the new technology is having on Richmond's young artists. Hundreds of works have been printed on the giclee, and the new facilities allow students to digitally document their work, design art Web sites, alter and distort photographic images, shoot and edit video, edit sound recordings, design multimedia installation works, or simply develop the germ of an idea into a finished piece by using the computer as a kind of 21st-century sketchbook.

Baldes, who roams the long hall of the painting and printmaking department via scooter, is thrilled by the students' energetic response to digital technology, but he harbors no messianic expectations for the versatile medium: "It's nothing without a good idea," he says. Nor does he make any portentous claims about the digital revolution supplanting time-honored traditional media like painting. "I hope it affects how students go down the hall and paint," he says instead. "I don't want them to make stuff that looks like it was made by a computer — I want them to illustrate an idea. I want to see personality, I want to see poetry, I want to see metaphors. ..."

This co-mingling of the empirical and the expressive is nothing new for Baldes, who grew up a self-described "logical but ultraromantic kid" drawn to both science and photography. At Alfred University in his native New York, he majored in geology, but was tempted away from a science career by art student friends. He studied sculpture, finished his undergraduate studies at State University of New York at Albany and then returned to Alfred where he earned an M.F.A. degree in the university's new Integrated Electronic Arts program. Computers, photography and video were a part of his installation-based work from the start.

They still are, but technology is never the sole subject of his art. In a favorite piece, the artist placed video cameras on the front and back of a lawn mower, turned them on and mowed a lawn. The resulting two sets of footage documented, from a waist-level view, simultaneous "before and after" images of a cut and uncut yard. Baldes then edited each and showed them in various "multiscreen" combinations — on video monitors, as wall projections, even on the Internet. The resulting work — circular in form, meditative and humorous in spirit — is a characteristically unpretentious Baldes piece, rich in metaphor and concerned with making visual poetry out of simple, everyday things and activities. "I'm sort of a romantic about things that don't get noticed," he says.

He gets personal satisfaction from "the simple idea of using technology for good, for expression." But he refuses to "evangelize technology's use in art, because it's not for everyone." Still, he is outspokenly passionate about two of digital technology's essential qualities: First, there is the incredible speed with which a computer or digital printer can produce and manipulate images, allowing artists to investigate a myriad of ideas quickly, unhindered by traditional impediments like the need to erase or redraw. Second, there is digital's democratic nature, which via the Internet makes an incalculable mass of information available to anyone who can access a computer, and which via digital imaging allows anyone with a camera and a computer to quickly produce high-quality still or moving images.

"I'm interested in the fact that a 10-year-old kid can go out with a digital camera and make a broadcast-quality documentary that he can present to his class for 'show and tell.' That's powerful; that's the media being brought into everyone's hands."

This egalitarian ethos recurs in his own work. A recent project, dubbed "Artbus," would allow local artists to design artworks for the Greater Richmond Transportation Company's "full-wrap" bus advertising format, in which a digitally printed image covers an entire city bus. The "Artbus" would then serve as a "moving billboard" and deliver fine art to a variety of Richmond neighborhoods, crossing class and cultural barriers. Baldes is currently negotiating the project with GRTC.

In the end, it may be as a teacher that Baldes realizes his democratic ideals most completely. He insists that he's "learned more teaching than in two years of grad school," and at VCU he is known to students as a generous instructor and an accessible mentor. This makes him very popular.

Barbara Tisserat, a VCU professor who's been making lithographs for 29 years, isn't surprised. "Students think the world of him. He's a good listener, and he never has a narrow, clear-cut response to their work." Instead, she says, he focuses on helping individual students "to realize their own vision." "He's also from a younger generation," she adds, "and brings a younger perspective."

Does she feel threatened by the digital revolution that Baldes is ushering in?

"Not at all," Tisserat says. "Obviously, each traditional printmaking technology — etching, lithography, screen-printing — was at one time cutting edge. They originally had practical applications and then were investigated as tools for making art."

But she does suspect that the simple availability of digital printing will reduce the number of "traditional" printmakers. "A lot of people get frustrated with a process as laborious as lithography," she says. "I suspect that in the future many of them just won't be willing to go through the work."

Baldes would hate to see that. For him, digital is just "another tool," a new color for the palette. Indeed, when asked what high-tech artists he admires, he notes the relative youth of this media and is hard-pressed to name someone. After much thought, he seizes on video artist Paul Pfeiffer, then surprisingly adds that "in general, I would rather look at painting. ... Mondrian, for instance, is one of my favorite things to look at in the whole world."