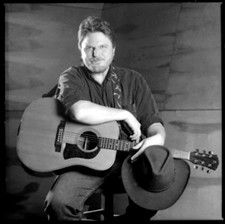 Page Wilson, a longtime musician and the host of WCVE's "Out O' the Blue Radio Revue," was found dead in his home in Mechanicsville this morning. The cause of death was not immediately known. Wilson, who described himself as a "purveyor of purebred American mongrel music," suffered from numerous health-related issues for more than a year.

"[I] took a pretty rough fall a bit over 4 months ago, when my knee went out (again), and dropped me on the ‘step stone' in my front yard," he posted on his website, pagewilson.com, some months ago in a message that asked fans and friends to help pay some of his outstanding medical bills.

"I broke my left shoulder," the message continued, "sprained something in my back, and still have a left knee that threatens to drop me again if I'm not a really good boy. It hurts to walk and, for the moment, to play the guitar; but that must change as I heal. I have a couple of good doctor friends who are trying to make some things happen, and I'm going to do my best to be a good, patient, patient. Try that without health insurance or money, and you'll have an idea of where I am today."

While Wilson was growing up, his father owned a Mechanicsville Texaco station and his mother played the piano and sang in the Northside Baptist Church Choir. The Hanover County native began his musical journey in the mid 1970s, winning a steady regional following with rootsy Americana LPs such as 1983's "Road Tired, Wired and Ready" and 1985's "Best of the Situation." A long-running live favorite with his band Reckless Abandon, the gravelly toned vocalist opened up for (and played with) a slew of notable musical acts through the years, including Kris Kristofferson, Taj Mahal, Stephen Stills and the Richmond Symphony. In 1999 his live "Bridge of Love" was released on Plan 9 Records' Planetary label.

In addition to donating his time to many charity organizations, Wilson was a member of the programming board for the Richmond Folk Festival (on which this writer serves). In 2009 he won a Theresa Pollak Prize from Richmond Magazine for his outstanding achievements in the local arts community. He also wrote a tune, "Virginia," that was once a contender for Virginia's official state song.

But most people will know Wilson from his radio show, where he hosted an all-star cast of visiting music-makers over the years -- from Mary Chapin Carpenter and Patty Loveless to Elvin Bishop, Delbert McClinton and the Clancy Brothers.

"For more than 10 years, Out O' the Blue Radio Revue has been a valuable part of our Saturday evening line up on WCVE Public Radio and we have appreciated the eclectic programming that Page has brought to our airways and our listeners," Lynne McCarthy, the communications manager of WCVE, said in a prepared statement released this afternoon. "Our heartfelt sympathy goes out to his family, friends and fans at this time."

Funeral arrangements have not been finalized.