The uproar over stimulus funding is reaching a fever pitch, but tracking the money is even harder. 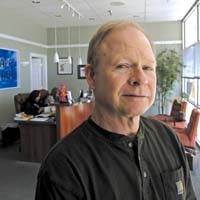 To get an idea of how loopy the debate over Barack Obama's stimulus spending has become, consider the plight of Mike Vines.

Vines, co-owner of Escape Massage, a health spa in Short Pump, been approved for a $168,000 commercial bank loan backed by the U.S. Small Business Administration to open a new outlet in Midlothian's Weschester Commons.

“It was totally out of context,” Vines says. “We never got stimulus money. A small portion of the SBA loan guarantee was backed by the stimulus. That's all.” He adds that “we could never get through” to the show for a correction.

Indeed, just a year after the passage of the $787 billion American Recovery and Reinvestment Act, assessing just how well the stimulus has worked is a nearly impossible task. It is difficult to find out how much has actually been spent nationally and in Virginia. Web sites list expenditures but they are often at odds with what localities report. “It's just too hard to track,” says economist Christine Chmura, head of Richmond-based Chmura Economics & Analytics.

Meanwhile, the debate over the stimulus has become especially vitriolic and is split firmly down party lines. President Obama says the program has created 2 million jobs, while U.S. Rep. Eric Cantor, the Republican House Minority Whip from Henrico County, claims that 3 million jobs have been lost while “billions and billions of dollars have been wasted.” Retorting, the Democratic National Committee has broadcast a national television advertisement chastising Cantor for bashing the stimulus while pushing, unsuccessfully, for $8 billion in federal funds to speed up passenger trains from Richmond to Washington.

Bob McDonnell, Virginia's new Republican governor, also has figured in the national controversy. A staunch conservative, McDonnell decries federal spending and budget deficits. Yet he, along with Minnesota Gov. Tim Pawlenty, another Republican, has been accused of being two-faced by the left-leaning Huffington Post Web site.

McDonnell cites as one of his early accomplishments getting $24 million in federal money to set up a state program to help doctors switch to electronic medical records while he paints federal funding as evil, the Post says.

A McDonnell spokeswoman notes a recent CNN story that reported that the funds were applied for by former Gov. Tim Kaine and that while McDonnell has been critical of the stimulus plan, he backs it since it originates with taxpayers. She says that at the end of last year, the stimulus funds had created 9,834 jobs in the state.

Such dust-ups indicate some basic problems with the stimulus program. Obama steamrolled the plan through Congress in nearly record time after taking office in January 2009. To gain speed, Obama allowed Congress to load up the stimulus with lots of pork that shifted its original intent. It had been seen has a way to get people back to work through bricks and mortar projects, but instead has been used to help plug recession-related budget holes in state and local governments, especially for education and Medicaid.

The Virginia stimulus Web site shows that the state has received about $4.6 billion in stimulus money so far for the period of 2009-2011. Most, about $1.8 billion, goes to health and human services such as helping Medicaid, while another $1.5 billion goes to education. Fairfax County gets the lion's share ($154 million) while in Central Virginia, Richmond gets the most ($56 million), followed by Henrico County ($50 million), Chesterfield ($38 million) and Hanover County ($9.8 million). Allocations in the Richmond area generally track what has been allocated for similar-sized metropolitan areas such as Hampton Roads.

But that's where similarities break down. Localities are allowed considerable discretion in how they spend their money and often they choose between bricks and mortar and budget plugging.

Chesterfield, for instance, is spending its first-year allocation of about $20 million to plug the school budget during the fiscal crisis and save 275 jobs, says school spokesman Shawn M. Smith. Henrico has taken a bricks-and-mortar approach. Worried that the money wouldn't be available over time, the county used its $14 million first-year allocation to add classrooms at Lakeside, Tuckahoe and Dumbarton elementary schools and to help plan a new high school in the eastern part of the county, says spokesman Mychael Dickerson.

But in a bizarre sleight of hand, both cash-strapped counties are having to turn their second-year portions of their stimulus money over to the cash-strapped state to help plug its budget. “We were due to receive an additional $20 million for the upcoming school year,” Chesterfield's Smith says.

Henrico faces a similar plight. County schools had been due another $14 million, which they planned for capital projects, says Kevin Smith, assistant superintendent for finance, but now the state is reducing its funding to the county, making the second-year stimulus funding a wash.

Although plans to take away local school systems' stimulus money happened before McDonnell took office, the governor has presented more tough policies. His proposed budget would cut public K-12 spending by $731 million and his changes in the formulas for distributing fund will shortchange area school systems by millions.

In another example of how confused the system is, Virginia scores dead last among the states in the number of “shovel-ready” transportation projects that could receive stimulus money. The stimulus bill allows money to be spent on infrastructure projects such as roads provided that the construction can begin within a few months of allocation.

According to a survey of all ready-to-go transportation projects compiled in January by the American Association of State Highway and Transportation Officials, Virginia ranks No. 50 among states since it has only six ready-to-go road transportation projects worth $106 million. By comparison, North Carolina has $2 billion worth of shovel-ready projects and Maryland has $615 million worth. Curiously, Fairfax County is allocating $60 million to fix its roads and bridges, which is more than Richmond got for all stimulus spending.

To be sure, Virginia has used some of the funds for some capital needs, such as $1 million to expand broadband communications in poor and sparsely populated areas of the Eastern Shore. But it's uncertain how many sustainable jobs the stimulus may create.

Another issue is whether stimulus money intended for Virginia actually stays here. According to economist Chmura, if money is earmarked for a wind farm to generate power, much of it would “go overseas because that is where windmills are currently manufactured.”

One irony is that while just about all Republicans in Congress locked ranks and voted against Obama's stimulus, many, including Cantor, voted for another kind of stimulus,  President George W. Bush's $700 billion bailout of the financial and automotive sectors in late 2008. Cantor, whose office did not respond to requests for comment for this article, has said that the situation then was different because it was a “crisis.”

Any kind of stimulus doesn't sit well with Mike Vines who got slimed on the radio show, he says. “I don't think we need this at all.”