The John G. Wood School is part of the nonprofit Virginia Home for Boys and Girls and relies on community support and donations. This wish list identifies items needed for group homes and the school. 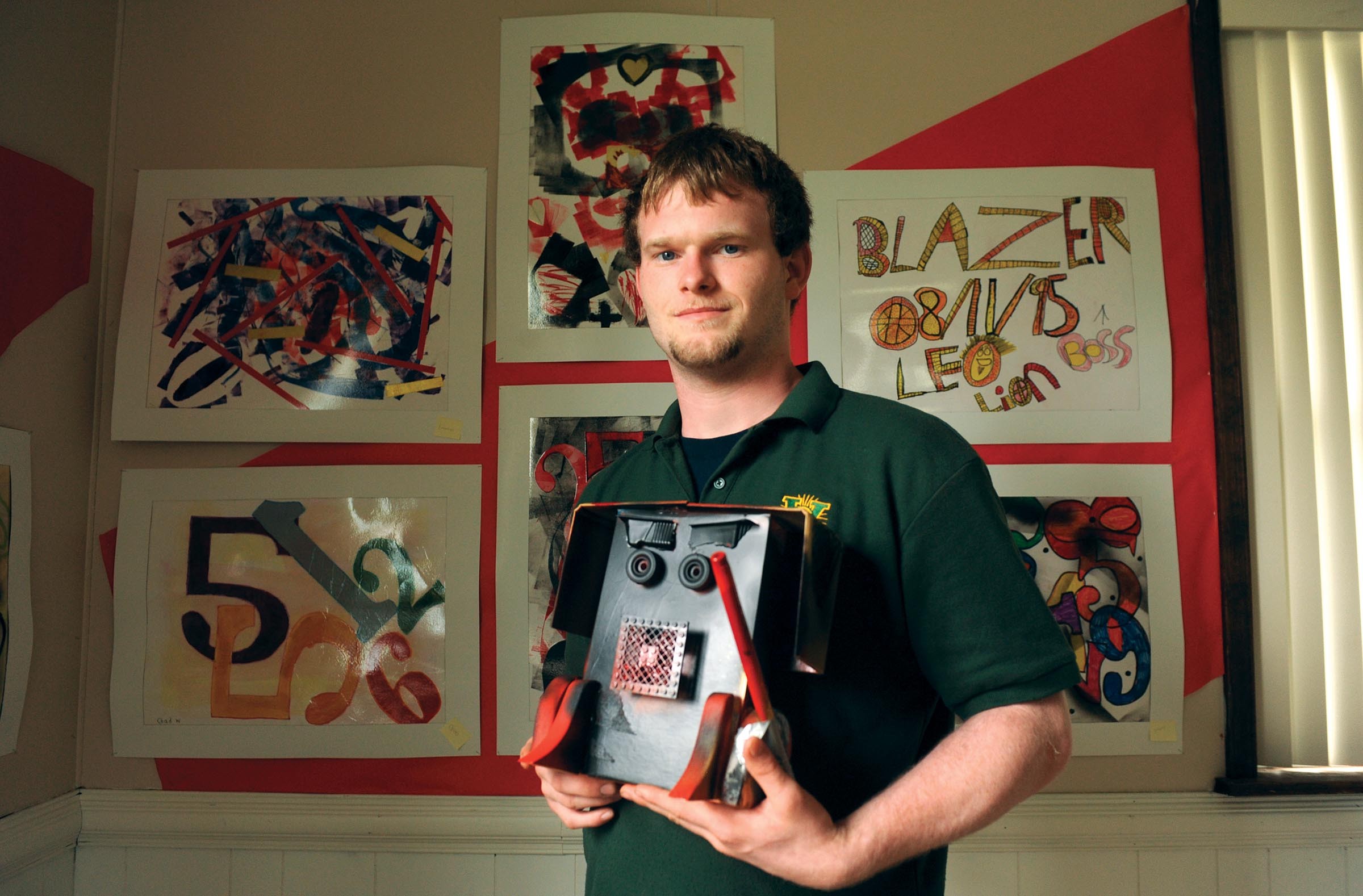 It feels like any other art classroom. The air is thick with the pungent smell of turpentine and sweaty kids. Long tables are cluttered with brushes and drawing tools. Half-finished paintings are scattered in nooks and a few vivid sketches and colorful pop art-inspired works beam from their spots on the wall.

Art teacher Melinda Mottley, 65, is cleaning the empty room after her final class of the day, a two-hour marathon with 10 students ranging from sixth-graders to 19-year-old seniors, some of whose medications were just wearing off.

This isn't a typical high school. It's the John G. Wood School at the Virginia Home for Boys and Girls, an alternative for at-risk youth who've gotten into trouble in the past and often have severe emotional issues. Most important, it's for young people who are taking steps to regain control of their lives.

Like Cameron Hensley, a 16-year-old who grew up in and out of foster homes and now hopes to attend college and study sports medicine.

"A year ago I was a very childish, immature person," Hensley says with a sharp gaze that belies his years. "This year I've turned around and am supposed to transition to public school later this year."

A big reason for the change involves his falling in love with the arts, he explains, and learning to paint portraits like the recent one he did of Dr. Ben Carson, the surgeon who escaped poverty to conduct pioneering work on the first successful separation of conjoined twins at the head.

"Art has made me look at myself instead of others," Hensley says.

His best friend at the school committed suicide. In her honor, Hensley recently organized a student suicide prevention walkathon, raising $1,850, he says — almost doubling the original goal for the American Foundation for Suicide Prevention. He's had friends who almost killed themselves before, and he now sounds almost jaded when discussing such tragedies.

"My view on it is, if that's what they think will make everything better, nobody can stop them," he says. "But I didn't see this one coming." 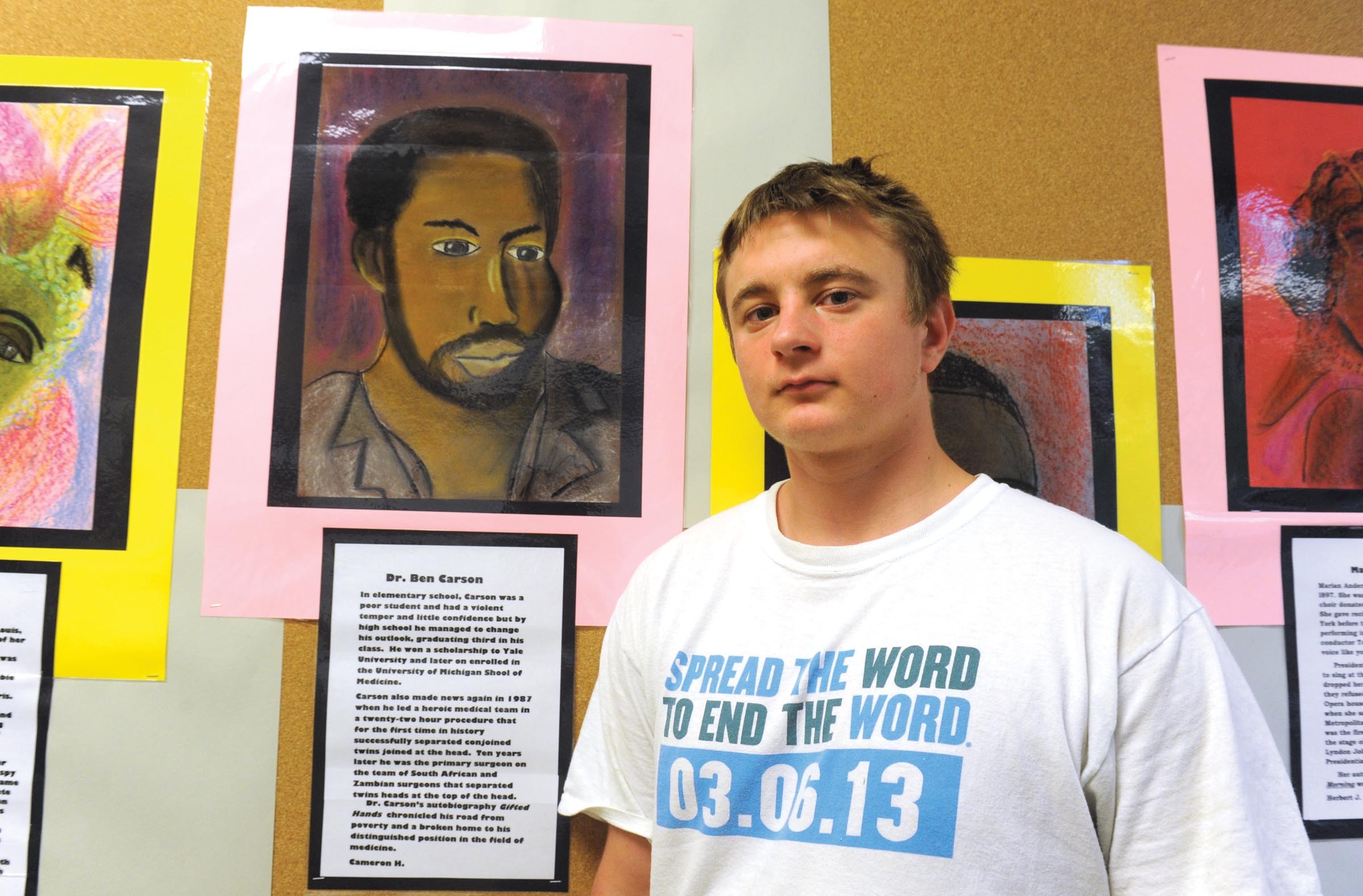 Michael Rhoades, a 19-year-old senior, says he likes the school because it's smaller and fewer fights break out. Rhoades eventually wants a job working with his hands, noting that he even learned how to sew at a shop in his neighborhood and enjoys quilting pillows and pillowcases for his mother. Writing poetry (see the sidebar) helped him learn to talk to people without using his fists, he says.

"When I look back all I see is destruction, when I look forward I wanna see something growing instead of falling apart," he says. "I'm really tired. I feel like I've been at war. Fighting gets tiring after awhile."

It might be the fighter in him that most respects his teacher, Ms. Mottley, whom Rhoades calls a "real passionate teacher who's not in it for the money." She's the one who got him into drawing self-portraits. "They don't last long because my dog gets into things," he says, chuckling.

But his work, along with others, will be on display at Crossroads Art Center in a show opening May 17. May is national mental health awareness month.

After 35 years of teaching in Richmond and Chesterfield County public schools, Mottley chose to work here instead of retire. She felt like she had a reservoir of experience working with a difficult population and didn't want to waste it, she says. And the thought of going to museums with her friends made her feel guilty.

She doesn't mince words: The work is exhausting. Almost too much these days.

"The intensity here is a lot different," she says, with a weary, end-of-the day laugh. "Everybody has different buttons. You have to learn the chemistry, and how you can respond to them, and how they respond to others in the room."

Although Mottley says she probably should've done this kind of work earlier in her career, she's still "a teacher at heart." She never can tell just how the knowledge she imparts will come back in some crucial way in her students' lives. Building their personal confidence is key. "These kids shock themselves all the time. It is so rewarding to see them discover this part of themselves," she says. "And it's a positive element, when so many things that have happened to them have been negative."

In some cases, she might be the teacher behind the door who saves them.

"If somebody is about to get in trouble and they're close to the art room, I just tell 'em to go in there," Hensley says. "Let yourself free." S