Out on the Prairie

Cowboys fall for each other in Ang Lee's riveting, landmark "Brokeback Mountain." 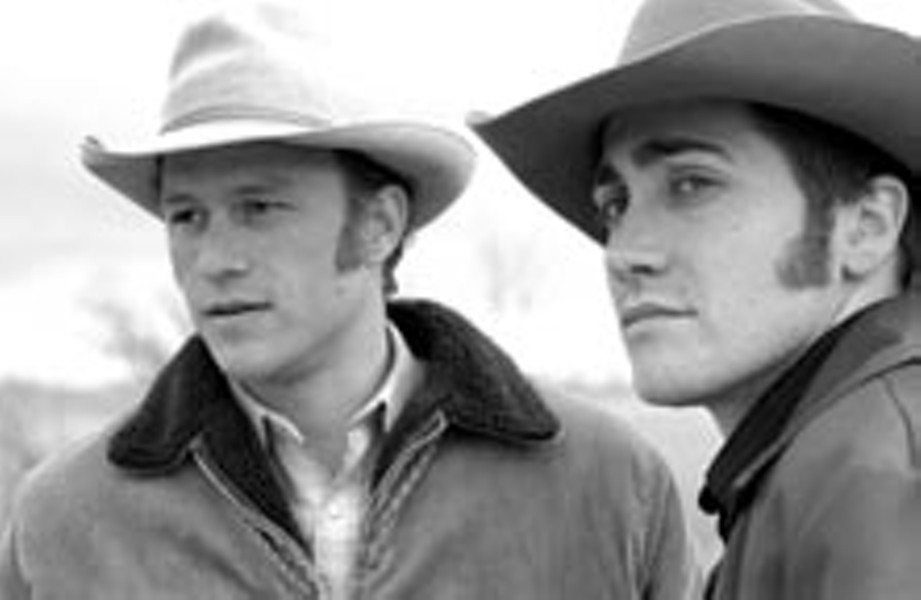 The film, based on a story by Annie Proulx, opens in 1963. Ennis and Jack are thrown together by chance when a rancher (Randy Quaid) hires them to summer his sheep on Brokeback Mountain in Wyoming. Jack is the more effusive one, a rodeoer with a chip on his shoulder, while Ennis emits only monosyllables — and only with the greatest reluctance. When, encouraged by some whiskey, he strings several sentences together, Jack is pleasantly stunned. One cold night forces them into the same cramped tent, and, as if out of nowhere, they throw themselves at each other.

Of the two, Jack is the most emotionally equipped to deal with this situation, but they're both bewildered by what has overtaken them. They assure each other that they "ain't queer," then promptly strip and retire back to the tent. There's not much sex on screen, and what is there is, by current standards, discreetly filmed. But in these scenes, the men are so conflicted that you can't tell if they're about to make love or beat each other up. It's as if they're trying to convince themselves that all this is nothing more than an unusual kind of manly roughhousing. Barely out of their teens, they lack the assurance to act decisively and split up at the end of the summer with shoulder slaps and mumbled goodbyes. They don't even trade addresses.

They both marry, have children and settle into routines that eat away at them. When, four years after their summer on Brokeback, Jack tracks down Ennis, they've wised up enough not to waste a moment kidding themselves; within minutes they're in a motel. The die is cast. What follows is two decades of furtive, sporadic "fishing trips," from which they return to crumbling marriages and increasingly embittered reflections on the life together they don't have.

Some critics have been bending over (backward, of course) to insist that "Brokeback Mountain" is a moving love story whose protagonists just happen to be men. However refreshingly open-minded that judgment may be, it's a little like saying that "To Kill a Mockingbird" involves the story of a wrongly accused man who just happens to be black, or that Matthew Shepard — who died in the beautiful high country in which the film is set — was a murder victim who just happened to be gay.

This is not simply a movie about love denied, but an exploration of the particular traps, emotional and social, waiting for gay men of a certain background and disposition. In "The Ice Storm" (1997), Ang Lee masterfully demonstrated his ability to expose what was toxic in the now exotic-seeming milieu of 1970s suburbia, and he brings the same rigor, and the same painstaking craft, to the deftly observed particulars of "Brokeback" — the trailers, shacks and combine dealerships against which the tragedy unfolds. The power of these movies comes from their refusal to deal in hazy universality.

The fine screenplay by Diana Ossana and Larry McMurtry admirably fills out the middle section of Proulx's story, and the stunted lives chronicled in the film often call to mind McMurtry's superb script of "The Last Picture Show" (1971). Gyllenhaal's Jack is a study in poignancy, but ultimately it's Ledger's Ennis who most devastatingly captivates our attention. Having witnessed as a child the aftermath of a ritualized murder of a local gay man, he's turned his quiet, stoic nature, a traditional value in a Western, into an elaborate mechanism of repression and self-torture. The movie's triumph is showing us how events can conspire to turn a man within a hair's breadth of happiness into someone who, in Ennis' words, is "nobody, nowhere." (R) 134 min. ***** S