Out of the Weeds

Bright Eyes is bringing a 14-piece band and chamber orchestra to Brown's Island. 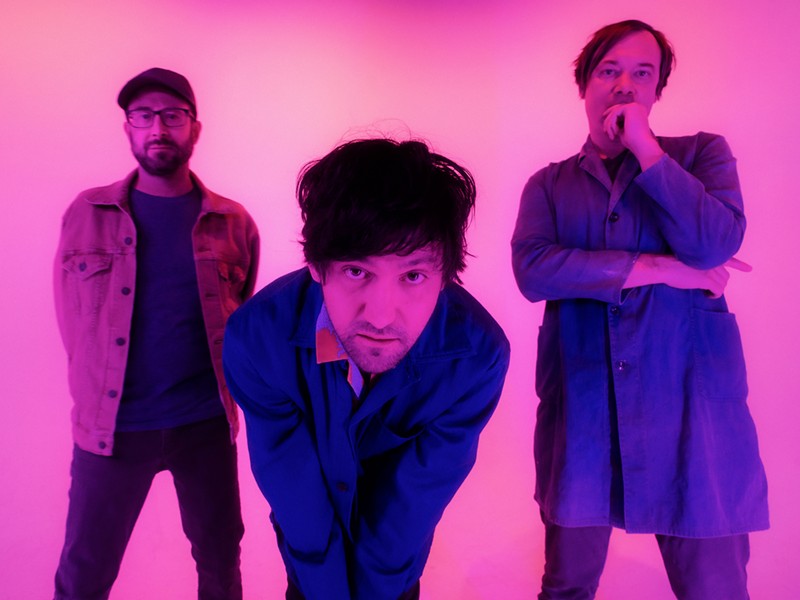 Shawn Brackbill Bright Eyes' Conor Oberst (middle) recently made national news for walking out of a concert two songs in, but plans for the band's upcoming Richmond show at Brown's Island on Thursday, June 2 are still on. Pictured beside him are Mike Mogis (left) and Nathaniel Walcott (right).

Nostalgia is a powerful feeling, but genuine duplication of a long-gone consciousness is almost always unobtainable. The modern media landscape can often feel fueled by the singular purpose of promising audiences they can once again feel that sensation of experiencing their favorite film, book, record, or childhood television show for the first time.

As the masses emerge to post-pandemic culture, this phenomenon seems to have permeated the live music circuit more than ever. One-hit wonders and ‘90s revivals clutter concert calendars across the country offering the same intangible promise.

The Bright Eyes show on Brown’s Island next week should not be counted among them.

While some might associate the band with a teenage crush (or heartbreak), Bright Eyes fans have never had to feel nostalgic. The band continues to produce new music, most recently 2020’s “Down in the Weeds, Where the World Once Was.” Even between official albums, the group’s three permanent members are far from stagnant.

Singer-songwriter Conor Oberst is constantly writing and touring new music on his own or with other musical projects, most recently Better Oblivion Community Center, a collaboration between Oberst and Phoebe Bridgers. Multi-instrumentalist Mike Mogis is a consummate record producer, performer, and engineer. He manages his own recording studio, Another Recording Company (ARC), in Omaha, NE. And pianist Nathaniel Walcott is almost always performing on records and composing arrangements for artists including The Red Hot Chili Peppers, Angel Olsen, The Killers, Dawes, and even gospel legend Mavis Staples. He’s also written scores for film and television, including the movies “The Fault in Our Stars” (a collaboration with Mogis) and “The New Mutants.”

Still, the permanent members of Bright Eyes have found time to put out ten studio albums under the moniker over a near 25-year span. And just because they’re careful not to be overly nostalgic, doesn’t mean they’re incapable of reflection.

Recently, the band moved to a new label, Dead Oceans, which released the most recent studio album. As part of this new chapter, the band will be re-issuing its entire back catalog of albums this week (May 27th), including re-releases of “A Collection of Songs” (1998), “Letting Off the Happiness” (1998), and “Fevers and Mirrors” (2000). Each LP reissue will be accompanied by a new companion EP featuring newly-arranged versions of five tracks from the associated album as well as “a new cover version from an artist they found particularly inspiring at the time of the original recording,” according to Dead Oceans.

Arranging the new versions of some decades-old songs involves a lot of “trial and error and experimentation in the studio,” explains Walcott. “We’ll talk about it ahead of time and decide what, if anything, from the original song, musically speaking, we want to honor, if at all. Or if we want to change it.”

The group was invigorated to revisit the back catalog following the completion of “Down in the Weeds, Where the World Once Was” -- mostly because that record felt like a zenith for the trio’s collaborative writing and composing process.

“Our process in terms of arrangement and production has evolved so much over the years, and it’s a way to shed a whole new light on a song,” says Walcott. “This is a way to apply our collective musical mind … to these older songs and come up with something that allows them to live anew.”

The new renditions are stacked with guest vocalists as well. Phoebe Bridgers accompanies Oberst on a haunting new version of “Haligh, Haligh, A Lie, Haligh” and Waxahatchee’s Katie Crutchfield’s voice floats above the mix on a new “Contrast and Compare,” which trades the sparse instrumentation of the original for a more Laurel Canyon aesthetic, including a brand-new trumpet solo from Walcott.

When it comes with pairing collaborators with the new tracks, “a lot of it will have to do with range, dynamics, and the personality of their voices,” says Walcott. In the case of the re-worked “This City Has Sex,” the new soundscape was entirely built around Crutchfield’s voice.

While Oberst is careful not to paint the new collection as self-indulgent, Walcott was less reserved when it came to looking back on decades of touring and writing, sharing some personal highlights. His fingerprints are all over the albums he’s recorded with the group since becoming a permanent member in 2005 – especially the new record: “My weird little harmonic DNA is all over those songs,” he says.

For an artist whose instrumental credits include performances on the flugelhorn, mellotron, and pump organ; one might think a Bright Eyes track with a cacophony of instruments would have been Walcott’s favorite to arrange. Instead he pointed to the undeniable musical thumbprint he left on “Lime Tree,” the heart-wrenching closer to the band’s 2007 LP, “Cassadaga.”

“I think that’s one of the purest collaborations between me and Conor. It’s simple but it’s very complex,” he says. “It’s not got a lot of bombast … but I feel like it’s one of my proudest moments in the Bright Eyes catalog.”

Looking ahead to the June 2nd show on Brown’s Island, Walcott is excited to come back to the town where he celebrated his 32nd birthday on stage at the National during the band’s “The People’s Key” tour in 2010. He seems most energized by the fact that the group is touring as a 14-piece band, including an eight-piece chamber orchestra as well as Jon Theodore from Queens of the Stone Age on drums.

“I really get to dial in arrangements with our strings and horns over time because we’re traveling with them,” Walcott explains. “In the past, we’ve hired people locally in each city. But now we’re pairing them with us so I can tweak the arrangements as we go and work with them every day.”

The Richmond show is part of the second leg of the band’s North American tour supporting “Down in The Weeds Where the World Once Was,” which was released during the dog days of the COVID-19 pandemic. Though Monday evening’s show in New Orleans was reportedly “amazing,” according to attendees, many fans spent the day expressing concern for Oberst’s well-being following reporting on the Sunday night show in Houston, when the singer walked off stage in the middle of the band’s second song, never to return. Though the band’s representatives have not responded to requests for comment and no statement on the incident has been issued via the band’s social media platforms; the show’s Richmond organizers confirmed on Monday that the Bright Eyes show on Brown’s Island will go on as planned.

Fans should expect a hearty dose of the new material, and Walcott seems eager to include material from the band’s 2005 effort, “I’m Wide Awake It’s Morning” on the setlist among songs from the back catalog, including maybe a B-side or two.

“I love playing all the “Wide Awake” stuff.” {…} “There’s always some sort of weird non-standards that I like to spice up the set,” he said. “Like “True Blue!” That would be fun to play. Maybe we’ll start putting that stuff in there.”

Bright Eyes performs on Brown’s Island on Thursday, June 2nd as part of the Live Loud Concerts series from the Broadberry Entertainment Group, presented by WNRN. Tickets are still available from $25 - $75 here. There are no COVID-19 entry requirements for this show. Doors open at 5:30pm via the 5th Street entrance only. Alex G is slated as the opener and is schedule to take the stage at 6:45pm.