Long a well-worn joke, Virginia Commonwealth University may soon give Rams football a serious look. But is it worth the financial risk?

Should VCU start a football program? 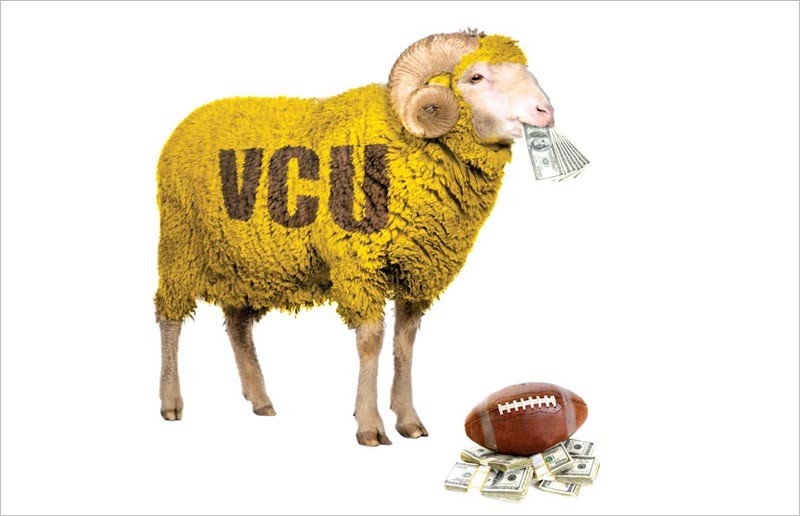 JUST A MILE southwest of Monroe Park, a handful of burly guys in black helmets and recently purchased shoulder pads pick themselves up off the dirt. It's just before dusk on a balmy September evening, and Virginia Commonwealth University's head football coach, Alfonso Bell, barks words of encouragement.

"Attaway defense," he yells, pleased with the team's progress during a light scrimmage at the 15-yard-line. It has no game to prepare for — Longwood University in Farmville canceled Saturday's contest — and the players must share Petronius Jones Park with a group of students playing Frisbee golf, but it doesn't much matter to them.

For years, the idea of football at the university has been nothing more than a punch line. The student bookstore sells T-shirts that chide: "VCU Rams Football. Still Undefeated." The university has seemed to relish its status as nonfootball school. It used to run print advertisements featuring a deflated football, boasting its rising academic prowess "without ever fielding a football team."

But as the school grew — it's now the second-largest public university in the state — calls for football intensified. The recent success of the men's basketball program, especially after the university opened the Siegel Center in 1999, added more pressure to consider the gridiron. Unlike basketball, a free-flowing sport with fewer players and many more games per season, football is more of an event. Teams are larger, with hundreds of players in shoulder pads and helmets, giving them the aura of gladiators. Games involve complex, warlike strategizing, which engenders a fandom with nationalistic qualities. For a university trying to shed its image as a commuter school, football seems the logical next step in VCU's growth.

Despite widespread interest among students and alumni, however, football is expensive and requires access to a stadium, or land to build one — things that VCU lacks. And football requires a university administration committed to overcoming those obstacles. The idea of starting a football program also was repeatedly rebuffed by a recalcitrant former president, Eugene Trani.

But since Trani's retirement in 2009, the football debate is back.

For the first time in years, VCU has a club football program up and running. The team played its first game Sept. 10 (it lost to Radford University, 19-18). The roster is filled with 35 students and university employees, and they play their home games at Thomas Jefferson High School.

"They're excited because this is the first time VCU has had a team in something like 30 years," says Coach Bell, explaining that while most are happy just to be playing again, others see a larger purpose. "They want to make it successful so it becomes another successful VCU sport."

The club team may be as close as VCU gets to NCAA-sanctioned football for a while, but it creates hope. New university President Michael Rao has said he's open to the possibility of starting a football program, but only if and when the hundreds of millions of dollars needed to build one from the ground up can be secured. To date, they haven't.

When asked if the university will conduct a feasibility study on starting a team, the university's athletic director, Norwood Teague, speaks in uncertainties. "We're going to do it," he says, "but I'm not sure when that will be."

Yet the idea remains on the table, an option to be picked up just in case the stars, and the donor dollars, align.

But is VCU ready for football? And a more practical question: In this time of fiscal austerity, does starting a football program at the university make sense?

FOUR YEARS, two months and 23 days. That's how long it took Old Dominion University from the time its board of visitors voted to bring back its long-dormant football program in 2005 to play its first game on Sept. 6, 2009.

The school spent more than $30 million to improve and build its facilities and practice fields, with a little less than $24 million of that dedicated to renovating the team's 20,000-seat, on-campus home at Foreman Field. To help pay the cost, student fees were raised to nearly $10 per credit hour. Much of the rest was donated by alumni and other friends of the university.

In its third season, the Monarch football team continually plays before sellout crowds. Season tickets have sold out in each of the last three seasons. Membership in the Old Dominion booster club has doubled, school officials say.

For the decision makers at VCU, the idea that ODU's apparent success could be replicated is tempting. Both schools compete in the Colonial Athletic Association, which is widely considered one of the leading divisions in the Football Championship Subdivision, formerly known as Division I-AA. Norfolk and Richmond are similar, boasting upwards of 200,000 residents, and enrollment at both schools tracks more than 20,000.

In VCU's case, enrollment tops out at 32,000, making it the largest public university in the state with no football team. So why does ODU have a team and VCU doesn't?

VCU graduate Rich Radford, who's been covering ODU football for the Virginian-Pilot since that 2005 board announcement, says the Norfolk school had the benefit of a motivated fan base and a willing partner in former university President Roseann Runte.

In addition, the school launched a successful fundraising campaign before the economy tanked, he says. And Old Dominion had the all-important advantage of an on-campus field to renovate into a new football stadium. VCU doesn't.

There are other reasons as well, most of them related to dusty economic concepts such as cost versus value, and whether VCU is willing to take the financial risk.