Out of the Park

A stadium-financing scheme, highly likely if not certain to fail, can be great for the developers of this Shockoe Bottom project while being a total disaster for the taxpayers. 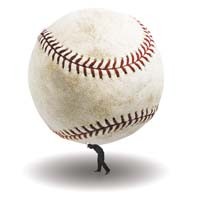 Sadly, President Obama's message about the need to change business as usual when it comes to spending public money isn't being heard on City Council or at the city's economic development office.

The Yogi Berra case in point: It is dAcjAÿ vu all over again with the city economic development officials playing cheerleaders for another attempt to get tens of millions of public dollars to bankroll a downtown baseball stadium.

In some significant ways this latest proposal is even more financially dubious and risky to taxpayers than the flawed Shockoe Bottom stadium proposed a few years back by Global Development Partners of Washington. That firm had the city's political leadership swooning until I was assigned the task of doing the actual work needed to get the true fiscal facts. So I asked the tough questions, did the detail work and found the numbers didn't add up.

The job of a public official is to protect the public interest. Those developers had their $350 million scheme to build a new baseball stadium surrounded by a giant footprint of stores, residences and office buildings. But when they couldn't answer basic financial or business questions or produce documentation or marketing studies required in the private sector, I knew the public's money had to be protected.

I believe that modernizing our schools, or bringing in new businesses that create good, permanent jobs, should be a far higher priority than building a baseball stadium in Shockoe Bottom.

Just because you have the power to do something doesn't mean you should. Based on the realities of the current economic situation, there's no way to build a baseball stadium without tens of millions in public money. This is one reality.

But there's a bigger and far more germane reality: A stadium-financing scheme, highly likely if not certain to fail, can be great for the developers of this Shockoe Bottom project while being a total disaster for the taxpayers.

The reasons are many. This promised new minor-league team will be owned by people with no proven record of running a baseball team. The Richmond Braves leaked a million dollars in red ink while being owned by a highly respected baseball outfit, the Atlanta Braves. Team officials told me their Richmond franchise was a money pit.

How do we know these owners have the resources to stay in business if losses mount up? For example, the backers of the performing arts center project originally said city money wouldn't be needed to pay for operational expenses. But now the city has agreed to pay hundreds of thousands of dollars every year to cover such losses — even before the doors have opened.

And there are other revenue streams the ballpark developers aren't telling the public about. Why not pledge the revenue from the stadium naming rights to pay off the bonds? Could it be that the project backers want to keep that money for themselves?

We could easily find downtown what we now have on the Boulevard: an aging stadium, rusting in plain view of all the tourists racing past Richmond on the interstate, without any baseball team. At least at the Boulevard, we have a regional authority backed by surrounding local governments, and the cash flow from stable sources of revenue.

For the Shockoe Bottom ballpark, the developers are proposing that Richmond go it alone, creating a municipal authority to run the arena and fund its creation with bonds worth $70 million.

This raises the self-evident in today's fiscal climate. Given that major localities are having trouble selling their general obligation bonds — that is to say bonds backed by the pledge by the city to tax its citizens to the teeth if need be to pay them off — then at what price would investors buy $70 million of some highly speculative new authority bonds backed by the promise of future tax revenues from retail, office and residential development that might be built several years in the future?

The financial consultant to the proposal assumes an interest rate of 6.5 percent. But even using this bottom-line figure, the amount of interest on the 30-year bonds would exceed the principal amount by $30 million.

Net, net: To finance the stadium, and without any direct capital investment from the developers or baseball team owners, the new authority would need to not only borrow the money to build the ballpark, but also pay the first few years of debt service on the bonds.

Moreover, by the new group's own figures, the amount of tax-generated revenue from sales, meals, property and other streams needed to pay bondholders would have to reach heights that rival some of those famous Shockoe Bottom floods, exceeding the comparable revenue generated at some of the biggest shopping centers.

When it comes to government, there's no such thing as a free lunch. That goes for the promise of a free baseball stadium. This latest scheme, saying that somehow the taxes generated from the development around the new stadium will magically produce all the money needed to pay off the bonds without drawing business away from existing retailers and restaurants in the city is not just too good to be true.

It is straight out of the Bernie Madoff playbook. S