The provocative "UnBound" photography show at Candela Gallery is more gritty than pretty. 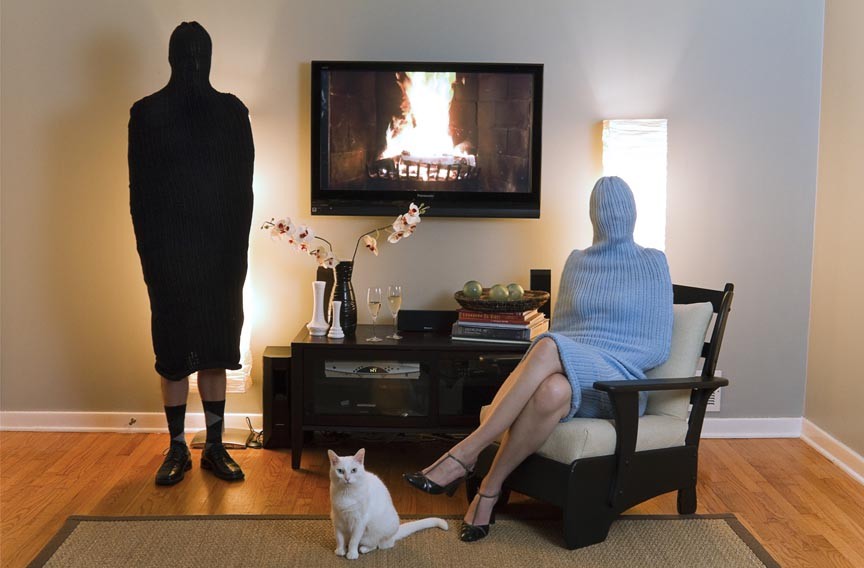 Don't look for a theme in the photography show, "UnBound."

Don't expect nudes, landscapes or photographs of flowers, either.

The first summer invitational and juried show at Candela Gallery is all over the map, and that's just what gallerist Gordon Stettinius was aiming for.

"I used to work at a stock photography agency, so I wasn't looking for pure beauty," he says. "I hoped photographers would share what they were most proud of and not try to pitch their energies towards an intellectual convention which I constructed for them. I prefer implied narratives that raise questions."

A photograph such as Alex Artz's "Melanie and Dillie, Canal Fulton, OH," which shows a woman with a doe on a bed, does just that. Who lets a deer in the house? Do the two share a bed?

The eclectic show was culled from almost 300 submissions from 32 states and 14 countries.

"I did face certain challenges," Stettinius says. "I originally planned to do 15 artists with two to three works each, but I got so many good works, I went this way. The quality of artists who approached me was really high. It was hard whittling it down this far, but that's what you do."

The result is 60 photographs representing a range of techniques, including encaustic, mixed media and silver gelatin prints. And, because this is the 21st century, digital.

"What digital has done to photography is energize artists," Stettinius says. "They're doing salt prints and daguerreotypes to keep their hands dirty. The current trend is in processes more than subject matter." One striking example is Joni Sternbach's three wet collodion tintypes, which look like vintage sepia-toned postcards of surfers and bathers in Hawaii.

Part of the motivation for the show is that the gallery wants to start a photography collection by purchasing some of the works in this show and eventually donating them to various institutions. For some of the photographers selected, it may be their first work held in a permanent collection.

To accomplish this aim, Candela Gallery will hold a gala July 20 with live music by Son of the Sea, followed by DJ Rattan of Bio Ritmo for a dance party. A raffle will be part of the festivities, with prizes such as Holga cameras, a Daniel Crawford sculpture, a portrait session with photographer Terry Brown and a 1950s aurora borealis crystal necklace.

Dixie Donuts is even designing an UnBound doughnut for the occasion, and a variety of activities are on tap — like weight guessing. "It's going to be corny," Stettinius says, laughing. "There's no map for this idea, but we want to make it a good enough time that people feel like their $35 is well spent."

Proceeds from the event will fund the purchase of four to nine works from the "UnBound" exhibit.

"The show is a survey of a lot of different styles of photography with some excellent examples of alternative processes," Stettinius says. "The event is zero profit for the gallery. The thing is to put my event where my mouth is." S