A Richmond professor teaches his students about in-depth journalism through his connection with a reporter walking the globe. 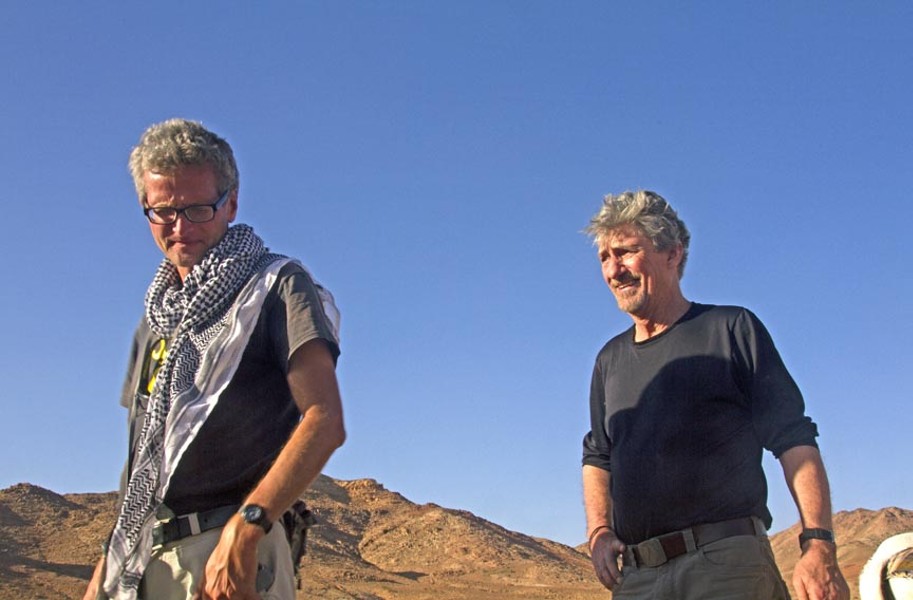 Charlie Belt Don Belt, right, joined Paul Salopek in traversing the deserts of southern Jordan. The veteran journalists walked north from Aqaba to Guweira, some 80 miles, by way of Wadi Rum, a beautiful remote area where scenes from the 1962 movie “Lawrence of Arabia” were filmed.

Step-by-step, village-by-village, the two-time Pulitzer Prize winner, author and former National Geographic staff writer is retracing the pathway of early mankind from Africa to the tip of South America dating back some 60,000 years.

On his back, Salopek carries a pack stuffed with clothes, food, water, a tent, a cellphone, a satellite phone, video cameras, a laptop and a portable solar panel rig that he can use to recharge his batteries whenever there’s enough sunshine.

The gear may be high-tech but Salopek’s approach is anything but.

As the 52-year-old lingers in spots, he sends back missives via social media that are tweeted and posted on a website. His reports are used as teaching tools in high schools and colleges. Eventually, he’ll hike across 30 national borders in Africa, Asia and the Americas, ending up at the southern part of Chile.

“It’s really taken on a life of its own,” Salopek wrote in an email to Style from the Republic of Georgia. “A lot of students are walking their own learning journeys, independent of my particular path, and that gives me great satisfaction.”

Salopek’s project “is a new look at slow journalism,” says Alex Moen, vice president of explorer programs at the National Geographic Society. “Walking and talking to people is a new form of storytelling, but it’s actually an ancient form.”

Helping Salopek run his two websites and organize his educational outreach is Don Belt, a former National Geographic editor who hired Salopek in 1993. Belt has settled in Richmond, where he uses Salopek’s Out of Eden Walk project for college classes.

Belt taught a course based on it at Virginia Commonwealth University last year and plans to take it soon to the University of Richmond, which will spearhead the college education segment of the project. Thousands of schoolchildren across the world are following along digitally through educational programs set up by the Pulitzer Center on Crisis Reporting in Washington and Project Zero at Harvard University.

Belt will set up college workshops that stretch “across disciplines,” Salopek says — “the walk’s ethos of close observation, extending attentiveness, and using our bodies as the main instruments of gathering information apply to everything from the hard sciences to the arts and humanities.”

“Paul’s example is useful,” says Belt, who’s traveled to 80 countries more than three decades for National Geographic, to spots such as Israel and Russia’s remote Lake Baikal. “It is an example of slow journalism, deep looking and spending time to understand the reality of people and places. I grew up with it, but modern kids raised in the media environment of today might not have been exposed to it.”

Today’s students are comfortable with instant texting and airing their thoughts in 140-character tweets. Belt says Salopek’s approach introduces them to new dimensions.

In one Ethiopian example, Salopek noticed the footwear he saw.

“In the affluent ‘global north,’” shoes cater to every whim, hipness, sexual availability and social status, he writes. But in poor places such as Ethiopia, “millions upon millions of women, men and children” slip on “cheap, democratic, versatile” sandals that are available only in “black, red, brown, green, blue.” With regular repair, he notes, the sandals last for years.

Salopek then crossed the Red Sea from Djibouti to Saudi Arabia, where he walked up the west coast to Jordan. Belt joined him for two weeks hiking in Saudi Arabia. Next came Israel, a boat to Cyprus and then another to Turkey where he ran into thousands of people fleeing Syria’s bloody civil war. He describes a scene:

“What happens when you become a war refugee? You walk. True, in order to save your life — for example, as militants assault your village — you might first speed away by whatever conveyance possible. In the family car. Or in your neighbor’s fruit truck. Aboard a stolen bus. Inside a cart pulled behind a tractor. But eventually: a border. And it is here that you must walk. Why? Because men in uniforms will demand to see your papers.”

His latest visit has been in Tbilisi, capital of the former Soviet Republic of Georgia. While walking through 7,800-foot-high mountains nearby, he describes his tour guide: “He greets us at the border checkpoint in new hiking boots. He carries inside his pack his father’s old dagger and not one but two large bottles of chacha, the grape vodka of his country. (This clear liquid is so volatile we use it to light fires.) Vito asks this often: ‘How do you like Georgia?’ He has never been outside of Georgia. He is 18 years old.”

Belt usually communicates with Salopek about once a week by email. He edits with the website managed in Washington by National Geographic and is around if Salopek needs something, but he rarely does. He manages to get money, deal with illness and find food with little trouble.

Richmond students have become absorbed by what Salopek reports electronically, Belt says. While teaching at VCU, he tried to get them to mimic Salopek’s walk. One method he used is to have them simply take a walk around the block.

“My methodology is to have them make a map,” Belt says. “You write down everything that is worth noting, every little thing.” Students can fill in the picture with smart phone photography and descriptive writing. “The walk around the block is a superficial experience at first,” Belt says, “but suddenly it takes on some meaning.”

The approach has sparked tremendous interest, Moen says, but Salopek doesn’t want it to be about him. Consequently, his walking companions, and even the animals he may walk with, become interesting personalities. The magazine has published four stories by Salopek about his walk and plans to run about one each year.

“I walk, as everyone does, to see what lies ahead,” Salopek says. “I walk to remember.” S

Don Belt will speak at the Richmond Public Library on April 10 at 7 p.m.